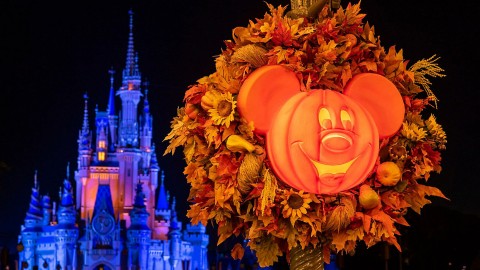 It may only be August, but it’s never too early to start celebrating the spooky season, especially when you're visiting the one place that truly does it best, Walt Disney World. So now that those pumpkins have started to take their pride of place on Main Street U.S.A, what better time to start celebrating!

While Disney boasts their very own world-class Halloween party (which we’ll get to in a second) there are also a variety of other exclusive celebrations for the Halloween season that can be found around Walt Disney World property, all of which offer both fun and frights for all the family. So without further ado, here are some of the spookiest things to do and see in Walt Disney World…

1. Trick or Treat around Magic Kingdom at Mickey’s Not So Scary Halloween Party

Walt Disney World’s spookiest offering comes in the form of their ticketed event, Mickey’s Not So Scary Halloween Party, which sees the park transformed into what is essentially a giant trick-or-treat trail, with a host of other exciting offerings sprinkled in! After you’ve filled your treat bag with candy, you can head to Cinderella’s castle to watch the ever iconic Hocus Pocus Villains Spectacular Stage Show, or find your spot for the Boo To You parade, all before rounding out your perfect evening with the Not-So-Spooky Spectacular fireworks show - there truly is no better way to get into the Halloween spirit.

Located at Hollywood Studios’ Hollywood & Vine restaurant, Minnie’s Halloween Dine is an exciting character-dining experience which sees Minnie and her beloved Disney friends don their best Halloween get-ups and greet guests while you enjoy a delicious meal. This frightfully spooky twist on your classic character-dining experience means that guests are in for some special and certainly seasonal-inspired interactions as you gander at each of the character’s wonderful costumes.

Who said snack time can't be spooky too?! When you think of Halloween, you tend to think of sweet treats and that’s certainly one thing that Walt Disney World delivers on in abundance all-year round, however, Halloween is when they truly shine. Each Halloween season brings a whole host of frightfully delicious treats to both the parks and resorts, so if your favorite way to celebrate the season is to get your sweet tooth on, there’s plenty to sink your teeth into. Parks fans recently got an exciting tease of the spooky delights that will make their way into Walt Disney World this year, including an adorable Mickey Pumpkin cupcake and a hotdog inspired by Hercules villains Pain and Panic.

4. Check out the decorations or the annual Halloween parade at Fort Wilderness Campground

While Halloween brings a whole host of transformations to Walt Disney World property, none are quite as impressive (or unique) as those done by the guests staying at Fort Wilderness Campground who go all out with their super spooky decorations. From the giant inflatable Mickey pumpkins, to the neon-lit ghosts and ghouls around every corner, each Halloween season brings different groups of guests with their own incredible displays, so you’re in for a real treat every time. Plus, on Halloween day, visitors can also watch the annual golf cart parade, which sees groups dress their golf carts up as all sorts of weird and wonderful things - you’ll be blown away by the insane creativity this parade displays.

If you’re looking to keep it simple, however, the best way to get your spook on during a day in the parks is a ghostly tour through Magic Kingdom’s Haunted Mansion, which is certain to get the hairs on the back of your neck standing up. Or, if you’re looking for something a little more thrilling, you can hop over to Hollywood Studios and visit The Twilight Zone Tower of Terror for a frightfully fun time as you ‘drop’ in to the not-so-glamorous Hollywood Tower Hotel. Both of these attractions are staples within their respective parks and, naturally, run all year round - so they're the perfect way to get a quick spooky fix in the middle of a bustling park day.

What's your favorite way to ring in the Halloween season at Walt Disney World? Have you tried any of these spooky experiences? Let us know your thoughts by leaving us a comment below or on our Facebook page.