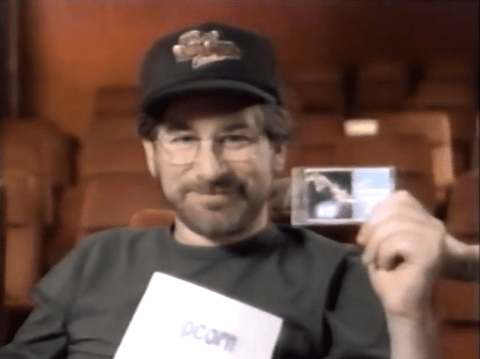 As one of just two remaining opening day attractions at Universal Orlando, E.T. Adventure’s consistent survival against an ever-changing landscape of innovation is often called into question. Although this colorful dark-ride still generates a considerable amount of nostalgia for many theme park fans, E.T. Adventure is undeniably ancient. Despite various refurbishments throughout its 32 years, the ride remains true to its 90s roots and unfortunately, now more than ever, sadly falls behind when compared to the ground-breaking attractions that Universal have continued to bring to their parks in recent years.

Despite being labeled by some as one of Universal’s more forgettable attractions, E.T. Adventure regularly finds itself at the center of various rumors and speculative discussions, many of which surround Steven Spielberg’s Creative Consultant contract with Universal.

These rumors vary in degrees of creativity but all center around the same idea, that Spielberg has blocked E.T. Adventure from ever closing its doors to guests, with some even going as far as to state that, “per contract”, the director could retaliate by calling for the removal of his other remaining property, Jurassic Park, over in Islands of Adventure. Presenting rumor as fact, some have even predicted that E.T’s closure could lead to the total collapse of Islands of Adventure as we know it, given Spielberg’s involvement with the second gate’s creation.

Where did the rumor stem from, and what do we know to be true?

For years now, Steven Spielberg’s professional relationship with Universal has been a major talking point for theme park fans everywhere. After working his way up from an intern position at Universal, Spielberg went on to sign a four-picture deal with the studio in 1975, a deal by which the true Spielberg/Universal collaboration began. In an agreement that greatly benefitted both parties, Spielberg was later brought on as a Creative Consultant for Universal Studios in 1987. LA Times has reported that this deal sees Spielberg take 2% of gross revenue from Universal’s two Florida parks, while Variety reports that this number is actually higher at 5.25%, though both report that the director also receives a portion of gross revenue from Universal Studios Japan as well.

Aside from the fact this contract is estimated to have earned Spielberg anywhere between $30-50 million annually across the past three and a half decades, perhaps the most lucrative portion of the deal states that these royalties belong to Spielberg in perpetuity, which quite literally means ‘forever’. Such an incredible sum of money, however, means that Universal not only receives the expertise of one of Hollywood’s biggest filmmakers but, as a theme park centered around movies, gets the official stamp of approval from Spielberg himself, which is truly a badge of honor that no other park can boast.

This partnership has seen Spielberg notably consult on not only the attractions themed around his own movies, but those outside of his filmmaking repertoire as well. Executive creative director at Universal creative, Jason Surrel, previously spoke to Gizmodo about Universal’s ongoing partnership with Spielberg, confirming that the creative consultant position means that Spielberg “reviews almost everything [they] create for Universal parks around the globe”.

From June 2010, Spielberg would have had the right to exit this deal and take a lump sum from Universal (valued at the cost of his deal with them going forward). However, in 2009 LA Times reported that, that year, a revision of the contract had seen Spielberg agree to delay his option to demand a lump-sum payment to 2017, ultimately signaling a symbiotic relationship between Universal and Spielberg and with nothing concrete having been officially reported since.

In terms of what is public knowledge with regards to this deal, this is pretty much the extent of it. Whether Universal and Spielberg have an agreement that sets a minimal expectation of Spielberg’s properties within the parks, has never been confirmed, and the ins-and-outs of what Spielberg has control over, if anything, have never been reported publicly. News that Spielberg had a hand in the creation of a number of attractions at Universal meant that rumors of his complete control over E.T. Adventure did not take long to spread like wildfire, given the director’s deep affection for the film. The reality is, however, that the majority of Universal and Spielberg’s agreement remains a complete secret to the general public.

Why this rumor holds little-to-no weight...

I think this article is written from a very biased view against the E. T. Adventure Ride at Universal. I went for the first time this year and E. T. Was my favorite ride at Studios park. The ride is unique in the fact that it's a classic, multigenerational attraction that uses animatronics instead of 3D screens. The movie E. T. is my favorite Spielberg film because of it's solid message and extraordinary character development. I think E. T. is one of the strongest rides at Universal Studios Park because it's the only remaining opening day attraction. People are already upset about the removal of other classic rides like Kongfrontation, Back to the Future, Jaws, and Earthquake. Therefore removing E.T. would be a huge mistake. I can't believe how this article accused E. T. of being the weakest link in the park because it's one of the best and if you need new subject matter of what is the weakest link in the park how about you hate on The Simpsons, Jimmy Fallon Race Through NY, or Fast and Furious for awhile. All 3 of those rides are less than impressive and from everything I've heard have much smaller fanbase than E. T. Adventure. I don't think E. T. Adventure is a weak attraction and I would be rather unhappy if they announced.its permanent closure. I think alot of other fans and parkgoers share my love for E. T. Adventure. Long live E. T. !!!

I think the attraction just needs a good refresh. Update the sound, the scenes, the animatronics give it some good love and attention. ET is a great attraction and I hope it doesn’t leave.

I believe your comment is biased even more than the one you commented on, I am 45 years old. Just went to universal for the first time in my life with my grade school children, and always wanted to ride the rides of my childhood, was very disappointed when back to future and Jaws were not there, I remember visions of the rides as a kid and couldn't wait to experience for myself. However when I rode E.T just this past month August 2022 it was the most disappointing experience ever. It was thee weakest ride there and it absolutely felt old and antiquated. Nothing about the ride was exciting.
I totally disagree with you about the Jimmy Fallon ride it was the only ride me and mu famiky rode twice, now F and F was unimpressive as well, but the Simpsons was halfway decent, my kids enjoyed it and they are not fans of the show.