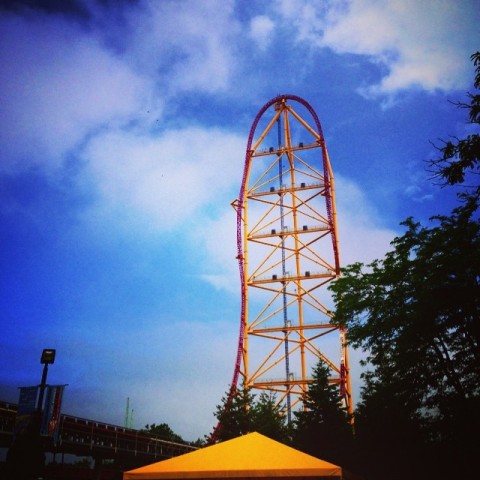 When it comes to world-renowned roller coasters, Cedar Point stands out as having some of the best of the bunch. Cedar Point is well-known for building incredible coasters that typically break records at the time of their opening. From Steel Vengeance to Millennium Force, visitors flock to Cedar Point to get a ride on many of their record-breaking coasters.

One of these record-breakers is Top Thrill Dragster. The coaster is one of the fastest in the world and has a dedicated fan base. However, the launch coaster has been plagued with mechanical issues and incidences of injured guests since its opening nearly 20 years ago. Let’s launch into the rise and fall of Top Thrill Dragster.

Top Thrill Dragster began construction in 2002 and was built by well-known coaster manufacturer, Intamin. The 420 ft tall coaster cost $25 million dollars to build and would boast the records of the fastest and tallest roller coaster at its time of opening. Those records have been taken by King Da Ka for tallest coaster and Formula Rossa for the fastest coaster at 149 mph.

Cedar Point now calls it the original strata coaster. The hydraulic launch would send riders from 0 to 120 miles per hour in 3.8 seconds. Top Thrill Dragster opened in 2003 with excellent dragster race theming, the tagline “Race for the Sky,” and a theme song that is sure to get riders waiting in the queue pumped for the ride ahead. Anytime I hear “Ready to Go” by Republica, it takes me back to standing in line for Top Thrill Dragster. The coaster also features rumbling dragster engine noises while you sit and wait to launch.

The coaster even features the typical light tower that goes from yellow to green signaling riders that they are off. The trains travel straight up the 420 ft top hat hill and barely coasts over the top before plummeting down to the ground vertically through a 270-degree heartline roll. Riders then reach the finish line and smoothly break before reaching the unloading area. It is a short but intense coaster, and I have experienced nothing like the first row on Top Thrill Dragster. On a clear day, you can even see Canada from the top of Top Thrill Dragster’s hill, if you know where to look before you quickly head back to earth.

The revolutionary hydraulic launch system was the first of its kind. The coaster features a launch system that actually pulls the trains and essentially catapults them up the hill. This system, however, can be very temperamental. Even the slightest change in wind, temperature, or precipitation can affect it. When this happens, the trains will not make it over the hill and result in a fallback, where the train falls backward and returns to the station.

These fallbacks are relatively common with Top Thrill Dragster, and I have seen a few during my time at Cedar Point. During the first couple of seasons that Top Thrill Dragster was open, it experienced ample downtime due to issues with the hydraulic system. The technology for the ride is actually very complex and includes hundreds of sensors. If even one of these sensors detects a malfunction the ride will likely be closed. While closures are not as common as the earlier seasons, the ride is still very undependable. Even on my last trip in 2019, Top Thrill Dragster was closed almost the entire day.

And, Top Thrill Dragster has certainly had its fair share of incidents...

It's been dependable since around 2017. Just because it was down day when you were there doesn't make it not dependable. I've been there when Raptor or Gatekeeper or every other ride has been down the whole day.

I would go 20-30 times a year from when TTD came out until the early 2020s. It became as reliable as the rest after 2-3 years of working out what issues it had and then fixing them.

Please don't talk about things which you don't fully know. And if you don't, go to the sources.