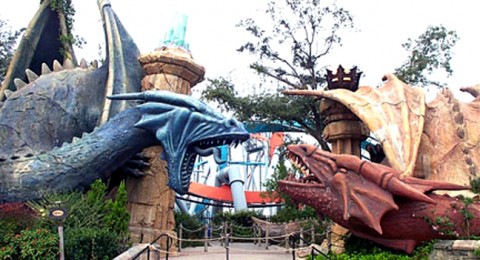 When Islands of Adventure first opened in the Universal Orlando Resort, things looked much different than they do today. Before the massive Wizarding World expansion brought Hogwarts to life in Orlando, the Lost Continent was a much larger area that saw up close and personal encounters with mythical creatures such as unicorns and dragons. The main draw of the Lost Continent area was a large steel coaster called Dueling Dragons. Riders would enter the queue, decorated with skeletons and a ruined castle, choose one of two dragons--ice or fire--and board the side of their champion. Both 'dragons' would begin their route at the same time and pass each other closely several times, giving the illusion of dueling.

The battle of the dragons would take the riders up a large lift hill, through a loop, and around corkscrew during its ride time, and was met with relatively positive reception. When the Lost Continent was reduced in size to welcome Hogsmeade and Hogwarts to the Islands, Dueling Dragons was rethemed to fit the rest of the Wizarding World. The coaster itself was redesigned to fit the theming of the Goblet of Fire's Triwizard Tournament and was renamed to Dragon Challenge. Instead of choosing the path of ice or fire, riders now had the opportunity to choose between the Hungarian Horntail and Chinese Fireball.

Shortly after the retheming and reopening of the coaster in 2011, the coasters saw two separate injuries resulting from unsecured objects held by riders. When the coasters entered some of the near-miss portions of the ride, these objects struck opposite riders, resulting in one rider permanently losing vision in one eye. The issues were promptly addressed by Universal who announced soon after that the coasters would no longer be launched simultaneously, and the dragons would no longer duel. The ride saw a drop in attendance after the removal of the near-misses, and many guests began to comment on how the coaster’s red and blue track did not quite fit the theme of the rest of the land.

In the summer of 2017, Universal announced plans to create a new Harry Potter themed coaster to replace Dragon Challenge, and by early fall the coaster began to be demolished. In 2019, the replacement coaster was finished and opened to the public.

Now, where the dragons once stood is a new brilliantly themed attraction that fits the Wizarding World much better than its predecessor–Hagrid’s Magical Creatures Motorbike Adventure. Since the Motorbike’s opening, guest reception has been through the roof with few complaints.

Although Dragon Challenge will be missed by theme park veterans and thrill seekers everywhere, it lives on in fond memories as one of Islands of Adventure’s first coasters. For those with a keen eye, references to Dueling Dragons still exist in Hagrid’s queue. Upon entering the building for the first time, take a peek along the walls decorated with paintings of magical creatures and you may just see the faded emblem of Hogwarts’ dueling club, surrounded by a blue and red dragon facing off–reminiscent of the ones who once stood guard by the gates.

Do you miss Dragon Challenge? Let us know your thoughts by leaving us a comment below or on our Facebook page.

Visited Orlando for WrestleMania 33 at Camping World Stadium in 2017 but we also visited both Universal parks as well. I had no idea DD was there before Hogsmeade was added but I felt like it fit in with the rest of the theme. At that time, I felt like it was the best ride at Islands of Adventure (aside from Hulk). Not sure if it was just me but one dragon seemed more intense than the other, I think the red one felt faster and more fun. I was sad to hear they got taken down a year or two after that.

DD will forever be one of the greatest coasters built in both theming, intensity and just plain fun. Best B&M invert IMO. It used to be the best ride in IOA. Just watching them duel was fun. Take that away and it’s not the same. Hagrids is an excellent replacement. I can’t see a better coaster to substitute the beloved DD.

I had a two park annual pass back in the day and dueling dragons was such an awesome ride! Always a good time off how the operators used to nudge one of the coasters while going up. After many years of having a pass and watching the crowds grow, had to call it quits when my daughter came along.

While I haven't been to Universal Studios since probably 2009 or 2010, when the beginning stages of Wizarding World were starting to take place with large barriers around The Lost Continent. I will fondly remember the Dueling Dragons ride. My brother, dad and I would get to the park early and sprint to the back of the park just to ride these dragons over and over again before a line would form. The near 3 or 4 Gs you'd feel on some of those steep pulls were something to write home about. It makes me sad that things have to change but, man, I sure am glad we wore those coasters OUT every year we went. Excited for a chance to finally return to see what they've done in its place. Thanks for the article!

Really? You're writing about a roller coaster that's no longer around? You do know there is a new theme park being built? Lol