Priced Out of Disney? Consider These 6 Incredible Destination Parks Worth a Visit! 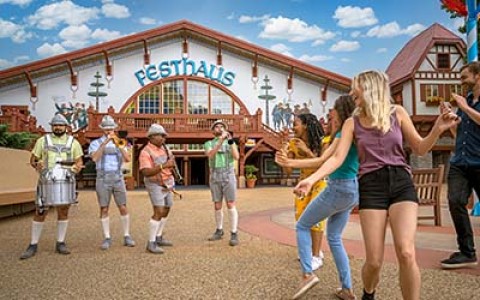 In case you haven't bothered budgeting out a Walt Disney World vacation in the last couple of years, let us catch you up: it's expensive. Seriously, it costs a lot to visit a Disney or Universal park, and the trend of rising ticket prices doesn't appear to be anywhere near plateauing. Then there's flights, hotels, ground transportation, and a host of cancelled perks and new upcharges, not the least of which being "optional-but-necessary" paid-for line-skipping, and nickel-and-diming left and right...

But here's the good news. Disney and Universal? They're filet mignon. They're the five-dollar-signs-on-Yelp restaurant. Despite what tradition may tell you, most people on Earth never enter a Disney or Universal theme park, and of the relatively few who do, most reserve such pricey trips for special occassions. And just as the "finest" hotels also give you the fewest perks for free, you'd be right to start sniffing out some alternatives that give you more bang for your buck.

Though the parks we've collected today aren't necessarily on the level of Disney and Universal's immersion, budgets, IP, or theming, these aren't your local, coaster-straddled Six Flags; they're genuine destinations in their own right. These are one-of-a-kind, delightful, must-see destinations for any theme park fan... So start adding to your bucket list, and you just may be surprised what wonders await outside the Disney bubble. Have you been to any of these parks? Are they worth a swap from Disney?

Just about everyone on the planet loves Dolly Parton, and it appears to be mutual. The wise-cracking, self-parodying, love-spreading "Queen of Country Music" has had a career spanning six decades and nearly 50 solo studio albums. The songwriter of such timeless hits as "Jolene," "9 to 5," "Coat of Many Colors," "My Tennessee Mountain Home," and "I Will Always Love You," Parton traces her roots to the small town of Sevierville in the foothills of the Great Smoky Mountains of Tennessee. And that's where you'll find Dollywood – a rustic tribue to the people, songs, and stories of the region.

Actually, Dollywood got its start without Dolly's involvement, and the park is jointly owned and operated by Herscend Family Entertainment (owners of Silver Dollar City and Kentucky Kingdom). But since Parton got involved in the mid-'80s, the park has become a sort of Mecca for her fans from all walks of life while also transforming nearby Pigeon Forge into a tourist metropolis employing tens of thousands of locals.

Quite literally tucked into the misty, forested valleys of the Smokies, you can't really see much trace of Dollywood, even when you're parking in its parking lot (which is itself a winding, narrow lot set down in a meandering valley). Through the years, more and more land has been added to the park as new paths have been forged through wild terrain. The climbs can be tedious, but for most, the park's beautiful, barely-touched environment is worth it.

It's hard to describe Dollywood. On one hand, the park is packed with live entertainment – from country to gospel to pop music of the '60s – with Parton's own cousins and nieces and nephews performing daily. It's also home to the "Chasing Rainbows" museum that chronicles the singer's career, a walkthrough of her tour bus, and a to-scale recreation of the real "Tennessee Mountain Home" two-room cabin in which she and her 11 siblings were raised. The park's Craftsmen Valley area is dedicated to the real people and real trades of the region, with blacksmiths, glassblowers, candlemakers, woodworkers, and more, all practicing their crafts with guests. That's also where you'll find the park's incredible, iconic Cinnamon Bread, made fresh at the old Grist Mill and served with made-in-park apple butter.

On the other hand, Dollywood has become a coaster enthusiast's must-visit, too. The park offers 9 custom coasters, including the unique dark ride / Gerstlauer Eurofighter hybrid Mystery Mine; the mountaintop B&M wing coaster Wild Eagle (above); the launched, highly-themed family favorite Firechaser Express, and the "bucket list" coaster that enthusiasts around the globe aspire to ride...

...the stunning Lightning Rod – the world's first true hybrid coaster, mixing wood and steel track as it launches uphill and bounds through the Tennessee terrain. The intense and unforgettable ride is certainly among the world's best. And really, who but Dolly could bring together both fans of RMC's deluxe thrill coasters and gospel music in one place?

If you're looking to turn Dollywood into a vacation, it's easy to do. Pigeon Forge includes countless hotels, restaurants, and resorts. Like Orlando's International Drive, it's also packed with wax museums, exhibits, entertainment centers, alpine coasters, and dinner theaters (including three from Dolly herself – Pirates Dinner Adventure, Dolly's Stampede, and Hatfields & McCoys Dinner Feud). And for those with the budget, Dolly's own DreamMore Resort and the new HeartSong Lodge offer premium rooms and in-park perks.

Point is, if you're looking to pivot your Disney trip to a less-pricy, but still-memorable experience, put Dollywood on your list. And that's not all!

Due to its proximity to Walt Disney World, most coaster fans are at least aware of Busch Gardens Tampa – the clear "thrill park" of Florida's lineup. (And if you haven't been to the park but frequent Florida, Busch Gardens is definitely worth a daytrip's drive. Stylized as a tribute to Africa, the park includes not only an exotic animal collection to rival Animal Kingdom, but a host of world-class coasters like Kumba, Tigris, Montu, Gwazi, and SheiKra, all set beautifully among well-decorated lands.)

But we'd be remiss if we didn't highlight its absolutely incredible sister park – Busch Gardens Williamsburg in Virginia. Set in the dense forests of the Tidewater region, this park (which, like Tampa's, is also attached to an Anheuser-Busch brewery) celebrates the "Old Countries" of Europe with "hamlets" recreating stylized town squares in England, Scotland, Ireland, France, Colonial Canada, Germany, and Italy. Busch Gardens Williamsburg really is a garden, having been named the "World's Most Beautiful Theme Park" by the National Amusement Park Historical Association for 28 years running. Traversing the park includes steep climbs and bridges, with the park's coasters convening along the Rhine River Valley.

Speaking of which, Busch Gardens Williamsburg is perhaps the textbook example of a "quality over quantity" coaster collection. The park houses 8 "adult" coasters, but each is among the best of its model thanks in part to the park's terrain, and in part to being integrated into the environment.

For example, the B&M dive coaster Griffon in France is neither the tallest nor fastest of its type anymore, but it's arguably still the best as it dives and twists through the vineyards of a French town with its 10-across trains splashing down in a pond; Alpengeist is a B&M invert with custom "ski lift" supports, charging through snowy canyons and chalets. Invadr is a GCI woodie set in the hills of New France. And Verbolten is a custom launched family coaster that sends guests hurtling through the secrets of Germany's Black Forest.

The park's newest addition, Pantheon, is an Intamin creation that sends guests accelerating forward and backwards through tilted airtime hills, inverted stalls, and a 178 foot plunge to the Rhine River. We even used it as the perfect jumping off point for discussing what we call the New Coaster Wars – an era not of bigger, taller, and faster, but of personalized, personality-filled, custom coasters that are spreading across the industry.

As you'd probably expect from a park themed to Europe, food and entertainment also top the bill. The incredible "Celtic Fyre" in the old Abbey Stone Theater in Ireland is routinely ranked among the best theme park shows on Earth. In Germany, guests can enjoy authentic bratwurst and sauerkraut while enjoying Oktoberfest dancing in the communal Festhaus, or dine on fresh-baked pretzels and beer while watching sheep "mow" the grass beneath Verbolten's river dive.

Then there's Howl-o-Scream, Christmas Town, the Food & Wine Festival... Every season, something new to discover. Basically, Busch Gardens is just a perfect example of that kind of "in-between" park – one that serves as a perfect step between regional, seasonal amusement parks and the year-round destinations like Disney and Universal. For park fans, there's something wonderful to be seen and learned in Williamsburg...