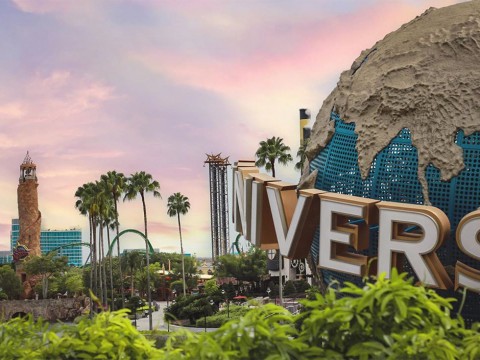 Now more than ever, theme park fans are turning to Universal Orlando to get their Florida theme park fix. These parks make for the perfect addition to a trip to the magic, but can also be a great alternative if you’re looking to try something new, as they offer the same world-class entertainment and endless thrills as the Walt Disney World parks, with just a sprinkle of your favorite films thrown in.

If you’re new to the Universal theme parks, knowing which attractions to head for can be tricky. While Universal Studios and Islands of Adventure boast a variety of innovative and unique attractions that are sure to turn even the biggest Disney fan’s head, there is also a considerable amount of overlap when it comes to the other attractions you’ll find in both the Disney and Universal parks. With this in mind, here are a six suggestions for which attractions you may enjoy most in Universal, based off of their closest Walt Disney World counterpart.

Blasters? Check. Spinning? Check. Aliens? Check (albeit a lot less cute). If you’ve maxxed out your score one too many times and fancy a new challenge, Men in Black: Alien Attack features an incredibly similar format to that of Space Ranger Spin and even boasts its own super-fun queue that welcomes you right into MIB headquarters! Rather than taking down Zurg, this time you’ll find yourself on the streets of New York as you attempt to secure your new title of ‘Galaxy Defender.’

Theming wise, these two coasters couldn’t be anymore different - picture less road signs and famous rock stars and instead try a terrifying ancient Egyptian curse and Hollywood’s own Brendan Fraser. Regardless, if you’re looking for an indoor dark coaster that's reminiscent of Hollywood Studios’ classic attraction, Revenge of the Mummy gives you that while also amping up the fear factor. Get ready for a tension-filled and turbulent experience, as well as a whole host of mummified-thrills as you attempt to escape from Imhotep’s clutches.

River rapids rides are a true theme park staple, but Bilge-Rat Barges is more like the whimsical, colorful and hilarious sibling. Both Disney and Universal’s iterations of this classic ride format boast their own unique experience, however, Bilge-Rat’s ride duration is slightly longer, meaning a considerably higher number of opportunities to get hit by that ice-cold water. While Kali warns you that “You will get wet, you may get soaked” Bilge-Rat Barges offers you no such lottery, nine times out of ten you will leave this ride DRENCHED.

Tower of Terror is beloved for its eerie theming, but if you enjoy riding it for the heart-stopping drops, Doom's Fear Fall is Universal’s answer. Rather than a series of free-falling drops, Doom’s Fear Fall shoots you straight up first, before you free-fall down, still, however, giving you that same stomach-turning sensation. The two drop towers of Fear Fall are also part of Universal’s iconic skyline so given their height, you’re able to get a fantastic (but very brief) view of Orlando all around you as you shoot into the sky - that is, if you’re not too busy screaming!

Just like Splash Mountain, Dudley Do-Rights is a playful take on the classic log-flume attraction with its colorful scenery and increasingly menacing approach to a lengthy drop. Where Do-Rights differs from Splash the most is within its seating arrangements, as Universal’s attraction sees you ride in a canoe-like formation, and much like its Toon Lagoon neighbor, Bilge-Rats, this ride provides little-to-no chance of remaining dry. You may not be headed to The Laughing Place now, but you’ll certainly struggle to keep a straight face as you plummet down Do-Rights’ giggle-inducing 75ft drop. (P.S Jurassic Park River Adventure also shares some similarities with Splash Mountain, so if Do-Right’s leaves you wanting more, you can simply hop over and experience River Adventure in all of its Dino-filled glory.)

When you’re ready to take the weight off your feet and enjoy a spot of air-conditioning, you can head on over to Universal Studios’ very own stunt spectacular! While Indy uses a number of practical production effects, Bourne Stuntacular uses state-of-the-art technology to transport you right into the heart of the Bourne franchise. And while you may be thinking ‘Screens?! Why did it have to be screens?!’ Bourne certainly doesn’t just rely on these alone, as it also mixes in a variety of real-life elements to create one mind-blowing spectacle that is sure to entertain your entire party.