As anyone who’s so much as glanced at our Lost Legends collection of in-depth attraction stories will tell you, big, beloved, and historic things close at Disney Parks all the time. In the last decade alone, Disney fans have bid farewell to rides ranging from Hollywood Studios’ Backstage Studio Tour to California Adventure’s Twilight Zone Tower of Terror; The Great Movie Ride to Universe of Energy; Maelstrom to Snow White’s Scary Adventures; our friends at Park Lore have even traced how fans have said goodbye to the Main Street Electrical Parade a half-dozen times times!

As heartbreaking as each recent closure of a classic can feel, they all have something in common: they disappear to be replaced with something new.

That wasn’t necessarily the case at Disney Parks in the late ’90s, when an era of cost-cutting saw lots of “temporary” closures turn permanent – from the abandoned aerial highways of Disneyland’s PeopleMover still threading through the park’s Tomorrowland to the “temporary” closure of Magic Kingdom’s 20,000 Leagues. Like them both, after River Country’s “temporary” 2001 closure became permanent in 2005, the strangest thing happened: nothing.

For the better part of two decades, it didn’t take much effort to get a glimpse of the remains of River Country. Any boat ride from Fort Wilderness to Magic Kingdom would glide past its waterside rocks and trestle-slides, silent, and the old Cypress Point Nature Trail boardwalk, rotting and falling into Bay Lake. Visitors to the fabled Hoop-de-Doo Musical Revue could peak through the makeshift fence outside, warding guests away from the closed park.

And of course, “urban explorers” managed to find entrypoints, necessitating Disney’s spokesperson to advise, “While we appreciate the enthusiasm of our fans, undeveloped areas of Walt Disney World are off limits to guests. As a private property owner, we have the right to trespass guests who deliberately enter unauthorized areas.”

That didn’t stop everyone. Rollins College professor and Disney historian Dr. Rick Foglesong said it best: “What fun for a kid to have a Huckleberry Finn experience and sneak into River Country.” In a 2012 account, user “Oswald” posted a must-read photo report and walkthrough of the by-then-abandoned River Country to RetroWDW.

What they discovered is a breathtaking study in how quickly nature can reclaim that which human’s build… and of Disney’s total abandonment of this six acre plot of Fort Wilderness. Bay Cove by then had essentially become an extension of the larger Bay Lake. Without refreshed lake water pumped up through the mountain and down its slides, its sandy-bottomed basin had become a stagnant pool of moss, still with rope swings and rafts and buoys throughout.

Bridges were rotted; rockwork stained by a decade of rain and sun and animal life; slides encased in moss and vines; sand beaches overtaken by scrubby grasses; structures crumbling; signs washed out; plants overgrown. For all it purported to recreate a “natural” swimming hole, the man-made River Country was a world away from nature’s version.

The park’s chlorinated pool – into which guests on Slippery Rock Falls plunged – had, of course, become as dark as Bay Cove, filled with rain water and plant life after decades of neglect, sawgrass growing through its concrete basin.

“Oswald’s” visit suggests that River Country couldn’t have been rehabilitated even if Disney had tried; a decade of abandonment had been enough to return to the park to nature, its water, wood, and rock now serving as homes for birds, fish, reptiles…

… and, oddly, chickens. (Actually, the caged chickens kept at River Country were not free-roaming birds who’d found a quiet home, but residents of the nearby Tri-Circle-D Ranch; so-called “Sentinel chickens” are part of mosquito-mitigation efforts. Chickens do not become sick from or spread mosquito-borne illnesses, but do develop measurable antibodies to them. If, for example, antibodies to West Nile Virus or Eastern Equine Encephalitis show up in sentinel chickens’ blood tests, mosquito control can act to combat the insects.)

It’s difficult to imagine any other Disney theme or water park enduring such a fate as River Country – simply walled off and left to rot. Yet for two decades, it did… A real piece of the “Vacation Kingdom of the World” – of the good ol’ days – abandoned in plain sight. 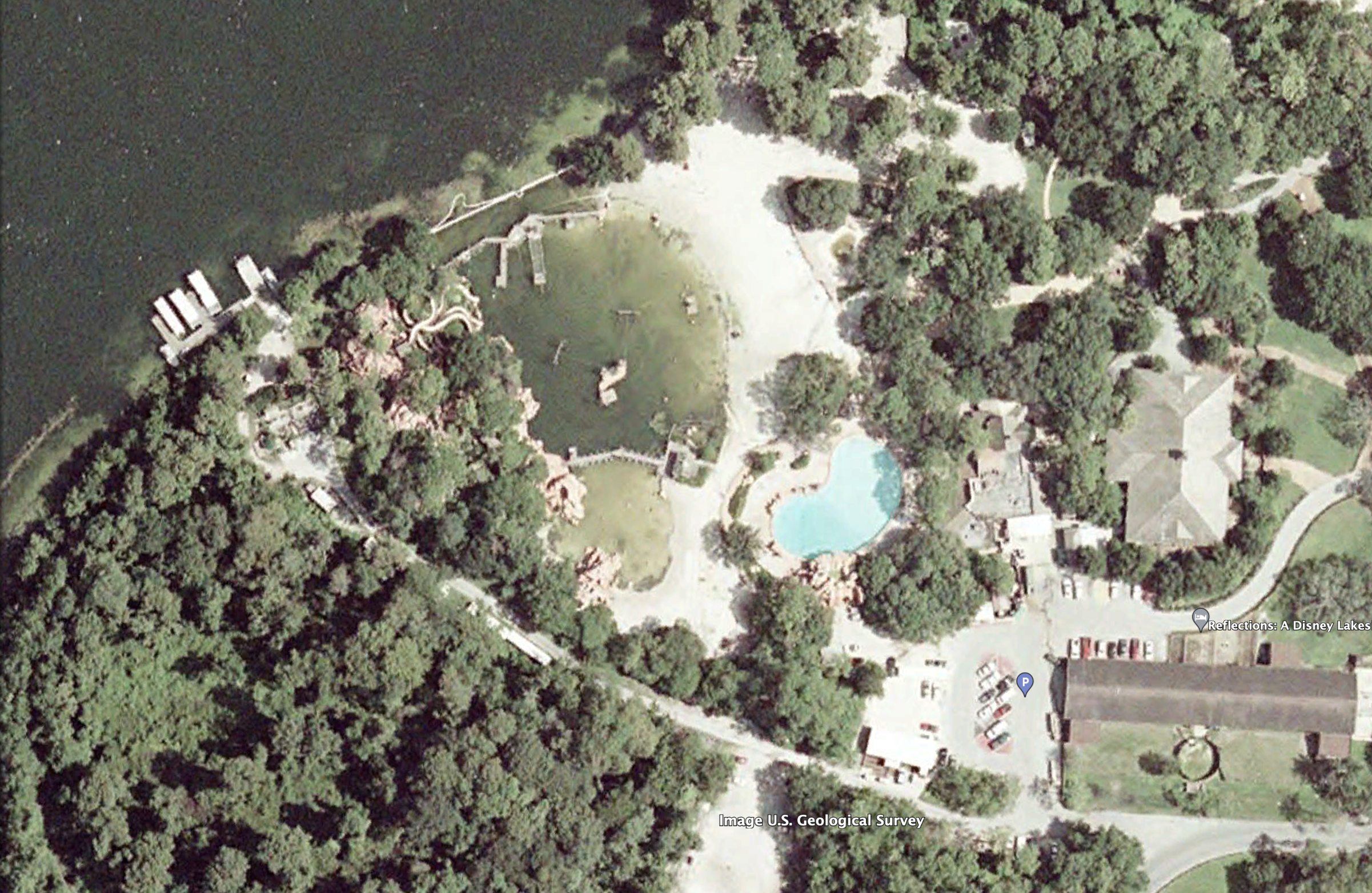 In a 2011 interview with Disney and More, Imagineer Pat Burke – who’d created the initial topographical model of the park nearly four decades earlier – said, “I’m sorry to see River Country in its present condition and hope that something good comes of it.” Well…

Despite the closure of River Country and the gravitational shift to Walt Disney World’s scale since the ’70s, there was never any doubt that real estate along Seven Seas Lagoon and Bay Lake was still among the resort’s most prime. And today, prime real estate at Walt Disney World calls for – you guessed it – Disney Vacation Club timeshare inventory.

Actually, nearly all of Disney’s Deluxe resorts in Central Florida have converted or constructed inventory to the Parks, Experiences, and Products division’s timeshare business.

In 2010, Internet discussion boards were alight with rumors that engineers had been spotted scoping out River Country’s remains, allegedly with intention of bulldozing the park and constructing a DVC resort. Insiders reported that the planned timeshare complex would likely borrow from ’90s plans for a Wild West-themed “Fort Wilderness Junction” resort and entertainment center once planned to be River Country’s neighbor (above, but cancelled, like so many other projects in the era, due to the 1992 financial collapse of Disneyland Paris). If that had been the plan, it, too, was abandoned. And River Country remained.

All the while, guests (most unknowingly) passed through the park’s entrance gates en route to Fort Wilderness’ “Mickey’s Backyard BBQ Dinner Show,” secretly held in the park’s former cookout picnic pavilion; they used River Country’s changing rooms (with showers sealed off) as the restrooms outside of “Hoop-de-Doo.” And they passed right around those rocks, meticulously sculpted by Imagineers four decades earlier.

Reflections – A Disney Lakeside Lodge would be stylized as a “celebration of Walt Disney’s lifelong love and respect for nature,” drawing from natural color palettes and textures. Inside, the hotel would lean into a wood, glass, and steel aesthetic (that is, ubiquitously modern… Gone are the days of transportational and immersive hotels like Disney’s Wilderness Lodge.)

Concept art suggested that Reflections would be built around a glass-enclosed atrium providing views out onto Bay Lake and across to Discovery Island, with rooms and restaurants drawing inspiration from films set in American nature, like Pocahontas and The Fox and the Hound (nevermind that neither really fit with the aesthetic, and certainly neither made much sense wedged between Fort Wilderness and Wilderness Lodge.)

Only the promise of DVC cash flow could release the funds to finally remove the ruins of River Country. Land clearing began in spring 2019 as demolition equipment rolled into Disney’s first water park. Within months, it was gone – a giant construction zone looming behind Pioneer Hall. As for Reflections? Well…

One global crisis sparked the opening of River Country. Another caused its closure. And in 2020, a third avenged its demolition.

Though the six acre River Country parcel was cleared and ready for the construction of Reflections, the 2020 pandemic obliterated the tourism industry and saw every single Disney Park on Earth close its gates from anywhere between three months and more than a year. In August 2020, aerial footage revealed that the Reflections space had been seeded for grass rather than graded for construction.

Soon after, fans noticed that any mention of the hotel had been scrubbed from Disney’s website, blogs, social media, or archives of the 2019 D23 Expo. To date, Disney hasn’t mentioned Reflections since, all but assuring it’s off the docket for good.

It’s likely that DVC towers announced in 2022 for the Polynesian Village Resort (above) will serve as Reflections’ spiritual rebirth, restoring its promised DVC capacity to the market. (Though Imagineering fans roundly criticized Reflections’ generic, modern, interchangeable design aethetic, it turned out to have a benefit: it apparently took almost no editing to change the design from a lakeside American lodge to a Polynesian island longhouse!)

With its mathematically-optimized pathways and gargantuan infrastructure, so very little about Disney World was naive; inexperienced; invented on-the-fly. But River Country was. A rare remnant of those early years of Walt Disney World, it really was a good, ol’ fashioned “swimmin’ hole” for generations; a “kersplashingest, kid-laughingest, slippery-slidingest, raft-ridingest, rope-swingingest, swan-divingest, summer-swimmingest, sun-snoozingest, picnickingest” getaway that’s carved into the memories of hundreds of thousands of guests spread across its 25-year life.

When we look back on River Country today, it isn’t necessarily with the longing that goes with so many Lost Legends. It’s not that Walt Disney World today would be stronger if River Country were still around… Maybe instead, it’s that we’d love to spend a day at the Walt Disney World that needed River Country; a resort that really was a laid-back “Vacation Kingdom” making up the rules as it went, and where sunbathing, sailing, dinner shows, hiking, swimming, and sliding were full-day attractions in their own right.

Put simply, the Mouseketeers got it right when they sang: