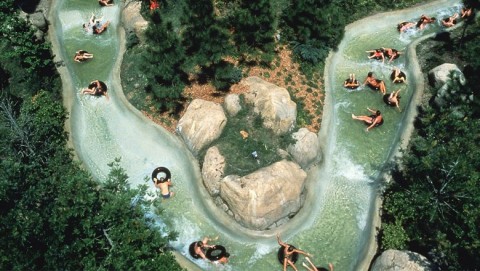 Believe it or not, there was a Disney World before Lightning Lane. Before Genie+. Before FastPass, or Advanced Dining Reservations, or Park Hopping, or Animal Kingdom, or the Disney-MGM Studios, or EPCOT. Disney World existed without apps, or Wifi, or Mobile Orders, or Boarding Groups. In an era of increasing connectively and complexity, it’s almost difficult to imagine…

But long, long ago, Walt Disney World was a leisure resort; a destination defined not by pre-planning, lost perks and new upcharges, and connecting with The Walt Disney Company’s stories, characters, and franchises, but by sunbathing! Sailing! Biking! Picnicking! Golfing! Year after year, glimpses of that simpler time are harder and harder to find… Like dreamy visions, original remnants of the Disney World of the 1970s fade out of existence, unremembered.

Shuttered decades ago and abandoned in plain sight until its recent demolition, Disney’s first water park is a treasure trove of memories; a good, ole fashioned swimming hole that served as a bayside playground for generations… So if you’re ready to dive into the history of Disney’s abandoned-and-erased water park, “bring a swimsuit and a smile. You’re likely to wear both out… at River Country.”

It’s probably appropriate that any history of River Country begins with the journey of water. After all, the story of Walt Disney World’s earliest years really is the story of the resort’s relationship with water. Construction officially kicked off on “The Florida Project” in October 1965. But the first thing engineers started building wasn’t a castle. It was a lake.

When Disney’s team of engineers arrived in Central Florida in the mid-’60s, they quickly learned the power of water in shaping the state. In many places in Florida, a shovel of displaced soil will refill with water as quickly as it was excavated. The state’s low elevation and high water table meant that Disney’s land southwest of Orlando was practically a marsh. To make matters worse, the region’s seasonal habit of dropping torrents of water via near-daily thunderstorms meant that water needed somewhere to go.

Having met Walt at the 1964-65 New York World’s Fair, it was U.S. Army General Joe Potter who was recruited for the task of taming the area that would become Walt Disney World. Having once served as Eisenhower’s appointed governor of the Panama Canal Zone, Potter had actually retired in 1960… but Walt’s plans for Florida were enough to bring him back to work. Potter was, by all accounts, an engineering genius, and much of the resort’s infrastructure still relies on Potter’s master-planning that linked underground utilities, water treatment plants, power plants, and 55 miles of drainage canals, reservoirs, and levees – all of which were marvels of modern engineering for their time.

Without a doubt, Potter’s biggest achievement by size must be the recreational centerpiece of the entire resort: Bay Lake (a natural, mile-wide lake predating Disney’s arrival) and its man-made extension, the Seven Seas Lagoon (the first thing “built” as part of the Florida Project). (Today, one of the ferries that carries guests across the water to Magic Kingdom is named the General Joe Potter in his honor.)

Though development around the property in the 50 years since has been vastly spread from the concentrated 1971 core, there’s no question that in the ’70s, Bay Lake and the Seven Seas Lagoon were the architectural and programmatic centerpiece of the “Vacation Kingdom of the World.” Disney’s early survey work had asked Americans what they expected when they envisioned a vacation to Florida, with “white sand beaches” ranking among the top of the results. So Disney’s Seven Seas Lagoon and Bay Lake would give guests what they wanted: a place to fish, sail, tank, swim, camp, and eventually, slide…

The Expanding and Contracting World

Those early years after Disney World’s 1971 opening would look practically naive to new generations of fans today – a single theme park and two resort hotels (the Polynesian Village and Contemporary) around the Seven Seas Lagoon, and the Fort Wilderness campground on nearby Bay Lake. Beyond Disney’s borders, a world of what Disney considered “supporting” businesses emerged. Just as hoteliers had gobbled up property along Harbor Blvd. in Anaheim, businesses feverishly bought up real estate around Central Florida, ushering in an era of new motels, businesses, and attractions.

Though it’s hard to imagine today, Disney’s perspective at the time was that such businesses were “good neighbors,” bolstering the overall attractiveness of the region, increasing Central Florida’s tourism capacity, and serving as “supporting” side shows for a visit to Walt Disney World. So of course, in those initial years as crowds turned up in droves to the new Walt Disney World, Disney began working on plans to expand its property’s attractions and capacity…

But when the United States supported Israel in the Yom Kippur War of 1973, opposing Middle Eastern countries – including Saudi Arabia – initiated an oil embargo on the U.S., which caused the price of crude oil triple. President Richard Nixon rushed to ration gasoline, but across the country, fuel prices soared and cars lined up for miles around gas stations. As a result, tourism across the Western world collapsed, Disney’s stock price was cut in half, attendance at Magic Kingdom crashed, and just two years into its existence, Walt Disney World’s plans for expansion were cancelled.

After six months, the oil embargo was lifted in March 1974. But the fight to convince guests to return to Central Florida was just beginning. With demand low and its “good neighbor” hotels struggling, it wouldn’t make sense for Disney to jump back into production on planned lakefront hotels like the Asian Resort, the Venitian Resort, or the Persian Resort. Instead, they’d focus their rebound on an area of the resort much less likely to compete with local businesses, and much more likely to draw locals… a water park.