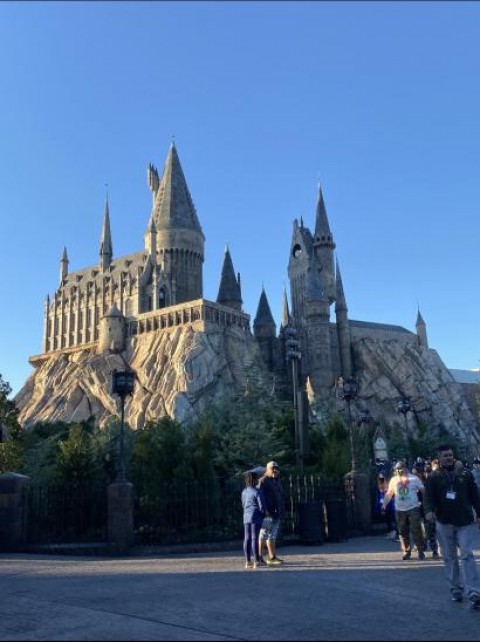 The Wizarding World of Harry Potter has become a staple in Universal theme parks since its opening in 2010. Visitors from across the globe come to experience the immersive land for themselves, enjoying some cold (or hot or frozen) butterbeer, participating in the wand choosing ceremony, or catching a ride on the famous Hogwarts Express, a convenient method of park hopping from Universal Studios Florida to Universal's Islands of Adventure and vice versa.

What many people don’t know about this iconic train, however, is its history and the story behind its creation, and the iconic piece of film history that was almost transformed to fit the Hogwarts Express’s role.

During the planning phases of the Wizarding World, J.K. Rowling visited Universal Studios to discuss plans for the area. As she was passing the area outside of Krustyland and Springfield, her attention was drawn to the iconic time train used in the third and final installment of the Back to the Future trilogy. Alongside the Delorean, the screen-used Jules Verne time train featured in the closing scene of Back to the Future III had been on public display in the park since the closure of Back to the Future: The Ride that once occupied the space currently inhabited by the Simpsons.

Rowling was informed that the park planned to overhaul the time train and utilize it as the Hogwarts Express, but she immediately intervened, stating: “No, absolutely do not do that, please do not. This is iconic. Keep it totally as it is.” Because of her intervention, this iconic piece of film history was saved from being transformed and instead, the Hogwarts Express was created from a different engine.

One of the last remnants of Back to the Future’s presence in the park still remains in place to this day for die-hard fans to appreciate, and many take for granted that this piece of film history remains in the park, not realizing how close it was to being permanently removed. Thankfully, fans will have a bit more time with the famous train, always reminding visitors that “the future is what you make it–so make it a good one!”

Would you have been sad to see this iconic train from Back to the Future III made into the Hogswart Express? Do you hope that Back to the Future returns to Universal Orlando Resort? Let us know your thoughts by leaving us a comment below or on our Facebook page.