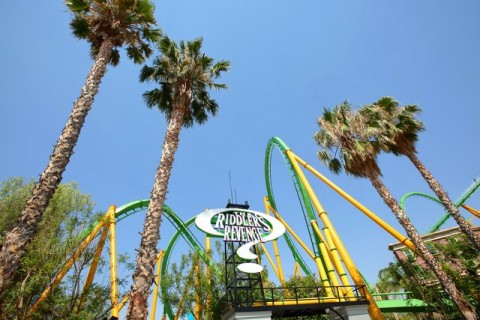 Roller coasters are arguably one of the most popular theme park attractions. They provide thrills, fun, and sensations you cannot experience on any other type of ride.

However, what happens when the coaster is more painful than enjoyable. Would you ride a coaster for its thrills even if it hurt? In this installment of WOULD YOU RIDE, we look at some roller coasters that bring just as much pain as they do thrills. Would you ride any of these four painful coasters?

Big Apple Coaster (Formerly Manhattan Express),  is an icon of the Las Vegas strip. The coaster is located at the New York, New York Hotel and Casino and was built 25 years ago by defunct coaster manufacturer TOGO. Even shortly after opening, the coaster was deemed a very rough ride due to terrible transitions and bulky over-the-shoulder restraints that would cause seemingly endless headbanging.

Some riders would even get bruises from the rough ride. Given that the coaster is a pay-per-ride attraction, it doesn’t seem like it would have been worth dropping money to go back to your hotel to sleep off a headache. However, in 2021 the coaster received newer ride vehicles that no longer include over-the-shoulder restraints and many riders believe this to be a significant improvement. Would you give this ride a second chance?

Time Warp at Canada’s Wonderland is a flying coaster, specifically the Volare model from manufacturer Zamperla. Many believe this style of roller coaster to be among the worst in the world. The coaster originally opened as Tomb Raider: The Ride. It featured special effects and theming. But the incredible theming was not enough to distract riders from the incredible pain they would experience on this coaster. The ride vehicles hold riders prone in what can only be described as a flying cage. The full-body restraints are uncomfortable when it comes to the twists and turns of the coaster, and they are also known to cause reckless headbanging.

Still, the coaster remains popular among coaster enthusiasts who desire the credit for riding this unique coaster as there are only three currently operating around the world. You can find one in Australia and another at Playland in New York. Would you be willing to overlook the pain for a ride on this unique style of coaster?

Riddler’s Revenge is a Bolliger & Mabillard stand-up coaster, and it isn’t the only one still in operation. If you have ever ridden a B&M stand-up coaster, you may have experienced quite an uncomfortable ride. Having ridden on both Iron Wolf at Six Flags Great America and Mantis at Cedar Point (RIP to both of these coasters), I can speak to the amount of discomfort the stand-up coasters can offer. If you have not had your seat locked in at a height that was a little too high or a little too low, you are among the lucky ones.

Riddler’s Revenge specifically is notorious for being an uncomfortable ride. The ride was built in 1998 and exposes riders to 4.2 G-forces. While other B&M stand-up coasters have been converted to sit-down coasters (like Mantis when it became Rougarou), Riddler’s Revenge still maintains its stand-up coaster status. However, there may be hope for these coasters yet. Recently, B&M filed a patent for a new restraint system for its stand-up coasters. This new restraint style does away with the outdated and bulky over-the-shoulder restraints and replaces them with new slimmer restraints, like what you would find on many winged coasters. Could this be the solution for this dying breed of coasters? Even with new restraints, would you ride these coasters, or rather see them converted into something new?

First is T3, but there is also Mind Eraser at Six Flags America and Kong at Six Flags Discovery Kingdom. When T3 originally opened at Six Flags Kentucky Kingdom in 1995 it was known as T2 and was the first coaster of this type to be built in the United States. The original trains featured the bulky over-the-shoulder restraints. These restraints paired with bad transitions made for a headache of a ride.

In 2015, after Kentucky Kingdom was under new management, T2 was fully refurbished with updated tracks and new trains and reopened at T3. While the new trains feature a modified over-the-shoulder restraint, the ride remains rather uncomfortable. Speaking from experience, the newer restraints can push down on your thighs and cause quite a bit of pain. Kong and Mind Eraser still feature bulky over-the-shoulder restraints. Have you ridden one of these coasters, and would you try one again?

Personally, of the coasters on this list that I have ridden, I can honestly say I would never ride them again. The thrills are not worth the pain. But, what is your opinion? What are the most painful coasters you have ridden? Let us know in a comment below or on our Facebook page!

Viper from Six Flags Magic Mountain and Desperado in Primm, Nevada should definitely be on this list. Riddler's Revenge is bad but not as bad as Viper.