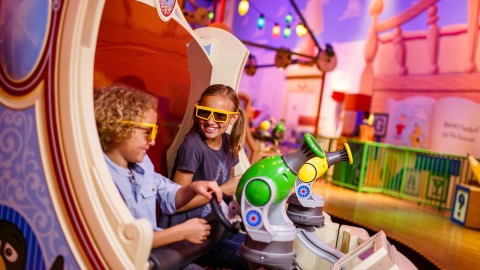 For fans of park history, there's nothing quite like seeing the story of Disney Parks play out. And for many of us, we've lived through a few very interesting changes in the parks...

Today, we've collected five rides that have made the very unusual move... of moving! Seriously, the rides below may be cemented in place, but that doesn't mean they haven't changed addresses. Did changing the context of these rides change the experience for you? Or does it even matter where they reside on paper? Let us know in the comments below!

When the Matterhorn Bobsleds opened at Disneyland in 1959, the ride wasn't just Disney's first "mountain" and the first E-Ticket; it was the first modern steel roller coaster, period. Considering that it's contained with a 147-foot tall artificial mountain, it may be suprising to hear that Disney "moved" the Matterhorn Bobsleds in 1972. But like all the rides on this list, it's true! ... Kind of.

When the ride opened (the same day as fellow O.G. E-Tickets, the Submarine Voyage and Disneyland Monorail), it was part of a massive expansion of the four-year-old Disneyland's Tomorrowland. But in the 1970s, a multi-year upgrade to the mountain saw its once-hollow interior filled in so that the bobsled track slid through icy caverns and glacial grottos instead of echoing darkness. In 1972, Matterhorn officially went from blue to pink on the park map, being "absorbed" into Fantasyland.

It was probably a smart swap. With a new mountainside Swiss chalet station and the 1977 addition of the fabled Abominable Snowman inside the peak, the Matterhorn feels like a perfect compliment to the storybook European village of Fantasyland. Having now been an official Fantasyland offering for 50 years, it's hard to believe the Matterhorn was ever a Tomorrowland ride to begin with... except that its two intertwining tracks are often called the "Fantasyland Track" and the "Tomorrowland Track" based on their proximity to each land.

Toy Story Mania can be found at three Disney Parks, and in a different land at each. Both California Adventure and Tokyo DisneySea's versions are stylized as ornate, turn-of-the-century seaside boardwalk dancehalls (as part of Pixar Pier and American Waterfront, respectively). The version at Disney's Hollywood Studios wasn't. Dropping "Midway" from the ride's name, the Florida version was placed in some vacant soundstages that had formerly been part of the park's real "studio" backlot. Red brick cladding turned the backlot into "Pixar Place," loosely based on the aesthetic of Pixar's real studio campus in Emeryville, California.

In 2018, Disney repurposed some of Hollywood Studios' long-abandoned studio complex to build Toy Story Land. Like the other three versions of the land, Florida's Toy Story Land was a "cheap and cheerful" way to quickly add family capacity to the underbuilt park. But unlike the other Toy Story Land's, Disney World's has an E-Ticket dark ride.

Toy Story Mania was absorbed into the new land in a very unusual way: by basically walling off its old entrance on Pixar Place, and building an entirely new one on the other side of the soundstage, facing Toy Story Land. Getting to the ride is easy enough since designers could just rearrange guests' flow through the existing queue. But getting out of the ride is quite a hike, with a very, very long pathway returning guests to Toy Story Land.

And that's just the beginning...