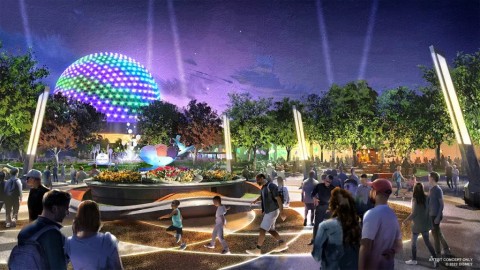 Like it or not, EPCOT had a serious problem. It didn't take long after the park opened that Walt Disney World's second gate stumbled onto an identity crisis. Sometimes derided as a bland, boring, educational endeavor – long-outdated in the neon-patterned, thrill-focused '90s – leaders needed to find a way to inject new energy, color, enthusiasm, and (most importantly) attendance into EPCOT.

Today, EPCOT is always in flux. No, not just because of a massive, multi-year, open-ended, billion-dollar reconstruction effort that's part-nostalgic, part-character-driven, but because of an expanding, rotating cast of festivals meant to transform the park into a local's hangout, continuously refreshed with new plantings, new popcorn buckets, new food offerings, new performances, and new energy.

Today, we'll explore EPCOT's five seasonal states by ranking our favorites. But be sure to tell in the comments: which of EPCOT's annual events is your favorite, and which do you think could do with a reimagining?

Over the last decade, "classic" EPCOT festivals have expanded their runs while new festivals have flickered into existence filling up vast swaths of the calendar. Nicknamed "Diet EPCOT" by fans, periods when EPCOT is not decked out for a festival are growing fewer and farther between.

Given the dates (or anticipated dates) of EPCOT's 2022 Festival seasons, your likelihood of seeing "Diet EPCOT" is extraordinarily low. Only about eight weeks of the year are unprogrammed (and honestly, those weeks are generally just 2-week buffers between each festival, so you're exceedingly unlikely to ever see the park fully "undressed" of food booths, topiaries, and temporary signage).

For some, Diet EPCOT is their preferred way to see the park, unencumbered by the layers of horticulture, food booths, and street performers that Disney's used to add vibrancy, color, and activity to a park that's generally not well known for its warmth. But increasingly, Diet EPCOT is like a hairless unicorn – exceptionally rare to see, and generally missing something that would make it nicer to look at.

The Food & Wine Festival is one of the "OGs," launched way back in 1995. (Unbelievably, in 1995 the 30 day event ran only from September 28 to October 27; this year, it's likely to run from mid-July to late November.) Given that the Food & Wine Festival is long-running and extremely EPCOT, it's probably controversial to essentially rank it last on our definitive list of the second gate's celebrations.

But let's be honest: food and wine are pretty definitively a part of every EPCOT festival (plus Diet EPCOT). The Food & Wine Festival just charges guests top dollar for "tapas" sized samplers of international fare. And the Food & Wine Festival's offerings aren't just notoriously expensive; they're notoriously uneven. With dozens of booths each offering a half-dozen items, your chances of spending $8 for three lukewarm, frozen raviolis are uncomfortably high, and eating them on a trashcan in the sweltering heat of late summer may be a rite of passage for Floridians, but it sure ain't a great time.

Sure, the Food & Wine Festival also offers some fun cooking demonstrations, wine pairings, and seminars, but nearly all are significant upcharges. Speaking of which, nearly every major theme park in the country now runs a "Food & Wine Festival" of its own. It makes sense. The food festival's focus on tiny portions and tremendous prices is a great draw for passholders and a huge revenue-generator for the park. It's not that it's a bad time; it's just that EPCOT's other festivals arguably improve on the model. For example...

The Flower & Garden Festival is actually the oldest of EPCOT's festivals, launching in 1994. It's got major late-spring, early-summer vibes, which happens to gel really well with what EPCOT needs: more color. Yes, the Flower & Garden Festival sweeps across the parks many vast, concrete expanses with wonderful landscaping and iconic topiaries, plus (emboldened by the revenue brought in by the Food & Wine Festival) lots and lots of food booths (renamed "Outdoor Kitchens" to fit the context).

The Flower & Garden Festival is lovely, and certainly one of the most beautiful times to visit the park. If there's a complaint to be had, it's that this festival probably feels the most like one that's stored in a warehouse and rolled out identically each year, with the same topiaries and garden trails and accessories. In other words, it's a nice "activation" of the park visually, but lacks something programmatically. Only the "Garden Rocks Concert Series" really offers things to do, and while that's enough to bring locals in in the evenings, it's probably not enough to inspire booking a plane ticket to Orlando.