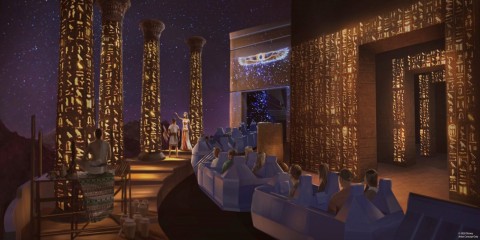 Somewhere in the multiverse, Disney Parks are debuting not just Cosmic Rewind and TRON, but a handful of brand new E-Tickets, pavilions, and attractions this year and next. Unfortunately, that universe is not ours.

In the wake of COVID-19 and the lengthy closures of Disney Parks, executives and Imagineers took a long, hard look at the projects they had pending in the parks. It's probably fair that in the trenches of 2020, many of the big-name projects planned for Disneyland and Walt Disney World were put on pause. But now, with packed parks and record profits, it's worth looking at the projects cancelled during the pandemic...

So today, we've collected four off-the-table-for-now projects that we think would've been major additions to the parks we love. Our question for you is, if you could revive one of these paused-or-cancelled projects, greenlight it, and get it open, which do you think would be the one worth saving... and which do you think are better left on the cutting room floor?

At the semi-annual D23 Expo in 2019, EPCOT was center stage. As part of a long-rumored, much-needed, open-ended, multi-year reimagining of the park, dozens of high profile projects, redesigns, and aesthetic swaps were announced, re-confirmed, or detailed. But there was probably no more divisive an announcement than a massive reimagining of the ride inside the park's iconic Spaceship Earth.

Spaceship Earth has actually undergone several relatively major redesigns in its first forty years, each bringing new scenes and new narrations by new voices. But what has not changed much is the centering philosophy of the ride. In the broader context of EPCOT Center and its Future World pavilions, Spaceship Earth was focused on the topic of "communication," exploring how humanity has evolved from cave paintings to language to the printing press to the Internet age, where communication is instantaneous and global. Aside from Living with the Land, Spaceship Earth is arguably the last truly great dark ride in the park; a last remnant of EPCOT Center's lengthy, informative era, with all the rest reduced to being Lost Legends.

That wouldn't still be case today if the ride's next reimagining went as planned. Meant to begin construction in May 2020, the new Spaceship Earth would abandon the focus on communication and instead lean into a much more IP-friendly topic: "storytelling." The ride would still follow the same physical layout and guests would still journey through time. In fact, the first quarter of the ride probably wouldn't have changed much, doubtlessly using existing scenes to tell the origin of stories from our prehistoric ancestors, the development of writing, and the great heroes of ancient myth...

But of course, the ride would eventually depart from its existing scenes to include new ones... each a convenient place to at least hint at a beloved Disney or Pixar property.

For example, concept art of a proposed new scene depicts ancient Pacific Island voyagers navigating the moonlit ocean... while telling the story of Disney's 2016 film, Moana. The new ride would also have introduced the "StoryLight," a glowing representation of creative inspiration and oral tradition flowing through the ride's scenes, representing how stories are shared across continents and seas.

Though we don't know, it's possible that the "new" Spaceship Earth" would've been just as educational and inspiring as the current version, detailing famous storytellers like Homer, William Shakespeare, the Grimm Brothers, Charles Perault, Hans Christian Andersen, J. R. R. Tolkein, Agatha Christie, W. E. B. Du Bois, Walt Disney, Dr. Seuss, Stephen King, and more. But more than likely, Imagineers would've been tasked with backwards-engineering scenes that could allude to Disney films using projection rather than Animatronics, and it's unfortunately easy to imagine the ride's climax becoming a cringey, self-aggrandizing ode to Walt as the "ultimate storyteller."

The rumored two-year closure felt like an eternity back then, but since the transformation to the "new" Spaceship Earth was meant to begin in May 2020, somewhere in the multiverse, the reimagined ride would be up and running today. It's hard to know if the "new" Spaceship Earth would be an improvement over the classic we know and love, so the question is: knowing only what we know about it, if you were in charge, would you place it back into production? As to whether this reimagining will eventually get the green light again, we'd say "probably." Spaceship Earth's ride system is in need of a major mechanical refurbishment or replacement, and when Disney undertakes that expense, the call for characters may be too great to ignore.

If it feels like the center of EPCOT's (former) Future World has been a walled-off, muddy pit for about three years, that's because it has. A major component of EPCOT's transformation was dealing with the center of the newly-designated "World Celebration," where the abandoned, parentheses-shaped buildings of Innoventions (and before that, Communicore) and hilariously-'90s shops and restaurants (like MouseGear and Electric Umbrella) added to EPCOT's dated feel.

The eastern half of Innoventions has recently emerged as the pleasantly-modern-if-simplistic Creations Shop, Connections Cafe, and Club Cool, each sporting glass-and-wood interiors that feel warm, smart, and 21st century. The western half of Innoventions was demolished, striking right at the heart of "EPCOT purists" who couldn't believe Disney would so egregiously attack the park's design principles and symmetry.

That demolished "parethesis" was meant to be replaced by two new "pavilions" – the outdoor Journey of Water, and a unique new Festival pavilion meant to provide a new home for EPCOT's ever-growing annual celebrations of Arts, Flowers & Gardens, Food & Wines, and Holidays. The "table"-shaped pavilion arguably embraced EPCOT's new design philosophy by embracing the monumental architecture of the '70s and '80s, but softening it with 21st century touches.

Operationally, it also made sense, since the pavilion was three distinct floors – a ground floor providing cover from Florida's sun and rain; a glass-enclosed floor perfect for classes, demonstrations, dining, and more; and a "tabletop" level planted with trees and park-like pathways, no doubt serving as festival space by day, and premium, up-charge, corporate-rentable Harmonious viewing by night.

As soon as cost-cutting started coming down the line, Disney Parks Blog posts referring to the "festival pavilion" were sneakily edited to instead refer to a "festival area," conjuring images of a grassy field replacing the southwest quadrant of Innoventions.

In May 2022, we finally got the updated plan. In a hilarious twist, Disney's new plan for replacing the demolished quarter of Innoventions is... to essentially rebuild the quarter of Innoventions they just finished demolishing. The new festival space (which is being called Communicore in a nonsensical nod to the past) basically amounts to an expo-style hall for rotating programming (like Wonders of Life used to be), a plaza for larger demonstrations, performances, and shows (facing Imagination), and a smaller stage for DJs, demonstrations, and formers (facing inward toward Spaceship Earth).

Though it would've been a major "mea culpa" for Imagineering, we almost wish the space actually was a direct rebuild and mirror of Innoventions since – as it is – it's clear that there's supposed to be symmetry there, but the two buildings won't match. Though, yes, there is a structure being built where the former Festival pavilion was supposed to go, several insiders have noted that this new Hall is intentionally quite easy to remove... Should Disney choose to move forward with another plan (or return to the "table" concept), this empty "flex space" hall and performance plaza could be demolished at relatively little expense. Hmmm...

In some ways, it's a shame that EPCOT's much-needed reimagining happened to fall during COVID. If there's one park that needed a massive, complete, fully-realized, fully-funded reimagining to go from sketch to reality unaltered, it was EPCOT. Instead, we've kind of ended up with more of the same kinds of cost-cut "solutions" and quick-fix pivots that have made EPCOT into the mess it is to begin with. Will the results be an incomplete, incoherent, designed-in-crisis mess instead of the all-at-once, master-planned vision we were promised? Who knows...

But it's not the only park affected by cancellations...

Chapek needs to go.. Disney is returning to the era of the mid to late 90s where it was all about money and not about the experience. Cheap quality products, attractions, and rising expenses for families. Its absurd that the execs of disney did not learn their lessons, and are repeating it again. Universal is winning the war by far, and DIsney is only getting attendance becuase its disney, but attendees are nto returning on a regular basis like they used to.. These attractions here and there are not going to fly when it 3 years Universal Opens a brand new park down the road again. Disney needs to bring original new rides, and wowing attractions to pull audience back, and begin to offer attendants something, and not just try to hoard money in every which way possible.

I wouldn’t say the Avengers E-Ticket is completely cancelled: https://www.ocregister.com/2022/03/09/disney-puts-quinjet-e-ticket-ride-on-hold-at-avengers-campus/