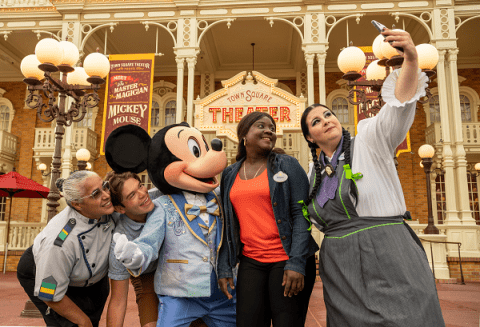 It’s been a season of change for fans of Disney parks, and not all of those changes have been well-received.

Criticism is nothing new for the Walt Disney Company—pretty much every major decision Disney has ever made has been met with some type of criticism, from renovations on It’s a Small World to the opening of Star Wars: Galaxy’s Edge.

What seems to be different this year is the level of criticism—tensions are unusually high among longtime Disney fans, and many are throwing their hands up and saying they’ve had enough. For some, the shifts have just been too much. Others feel like their families have been priced out of the Disney experience. Others are frustrated with Disney regarding political issues.

It's messy, and unlike Disney’s past rodeos with discontent, social media and an extremely vocal fanbase are playing new unexpected roles.

We’ve written about areas where fans feel Disney has missed the mark before—hot topics like the implementation of Genie+, the removal of previously free perks, and areas where guests feel like the Disney experience has lost value. As some of our readers put it, it feels a bit like Disney has started monetizing and selling off their goodwill with longtime fans… and for some, they’ve gone too far.

What can be done about it though?

What are some steps Disney could take to win back good will with fans? There are a number of simple and complex solutions that could take the company back in the right direction. A word of caution: some of these issues can be divisive, so let’s do our best to keep the discussion civil.

Here are a few ideas that come to mind…

Fans are distinctly divided in their opinions on Genie+. Some have enjoyed the system despite the added price, thanks to its ability to bring back something like the old Fastpass+ system. Others are frustrated with hiccups in its implementation, both with its limitations (which Disney has openly acknowledged) and with the ways Genie+ has actually introduced new problems that make it even worse for standby wait times and crowd congestion than Fastpass+ was.

So what can be done about it?

Disney has taken one step in the right direction already. One of our recent complaints with Genie+ is the way it can badly throw off standby wait time estimates. We experienced multiple standby queues back in February that all ended up taking 2-3 times longer than the time posted—a difference of hours in some cases.

Fortunately, it seems Disney has already made some moves to address this. The last time we visited, we noticed that queue times were much more accurate. This is a very positive step forward that we hope the company maintains for the foreseeable future.

What still needs to be addressed are the major issues with Genie+, and there aren’t many simple answers. In its current form, Genie+ fails to improve over Fastpass+ because too much ride capacity is allotted to Genie+ users (over 90%). This ends up inflating standby wait times and crowd congestion throughout the parks. For those who don’t use the system, it’s a noticeable problem that has made the Disney experience more tedious. For those using Genie+ and Individual Lightning Lanes, guests often report they aren’t getting their money’s worth because they can’t get reservations to the rides they want at convenient times.

The two possible solutions are likely to be controversial. On one hand, Disney could lower the cap for Genie+ reservations so the service doesn’t take up as much ride capacity. While this is likely to lead to more frustrations for Genie+ users, transparency on Disney’s part might be able to head this off.

The more likely approach is to raise the price of the service. This will certainly be met with even more criticism because fans are sick of upcharges. It would, however, serve the purpose of reducing the pool of people accessing Genie+, improving the issues of queue-inflation and crowd congestion.

The third option may be the necessary one: take Genie+ back to the drawing board. Look at services that have been better received, like Universal’s Express Pass, and see where improvements can be made. Either commit to making the service free like Fastpass+ was or lean into the fact it is an optional upcharge that will benefit some guests but shouldn’t feel like a necessity. It’s an understandably complex problem, but Disney could win back some goodwill if they take the necessary steps to see what fans are frustrated with and try to find innovative ways to address it.

We are admittedly surprised this one is still an issue considering how many pandemic restrictions Disney has rolled back, but park hopping remains extremely limited at Walt Disney World.

For those unfamiliar, guests used to be able to purchase a park hopper add-on to tickets that would allow guests to freely hop between Disney parks throughout a given day. To limit crowds, park hopping was eliminated during the pandemic reopening. Eventually it was reinstated as an option with the limit that guest can only park hop after 2 PM.

While some park hopping availability is better than none, many fans remain frustrated that park hopping hasn’t been restored.

The most likely reason for this seems to be that park hoppers introduce a wild-card factor for Disney. Disney has made it clear that they intend to keep the Parks Pass Reservation system for the foreseeable future. This makes sense from a company viewpoint as reservations allow Disney to cap how many guests are in each park, allowing them to plan for workers and resources accordingly. It makes sense that they would want to keep a tight leash on park hoppers, the one unknown variable that can unbalance that system.

That doesn’t change the fact that guests who purchase a park hopper are well-aware they are currently only getting half a day’s benefit, if that. If Disney wants to improve good will with these fans, something has to give.

If Disney isn’t ready to reimplement all-day park hopping, expanding park hopping hours could be a good step in the right direction. Even moving the start time back to 12 PM could be a welcome change for Passholders and guests who enjoy multi-park days.

How about adding to the park experience without extra costs?...

Three ways the experience could be improved:
1. Hire more staff and pay good staff a better wage so they will stay. Workers are what made the park fun, an escape, and clean. Treat the workers well and they will treat the customer better.
2. The price is expensive. Help people see that it is worth $10,000 for a memorable, beautiful family fun vacation. People feel ripped off right now.
3. Improve the WiFi inside the parks. Disney makes us rely on our cell phones. WiFi should be optimal to handle the connections. More FREE charging options. A cool place to sit for a fast charge with a time limit and staffed. Staff cleans and keeps the people moving.