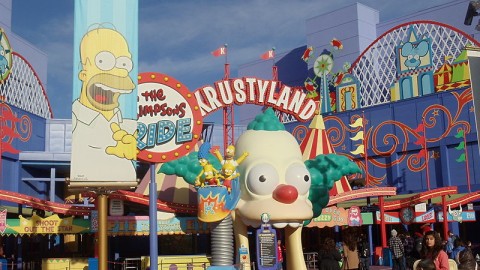 Ever since Disney purchased 21st Century Fox Company in 2019, many parkgoers have been wondering whether or not the House of Mouse intends to inherit some of the Fox properties that can currently be found at Universal Studios, whether Orlando or Hollywood.

One property in particular is The Simpsons, whose dozens of seasons you can now stream on Disney+. Yes, The Simpsons is Disney property, but what about the actual property that can be found in the form of Krusty Land, Springfield, U.S.A: Home of The Simpsons at both resorts?

The Simpsons-themed lands are of course based on the hit American animated television series of the same name, which features world-famous characters such as Homer, Marge, Bart, Maggie, Lisa, Krusty the Clown, Itchy and Scratchy (that doesn't even scratch the surface - there's a wealth of characters in the show).

At Universal Studios Orlando, Florida, you'll find The Simpsons Ride - a simulator attraction that uses dome-shaped IMAX screens - that has been built by Krusty the Clown. During the ride, you'll learn that Sideshow Bob has escaped from prison and intends to get revenge on the clown and the Simpsons themselves.

The themed land's second ride is Kang & Kodos' Twirl 'n' Hurl, which is an "Aero Top Jet" attraction, during which you must help the two iconic aliens (who are famous for appearing in several The Simpsons' Treehouse of Horror episodes) take over the town of Springfield.

The Simpsons Ride can also be enjoyed at Universal Studios Hollywood, which also shares many retail and food outlets with its Florida counterpart, such as Krusty Burger outlet, Lard Lard Donuts, Duff Gardens, Moe's Tavern, The Frying Dutchman, and a Cletus' Chicken Shack.

Other locations you'll recognize include Springfield Elementary School and the Springfield Police Department, so needless to say, the world of Springfield at Universal Studios isn't short on experiences and size. But how would the themed land fair in a Disney setting?

Let's take Walt Disney World Resort in Florida as an example, seeing as it's big enough to welcome almost any themed land from its neighboring Universal Studios! This raises many questions, from where a The Simpsons-themed land would belong within the resort, to whether or not it would even fit in in the first place?

First of all, let's address the aesthetic issue - could Springfield fit into Walt Disney World Resort, or any other Disney Park setting for that matter, from an aesthetic point of view? Well, we think the writing's on the wall with this one, because The Simpsons is a property that is absolutely bursting at the seams with color.

Color isn't necessarily the only qualifying criteria, of course, but it's plain to see that Springfield has it all, and as you already know, it certainly wouldn't be the first animated fictional universe welcomed into the world of Disney. In fact, the very foundation of Disney Park settings is the world of animation.

So, if The Simpsons does indeed qualify to be adapted into Walt Disney World from a visual standpoint, where would it be best placed within the resort? Epcot? Animal Kingdom Park? Magic Kingdom Park? Or Disney's Hollywood Studios?...

I mean the contract that was originally signed by Fox and Universal is actually up in 2023. Many people in the theme park community (myself included) believe when Disney and Universal go to the negotiating table I’m January 2023 that Disney will make them an offer of keeping Simpsons in exchange for Marvel

I say not at all. Full disclosure, I don't care for the show. I honestly wouldn't miss it if it was gone all together but it is definitely better suited for Universal.

It's Official: "Fantastic Beasts" Is NOT The Next Harry Potter. Here's What Went Wrong, and Our Ideas for Universal...