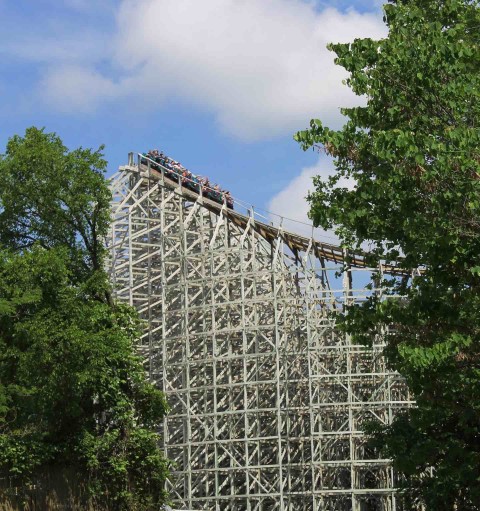 In our previous article, 5 Hybrid Roller Coasters To Add To Your Bucket List, we mentioned some of the best roller coasters in the country. The process in which most hybrids are built rehabilitates older coasters that might otherwise reach the scrap yard. It is more cost effective than building a new coaster from scratch, and nearly all hybrids have been well-liked scream machines.

Rocky Mountain Construction (RMC) is the leader in bringing these steel and wooden creations to life, and there are a few parks out there that could really use the help of RMC to bring new life to some older wooden coasters. Here are five wooden roller coasters in the United States that could use the “RMC” treatment...

The Legend is a coaster at Holiday World & Splashin' Safari that opened in 2000. It was built by now-defunct Custom Coasters International. The Legend is themed after The Legend of Sleepy Hollow and riders are said to be chased through the woods by the Headless Horseman. This coaster features a 113 ft tall drop and speeds of 69 miles per hour. It lasts about two minutes and sends riders through multiple tunnels. The ride has regularly had updates such as new trains, modifications to accommodate two-train operations, and installing a new themed tunnel.

While most of the coasters on this list are here because they simply aren’t great, this is not the case with The Legend. On its own, The Legend is a pretty good wooden coaster. However, Holiday World also has two other, arguably better, wooden roller coasters. Holiday World could benefit greatly from adding a new coaster to their small roster, and the more cost-effective process of converting one of their wooden coasters could be the answer for this park.

The Boss is a massive wooden coaster at Six Flags St. Louis that was also built by Custom Coasters International. This behemoth opened in 2000 and features a 150 ft drop into a ravine and speeds of 66 miles per hour. It has been called a “terrain twister” due to the way that it dips and weaves with the terrain over 12 acres. The ride has also undergone some changes over the years, which may not have done the ride many favors. Instead of giving the coaster new trains, it has received used trains from other coasters. In 2018, the massive helix was removed from the ride shortening it by over 400 ft.

The Boss’s massive terrain and long track make it a great candidate for becoming a great hybrid coaster. Additionally, The Boss isn’t known for its entirely smooth ride, and an update could make for a more comfortable coaster. Six Flags St. Louis has two other wooden coasters and is a smaller park as far as Six Flags parks go. It does not have that many roller coasters. The cost of converting The Boss rather than building an entirely new coaster would be beneficial and help to draw attention to the park.

Wildcat is a roller coaster at Hersheypark that opened in 1996. It is somewhat historic as it was the first wooden roller coaster manufactured by popular wooden coaster manufacturer, Great Coasters International. It includes an 85 ft drop and speeds of 45 miles per hour. Visually, the coaster looks cool as it twists and turns into itself, but the ride is actually rather short at under a minute and a half. After gaining a reputation for roughness, it received new trains which improved the comfort of the ride somewhat.

Even following the updated trains, many still believe Wildcat to be a somewhat rough ride, and others call it boring. The twisted nature of the track makes Wildcat a great candidate for the "RMC" Treatment. Additionally, it would improve the comfortability and thrills the ride offers. Hersheypark is building quite the coaster line-up and is truly on track to rival parks such as Cedar Point (some believe it already does). Adding a hybrid coaster to their park would improve an already impressive roster, and still leave them with two other good wooden coasters.

The Grizzly is a smaller coaster located at California’s Great America and opened in 1986. It was built by Kings Island Construction, Maintenance, and Engineering Department, and includes an 88 ft drop and reaches speeds of 55 miles per hour. It has what is considered an “out and back” layout where riders are greeted with a few turns and rather small hills and dips.

This coaster is said to be, simply put, boring. It has even ranked as the Worst Wooden Roller Coaster on many enthusiast lists. It does not have many thrills, which, to be fair, was not the intention as it was designed to be a family coaster. However, of the 9 roller coasters at California’s Great America, three are considered “Kiddie Coasters.” The park could use more thrilling coasters in its roster. Additionally, California’s Great America does not have much room to expand so revamping a coaster they already have would not only be cost-effective but make use of the land they already own.

As of 2020 it was set to receive new Titan Track from Great Coasters International on parts of its layout. This would make Predator a hybrid coaster and probably improve the thrills and comfortability of the ride, however since being announced this update has yet to take place leaving many to wonder if the project has been scrapped. This would be the second time Six Flags has talked about converting Predator with no success. Perhaps a partnership with Rocky Mountain Construction is just what the park needs to make this idea a reality.

Ugh. I had a rough ride on the Wildcat. Rough enough that I vowed never to go on it again. I suppose if they can create some smoother system, I might be open to it but until then I'm staying off. (And, I know, it just closed anyway.)

I think there's some possibilities here. However, one I disagree with is The Boss at Six Flags St. Louis. First of all it's not all that rough... I've been on plenty worse than that one. Yeah it probably could use some re-tracking and new (not used) trains but the way it shakes and rumbles through the terrain wouldn't be the same if it was entirely smooth on an RMC. Also RMC would I'm sure put inversions into the layout which would drastically change the ride experience. I personally hope The Boss lives on as is with a few upgrades in future years. It's in my top 3 fav Wooden Wonders along with The Beast and Pheonix (and yes I have ridden El Toro and The Boss is WAY better in my opinion!)

The Grizzly and (Rebel Yell) Racer 75 at Kings Dominion needs to be completely torn down. The grizzly beats and jerks the ever loving crap out of you and the Racer 75 feels like it’s going to jump track on the Midway turn and it’s pretty rough.

RMC does a great job with their hybrids. But really need to upgrade the restraints. Belt and lap bar too clumsy and slows down ops to a crawl.