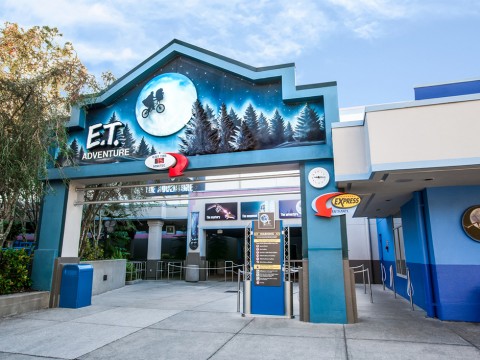 For some, Universal Orlando’s E.T. Adventure is a must-do attraction within the Universal Studios park, but for others this 90s time capsule, tucked away in Woody Woodpecker’s KidZone, only really stands to notice when Transformers is sitting at a 60+ minute wait and you’re just looking to find some much-needed air-conditioning.

The attraction invites riders to hop on a pedal bike and take to the skies as you help E.T. return to his home planet on your very own adventure straight out of Steven Spielberg’s 1982 movie. With E.T. Adventure having delighted guests for more than 30 years now, the ride oftentimes finds itself at the centre of various rumors which suggest that the attraction may not have long left on its shelf life. Universal’s contract with Spielberg is often believed to be behind E.T. Adventure’s long-standing history within the park, however, this remains largely speculative. If you are among those who feel as though E.T. Adventure could do with an urgent replacement, here are just a few reasons why we feel it deserves to stay…

It goes without saying that those who want E.T. to remain in Universal Studios forever are largely driven by the nostalgia that the ride holds. E.T. Adventure is one of Universal’s two remaining opening day attractions alongside the Horror Makeup Show, having long since said goodbye to other fellow classics such as Jaws and Kongfrontation.

From the old school pre-show video in which Spielberg details your impending adventure, to animatronic E.T. bidding you a croaky goodbye at the end of your experience - the ride, for many, is a nostalgic blast from the past, whether you grew up with the Universal parks or simply harbour a deep love for the sci-fi classic itself.

2. An ode to practical effects

Universal gets a lot of a flak for its love of screens but given that E.T. Adventure’s conception coincided with a time when screen rides were considerably less common, the ride remains one of the few non-screen-based attractions within Universal Studios today, relying solely on practical effects and animatronics.

While the Green Planet may not induce the same child-like wonder and disbelief in guests that it did three decades ago, the ride’s ability to transport you into Spielberg’s classic story without directly displaying scenes from the film on a huge screen is certainly a feat in itself.

While E.T. adventure may no longer be amongst Universal’s line-up of more innovative attractions, there are still plenty of elements within the ride that make it well worth it’s average wait time. Scenes such as the city scape below as you transport E.T. safely home still earn a sweet “woah” from new riders and nothing beats that first lift into the sky, as you hear “Look, they’re flying!” followed by John Williams’ tingle-inducing theme song.

4. Perfect for the little ones

E.T. certainly helps balance the scales of Universal’s thrill ride to family ride ratio. Recent years have seen the Universal parks welcome exciting additions such as VelociCoaster and Hagrid’s Magical Creatures Motorbike Adventure (both over in Islands of Adventure) which are equally incredible attractions and absolute must-do experiences for those who are tall enough to ride.

For the littler ones, however, E.T. Adventure offers a rather unique experience when you compare it to other child-friendly rides that the Central Orlando parks have to offer, meaning that the entire family can experience the magic of E.T.’s story together.

5. The last one standing

Orlando’s E.T. Adventure is particularly special as it now officially stands as the only version of the ride that remains in operation today. Both Universal Studios Hollywood and Universal Studios Japan previously boasted their very own iterations of the ride, with Hollywood’s closing back in 2003 and Japan’s closing in 2009. Now, Orlando is the only place in the world where you can ‘experience the mystery, feel the suspense and ride the adventure’ making it even more worthy of its place within Universal Orlando’s attractions line up.

How do you feel about E.T. Adventure? Do you think it’s time for a replacement, or is it still one of your must-do rides?

I just visited Universal Orlando back in August of 2021 and just last week in May 2022! E.T. is by far still my favorite ride at both of the parks! E.T. was amazing in 2003 when I first visited Universal amd still holds up. The wonderful details, the nostalgia, the temperature and The Smell!!! I freaking LOVE ❤️ the smell in there!!! In my opinion.. The Perfect Ride!

Indiana Jones would say "it belongs in a museum!" I say, keep it where it's at, it will be seen and appreciated by millions of people and spark interest in watching the movie to a younger generation that are watching remakes of past great movies now that writers ran out of ideas....

Absolutely love this ride, full of charm, nice change of pace from all the other rides. Relaxing cute way to chill from all the thrill rides, as well as the temperature. Despite it's age and dated aesthetics , I would not change a thing.

Never get rid of the E.T. ride! It's still a great ride and is very enjoyable AND then throw in the nostalgic feel from watching the movie over the years, it just needs to stay.

You give five reasons why it shouldn't be replaced. I could give you a hundred reasons why it should be. The most egregious offenses being it's old, outdated, and I would be generous saying that only 50% of people in America actually know the movie. It's old, it's tired, get rid of it. It had its heyday, don't get me wrong it was great for its time. However, "its time," was 30 years ago. They should have gotten rid of this way before Jaws. Jaws was a great experience. This is nostalgic at best. And only for those people who actually remember it. For the record, I am one of those people that remembers, however, most people who visit the parks these days don't even know who ET is. It's outdated. Bye Felicia.