Into the Unknown: The Trek to Kings Dominion’s “Jungle X-pedition” and How It's a Model For Seasonal Park Theming 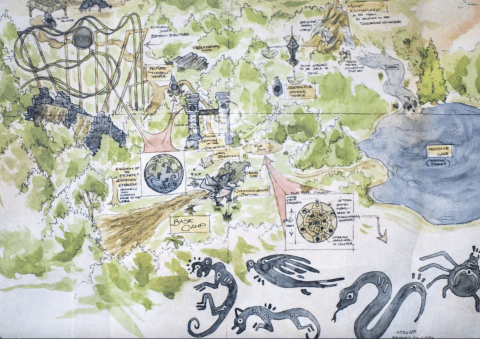 For many grown-up entertainment industry aficionados, there’s a lesson learned early on the discussion boards and forums that shape us into the fans we are: that there exists a great and fundamental schism between regional and destination parks; thrills and storytelling; amusement parks and theme parks.

Yep, for those of us who grew up closer to a Six Flags than a Magic Kingdom, some truths are self-evident: roller coasters are the only real anchor attractions, hot dogs and chicken fingers are premium eats, and dark rides are a luxury reserved for Orlando and Anaheim. Basically, if you visit a park outside the industry’s industry leaders, you know what you’re getting into.

But after years of increasingly dipping their toes into the well of stylization, storytelling, and “theming,” it appears that Cedar Fair’s Kings Dominion in Doswell, Virginia is staking a claim we’re thrilled to see. The park’s newly-rechristened Jungle X-pedition “land” isn’t just a freshening of the park’s legacy land of adventure… it’s a bold step into the unknown, offering a model for “mere” amusement parks across the country to build a world, and to mean it. Ready to blaze a trail into the jungle? Let’s start at the beginning…

When Kings Dominion opened in 1975, the Virginia park had a lot in common with its older sister – 1972’s Kings Island.

First (and most noticeably), both parks were among the first to open “A.D.” – that is, “After Disney World.” In fact, the collision of Magic Kingdom’s 1971 debut and the start of the “Second Golden Age of the Roller Coaster” (often credited to Kings Island’s own Racer) were all ingredients in the formation of a new generation of amusement parks. The original Six Flags (Over Texas, Over Georgia, and Over Mid-America), the soon-to-be Six Flags (Great Adventure and Magic Mountain), the Marriott parks (today, Six Flags and California’s Great Americas), and the Kings Entertainment Company parks (Kings Island, Kings Dominion, Carowinds, and Canada’s Wonderland) all cropped up between the late ‘60s and late ‘70s.

That means that – like most of its “A.D.” contemporaries – Kings Dominion included a “Main Street” (the fountain-lined International Street), a central park icon (a 300-foot replica of the Eiffel Tower), and a central Hub with paths branching into themed “lands”. There was the rustic village of Old Virginia; the midway-stylized Candy Apple Grove with its own classic racing coaster and fairground rides; The Happy Land of Hanna-Barbera; and – most interesting for today’s story – the Lion Country Safari.

The 100-acre exotic Lion Country zoological park had actually opened a year before the rest of Kings Dominion as a drive-through experience, but the opening of the park in 1975 saw the road replaced with a 2-mile, 20-minute monorail trip through African, Asian, and North American animal habitats. Its portal from the park – Safari Village – was likewise a vaguely-African themed outpost of thatch-roofed huts and “jungle” themed flat rides (like the Parrot Trooper swings and Mt. Kilimanjaro banyan kurve, circling through a scaled-down mountain and waterfall).

Growing as quickly as Virginia’s forests around it, Safari Village soon became home to some of Kings Dominion’s most landmark attractions. For example, in 1979, The Lost World opened.

One of the largest attractions ever conceived outside of a Disney or Universal park, the $17-million, 170-foot tall, craggily, stylized Lost World peak contained within it three separate attractions – The Haunted River boat ride, the Land of Dooz dark ride (on level two, with an outdoor section visible above), and the Time Shaft spinning rotor. Truly, the mountain was a sub-land within Safari Village, with the mountain serving as a landmark for the jungle land and indeed, the whole park.

In 1988, Avalanche arrived. Manufactured by Mack Rides, the unique Bobsled roller coaster means that trains aren’t affixed to rails, but instead slalom through open troughs, banking and slaloming according to the weight distribution of tandem-seated riders. (While “Avalanche” conjured images more akin to a snowy Swiss mountain than the jungle aesthetic of Safari Village and the Lost World, at least Avalanche maintained a sense of adventure!)

In 1991, Safari Village grew again with the addition of Anaconda – an Arrow multi-looper coaster that saw riders plunge 144-feet down in an underwater tunnel passing through the park’s Safari-Village-adjacent Lake Charles, slithering through four inversions.

In other words, even by the early ‘90s, Kings Dominion and its Safari Village offered a pretty solid collection of attractions (the Wild Animal Safari Monorail, Avalanche, Anaconda, and the Lost World’s Haunted River, Time Shaft, and Smurf Mountain rides), all wrapped in fairly coherent and consistent “theming.” Then came the movie makeover… Read on…