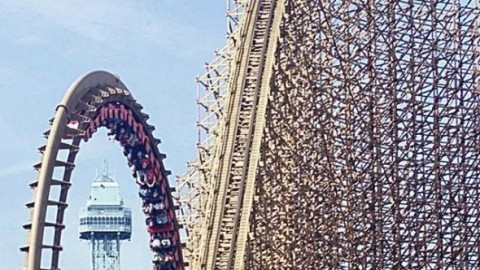 Nearly all roller coasters open to excited guests and high expectations for the new thrills they will bring to each theme park. However, occasionally that excitement wanes and the expectations are simply not met.

No coaster is probably more infamous than the behemoth wooden coaster that was Son of Beast. Son of Beast was the first hyper wooden coaster in the world when it opened at Kings Island in 2000. At its time of opening, the coaster set a whopping seven records including the tallest and fastest wooden roller coaster.

The massive coaster featured a 216 ft tall hill and the first vertical loop for a wooden coaster. The ride was themed after Kings Island’s beloved classic wooden coaster, The Beast. However, this coaster did not live up to its predecessor. The ride was plagued with problems from the start. The ride was designed by now-defunct Roller Coaster Corporation of America, and they were even fired before completing the coaster. The coaster required many design corrections in its first year of operation.

From early on, riders complained that the coaster was incredibly rough. Others said that the large helix was even rather boring, and some guests even claim that the loop was the only comfortable part of the ride, although the loop was removed in 2006.

There are a couple of major incidents that occurred in relation to Son of Beast. The first was in 2006 when nearly 30 riders were sent to the hospital with head and neck injuries after a crack in the track caused riders to be jolted. None of the injuries were life-threatening, but the ride remained closed for the season and reopened in 2007 after an investigation. The ride closed indefinitely after a rider claimed to have suffered a ruptured blood vessel due to a head injury obtained while riding Son of Beast. Unfortunately, the ride never reopened following this incident.

Was Son of Beast just a little ahead of its time? Perhaps, if renowned coaster manufacturer Rocky Mountain Construction had the reins, Son of Beast would have been able to follow in The Beast’s rather large footprints. Would you have ridden this record-breaking coaster?

Arrow attempted to recreate B&M’s tubular support structure instead of their usual cross beam supports, and they were not familiar enough with this other type of support. This led to an incredibly rough ride even from the start. The ride featured a 150 ft tall hill and six inversions including one part way down the first drop. However, it could never measure up to what Busch Gardens had envisioned and is largely thought to be a failure of a coaster. Busch Gardens removed one of the inversions in 1994, but the ride’s popularity continued to dwindle. In the middle of the 1998 season, Drachen Fire permanently closed.

Fortunately, Arrow Dynamics has not repeated their mistakes since, and Busch Gardens Williamsburg has added several great coasters to their lineup, including Pantheon, which just opened last month. Would you have ridden Drachen Fire?

Not to be confused with Viper at Six Flags Great America, this Viper slithered into Six Flags Great Adventure in 1995 and was designed by Japanese manufacturer TOGO. Six Flags had originally wanted a coaster themed to the Clint Eastern drama Unforgiven, but the movie was decidedly too dark, and the park opted for the Viper name and theming instead. The original theme may have been appropriate however, as those who have ridden this coaster have been unforgiving and many coaster enthusiasts list this coaster as the worst coaster of all time.

Viper was a steel looping coaster that had a 65 ft tall dive drop and two inversions. It also had rings around much of the track, giving it a snake like look. The queue was exceptionally elaborate for a Six Flags park, and even included a wild west comedy show called Legend of Venom Gulch. This may be one of the first times a queue for a ride was better than the ride itself. From the start, Viper faced repeated down time and riders called the ride painful. It regularly had issues, and Six Flags had difficulties getting replacement parts as manufacturer TOGO faced financial difficulties related to another failed coaster and eventually shut down. In 2001, the coaster was closed for the season and reopened in 2002 with new restraints and track modifications. This was not enough to redeem this coaster, and the ride closed for good in 2004.

The removal of Viper made room for giant wooden coaster, El Toro which is widely believed to be a great coaster. Would you have given Viper a chance, even just to wait in the elaborate queue?