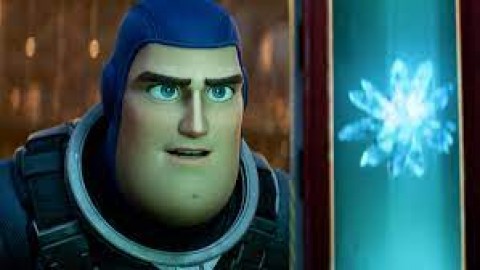 Disney and Pixar are always churning out sequels to our favorite movies, whether it's Finding Nemo, Cars, Monsters, Inc., or Toy Story. But we're not quite sure how to label the upcoming movie Lightyear. It's in no way a sequel, because it doesn't occupy the same fictional universe as the Toy Story movies.

The CG-animated movie stars Chris Evans as the titular space ranger, who, along with his fellow astronauts, becomes marooned on an alien world, and must find a way to return home. However, as you may have already guessed, this Buzz Lightyear is not the one you've known and loved over the years.

In this movie, Buzz is a human being (he's not a "child's play-thing"), and has far more points of articulation than any action figure. Think of it as being along the lines of the animated series Buzz Lightyear of Star Command - in other words, this is Buzz Lightyear's world, in which there's no room for cowboys and potato heads!

With that said, it's possible that the Buzz Lightyear action figure will be referenced in this movie, and it's likely that Chris Evans' character will go on to inspire said-toy and the rest of the merchandising lines as seen in the Toy Story movies, such as the Little Green Men and Emperor Zurg (who will also appear in Lightyear).

So, it looks like Lightyear is a spin-off of some kind. But could it be the beginning of a new era of "Toy Story" movies? Will we next see a Woody-centric movie set in the Old West? Now that would be neat. Well, however things unfold in the world of film is a different matter entirely to how Lightyear could transpire in Disney Parks.

There might not be any room in Lightyear for a space ranger and a sheriff, but is there room at Disney Parks for two very different versions of Buzz Lightyear? Or do they just look far too similar, and would therefore be destined to cause confusion among guests? Let's take a look at how Lightyear could work in a Disney setting.

Buzz Lightyear can be found at most Disney Parks throughout the world, and along with Woody and Jesse, the character was recently given an upgrade at the likes of Walt Disney World and Hong Kong Disneyland, and now all three look far more like their onscreen counterparts than they did previously (see the above image for the old costumes, which were first introduced in the '90s and never quite lived up to the quality seen in the films).

So how could the Lightyear version of Buzz work as a character in Disney Parks? Well, as that character is meant to be human and not plastic, it's likely that the actor in the park costume would have their face revealed (like Peter Pan, as opposed to Captain Hook). This would help separate both versions of Buzz Lightyear, and not only that, but the new version probably wouldn't occupy the same area as the current one.

This is already useful for a future ride that revolves around the new Pixar movie Lightyear. The main distinguishing feature would be that such an attraction would of course include humans (or at least animatronic versions) and not toys. Not only that, but the ride wouldn't need to follow the same format as the existing Buzz Lightyear ones. It could be anything, from a walk-through to a simulator experience.

When it comes to Buzz Lightyear merchandise at Disney Parks, it's fair to say that it goes to infinity and beyond, because you can find something in pretty much every outlet. There's no doubt whatsoever that Disney will want to cash in on Lightyear by unleashing a wave of goodies at the parks, from apparel to accessories, and action figures to anything else you could possibly think of.

This is something that will be pretty easy to separate from the regular Toy Story merchandise. In fact, several lines of Lightyear merchandise have already been unveiled, in the form of an 11.5-inch action figure, an XL-15 spaceship, Buzz's robot cot, Sox, and many more. These are expected to release during Spring, while more sets will become available later in the year. So when you see these at the parks, expect your eyeballs to be "sucked from their sockets"!

Pixar's Lightyear will be making a landing in theaters on June 17 this year. You can check out the latest trailer here. Do you think Pixar's Lightyear has a place in the Disney parks? Let us know your thoughts by leaving us a comment below or on our Facebook page.