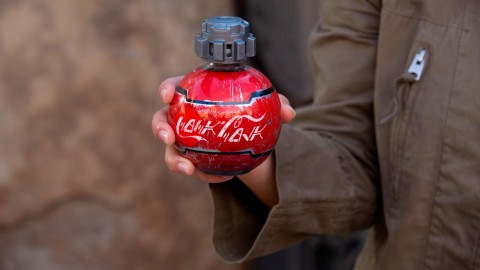 Between $8 Blue Milks, $20 Individual Lightning Lanes, $50 plush Loth caths, $100 interactive Droids, and $220 Lightsabers, it's really no surprise that Star Wars: Galaxy's Edge has been criticized by some for placing the land's best (and most Star-Wars-y) experiences behind a paywall that's outrageously priced... even for Disney.

So for those of us who travel the galaxy with fewer credits set aside for Batuu's "in-universe" souvenirs, what can we take home from Disney's most immersive themed land? Today, we're scouring the marketplace of Black Spire Outpost for inexpensive souvenirs that'll still scream "Star Wars" and memorialize your trip to a galaxy far, far away... without draining your credits.

When the Wizarding World of Harry Potter opened in 2010, the village of Hogsmeade introduced a whole new formula for "immersive lands" going forward. Just as interesting as the land's many exclusive souvenirs, though, was what the Wizarding World did not have: Coca-Cola. Yep, Coke, Diet Coke, Sprite, and Dasani didn't make sense in a storybook Scottish hamlet, so they were kicked out in favor of "in-universe" drinks like Butterbeer, Pumpkin Juice, and Gilly Water.

The lack of Coke in the Wizarding World became one of the land's signature bits of trivia, and "proof" of just how far Universal was willing to go to make the land feel "real." So when Disney announced their clear answer to the Wizarding World – Star Wars: Galaxy's Edge – fans wondered whether they would similarly rebuke their longstanding partnership with Coke in favor of only "in-universe" drinks. Well... not exactly.

Luckily, since Disney controls Star Wars' official cannon, it was easy enough to add a little addendum to the space western's rule book, insisting that Coca-Cola is a drink beloved across the galaxy. Even in Aurebesh, it's pretty easy to pick out the Coca-Cola, Sprite, and Dasani logos, now plastered on grenade-shaped "Thermal Detonator" bottles. The 13.5 ounce orbs sell for around $6, making them probably the most expensive per-ounce Coke you'll ever drink... but the TSA has officially approved the emptied bottles for transport home, where they make a relatively inexpensive Galaxy's Edge souvenir.

As you can imagine, the sporks pretty quickly "walked away" with guests, and within days of Galaxy's Edge opening, dozens could be found across eBay as thieves raced to sell the stolen cutlery. Just two weeks after the land's opening, the sporks were pulled from the restaurant, replaced with regular old spoons and forks – thanks scalpers! (Names like "tip-yip" and "shaak roast" didn't last much longer, as test-and-adjust crowds revealed the need for Earth names like "chicken" and "beef" on Batuu.)

In March 2021, the sporks made a surprise return... this time, as an add-on. For $10.99, you can add a spork (with a burlap-style, cinched traveling bag for it!) to your Docking Bay 7 Mobile Order. $11 might seem like a lot for a single piece of cutlery, but the spork probably does work better as a souvenir than as the restaurant's standard silverware, and like we said, it's "Star-Wars-y" enough that you really will associate it with Galaxy's Edge everytime you open your silverware drawer!

There's a caveat to our promise of a "free" souvenir here, because your first step to snagging an Oga's Cantina coaster is to get a reservation to Oga's Cantina. That's not easy to do, probably because it's A) a bar, B) in Star Wars: Galaxy's Edge, that C) recreates a definitive experience from the Star Wars films, making it one of the hottest reservations in Disneyland and Disney's Hollywood Studios. (Thus making it another very Star-Wars-y experience that a vast majority of park guests just, like, can't see or participate in on any given day.)

Either snuggled up to strangers at the bar, standing at a high-top table, or settled into a sought-after booth, you can jam out to the remixes of DJ REX while sipping comic mixed drinks. For the thrifty among us, though, the little cardboard coasters slid under your glass are decked out in Oga's designs. There are reportedly five different coaster designs, and since they're not reusable, you're welcome to take them home. (It goes without saying: don't try to take anything else – like a menu, glass, or utensil home... c'mon.) If you traveled with a big party (or made serious use of your allotted 45-minute stay), you could end up with a full set of coasters for home... for free*!