"'Be Fair to Disney World!' – 6 Disneyland Attraction Plusses We WISH Disney World Would Invest In 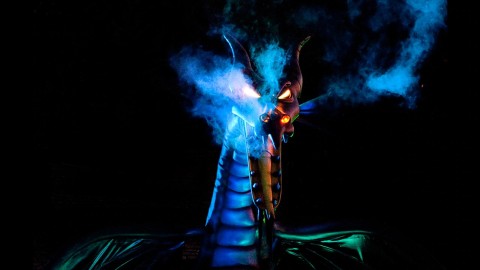 According to "Disney legend," back in the earliest days of Disneyland, Walt was wandering around the park as he often did, mingling wih guests and taking in the sights. While passing through Adventureland, he heard a guest assure his family that they didn't need to go on Jungle Cruise since they'd already ridden it the last time they'd visited. Horrified, Walt turned to his Imagineers with a simple request: "Plus it."

Since then, the notion of returning to even the most classic Disney rides to "plus" them with new effects, new technologies, and new story elements has been one of the key ingredients that's kept Disney's theme parks feeling fresh, new, and alive. Walt said, "Disneyland will never be completed. It will continue to grow as long as there is imagination left in the world."

But looking across Disney Parks, some fans can't help but feel that when it comes to "the little things" – the happenstance, piecemeal "plusses" like added projection, improved lighting, and integrated new effects – Disney World tends to get the short end of the stick. It's true that Disney World's global audience takes some of the pressure off of executives to fund "the little things" versus Disneyland's locally-oriented, generations-long following. But the 5 "plusses" below are wildly effective updates that would really add up! What do you think? Do these "little things" matter? Or are Magic Kingdom's rides just fine without the technological flourishes that Disneyland's receive?

In Anaheim, Orlando, Tokyo, and Paris, "The Wildest Ride in the Wilderness" sends runaway mine trains squealing through canyons, around rock formations, and into abandoned mines. Along the way, each version of the ride features a third lift hill through the mountain's core. Originally, this "finale" lift hill included shuddering, rumbling rocks, giving the impression of a mine collapse. That effect was shut off across the globe in 2011 when a "loose rock" actually did fall on the train in Paris, injuring guests.

Without an "earthquake" finale, the final ascent and the last run out felt like it was missing something. In 2013, Disneyland's version of the ride closed for an unprecedented 15-month refurbishment, during which the entire track was removed and replaced.

The in-depth effort also came with a new "explosive" finale. As guests enter the third lift hill, a knocked-over lantern accidentally ignites fuses rigged along the ascending cave walls. Just as guests reach the mid-way point, bundles of dynamite are lit, with two small blasts triggered on each side of the train, then a massive blast of smoke (with a projection-mapped explosion) released from overhead.

The "explosive" finale is a brilliant example of how simple technologies can "plus" an already-beloved show. It was rolled out at Disneyland Paris in 2016, and when Magic Kingdom's version of the ride closed for a lengthy refurbishment that same year, it was a foregone conclusion that it, too, would get the new ending. It didn't. Then, when Disney World's parks re-opened in June 2020 during the pandemic, Big Thunder Mountain stayed closed as part of another lengthy refurbishment. Would it get the "explosive" finale in time for the resort's 50th Anniversary Celebration? Of course not.

It's just one example of our 16 Disneyland Exclusives That Should Make Disney World Fans Jealous. And it's not the only easy, obvious "plus" that Disneyland's gotten and Disney World has just passed up.

As we saw in our recent By The Numbers: Dark Ride Count Countdown feature, Disneyland is the dark ride capital of Disney Parks. It not only features all three of Fantasyland's Opening Day Originals (Snow White, Mr. Toad, and Peter Pan), but also dark rides based on Pinocchio and Alice in Wonderland, all packed into the tiniest "Castle Park" on Earth! Probably because Disneyland is considered "hallowed ground" by Imagineers, local-and-vocal fans, and even executives, the charming dark rides there aren't just preserved; they're plussed.

In the last decade, Disney Imagineers have meticulously returned to Alice in Wonderland, Peter Pan's Flight, and Snow White's Enchanted Wish to "plus" them all with new technologies. Smartly, these "shining ups" don't go over the top. While it would've been easy for Disney to plop clones of the Seven Dwarf's Mine Train's Dopey and Doc Animatronics into the Snow White ride, that would totally not match the scope of these classic, blacklight experiences. Instead, it's simple figures like a waving Dopey and gem-examining Doc that feel like perfect additions

Each has subtle projection, vivid lighting, and wonderful, simple new effects placed throughout so naturally, you'd think they were always there. From the Evil Queen's throne room rusting and decaying as she turns into the Wicked Witch, to living flowers bringing Wonderland to life, and fiber-optic forests that glow as Snow White awakens, and water lapping around the River Thames, Neverland's beaches, and Tiger Lilly as the tide comes in (above), these subtle changes feel like elements that would've been included back in the '50s if the technology had existed.

Of course, of the original three dark rides, only one – Peter Pan's Flight – remains at Magic Kingdom. (The others – the Lost Legends: Snow White's Scary Adventures and Mr. Toad's Wild Ride – are gone, with The Many Adventures of Winnie the Pooh and Journey of the Little Mermaid joining the land instead.) Though Pan got a new queue in 2014, the ride itself wasn't really touched, and though the "little things" upgraded in Disneyland's version aren't deal-breakers, they add up to a very fresh experience that feels cared for and preserved for future generations.

Despite opening within two years of each other (1975 in Florida and 1977 in California), the two Space Mountains couldn't be more different. Disney World's take a cue from the Matterhorn, with two side-by-side, mirror-imaged track layouts and sled-style trains; Disneyland's is an original creation, with a single track. By their stats, both are pretty mild coasters (with just 25mph and 32 mph top speeds, respectively) made extraordinary by being in the dark. But beyond that, even their experiences are significantly different.

In 1996, Disneyland's version of the ride gained an on-board audio score composed by Aarin Richard, featuring sci-fi sounds remixed with iconic surf rock guitar riffs by Dick Dale. Then, in 2004, Disneyland's version of the ride closed for the same kind of rebuild that would come to Big Thunder a decade later. The track was fully scrapped and rebuilt from scratch. A new, enclosed projection tunnel surrounded the ride's lift hill; new trains came equipped with a custom music score by Michael Giacchino (composer of The Incredibles, Lost, Alias, the MCU's Dr. Strange and Spider-Man movies, and much more).

Customizable music and projection capabilities throughout the ride's lifts and main area also allow for overlays, like the retired Space Mountain: Ghost Galaxy (with a cosmic entity chasing riders through the dome) and Hyperspace Mountain, (above, featuring a Star Wars mission using the projected lift hill tunnel to jump to lightspeed), both which left returning guests cheering – and that's pretty cool for a ride from the '70s!

After you've been on Disneyland's smooth, modern coaster with synchronized music and HD projection, it's kind of hard to believe that Magic Kingdom's ride is still just riders screaming in the echoing darkness. Don't misunderstand: some fans prefer Magic Kingdom's Space Mountain precisely because it's pretty much exactly the same ride that it was almost 50 years ago; a nostalgic, Space Age throwback whose simplicity is its strength! But let's not let Disney off the hook here: Florida's Space Mountain could have on-board audio and seasonal overlays, which feels like a missed opportunity.

And that's not all.. Read on as we look at three other Disneyland "plusses" that have somehow skipped Walt Disney World entirely...