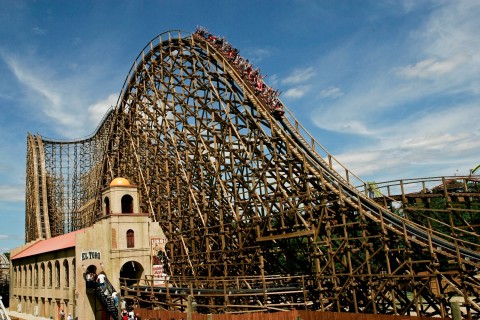 Six Flags is arguably North America’s most notable park chain. When you hear the name, odds are you're thinking of nostalgic roller coasters and Vengaboys's "We Like to Party." Yes, these parks are known for their product placement and sometimes lackluster concrete midways, but there’s a charm unique to Six Flags parks that’s hard to find anywhere else. When I think of the American amusement park, of Ferris wheels or hot popcorn, I think of Six Flags.

After last month’s duel of the two Busch Gardens parks, today we’ll be looking at two of the largest and most popular of the Six Flags chain. These parks are found on opposite coasts, with a range of coasters, flat rides, and happenings to keep parkgoers entertained. The parks to which I’m referring, of course, are Six Flags Magic Mountain and Six Flags Great Adventure. These parks have massive coaster counts and annual attendance, and though they’re parks of the same chain, they offer surprisingly varying visits.

Today we’ll be putting these two parks head-to-head in five separate categories: rides, things to do, events, theming, and overall atmosphere. In the end, one park will be crowned the victor.

Quite frankly, Six Flags parks would be nothing without their rides. That’s not a slight to the chain, but a testament to their priorities. While other parks may invest more into atmosphere, food, and non-ride experiences, Six Flags pours into their rides. Six Flags takes risks in their ride choices. Think of Rocky Mountain Construction’s success, and think of the first park to give them a chance: Six Flags Over Texas. Though more seasoned parkgoers are hard on Six Flags parks for their operations and cloned coasters, Six Flags ride lineups are almost all varied and balanced near-perfectly.

Six Flags Magic Mountain holds the record for most roller coasters at a single park, with 19 and another on the way. Among this list you’ll find Six Flags classics like a Batman clone and one of many Goliaths, this one a unique Giovanola, but this park also has some unique rides, such as X2, an Arrow 4D coaster, Full Throttle, and two (yes, two) mobius loop coasters in Twisted Colossus and West Coast Racers, the park’s newest coaster. Tatsu, a Bolliger and Mabillard flying coaster, is widely considered the most forceful and beloved of the model.

While Magic Mountain will soon have 20 coasters, Great Adventure has only 14. No competition, right? But Great Adventure’s 14 coasters (still an impressive lineup) go a long way. Yes, this park has a Batman clone. Yes, this park has an S&S Free Spin, which some don’t even consider a proper coaster. But this park also has Kingda Ka, the world’s tallest coaster. This park also has El Toro, an Intamin prefabricated coaster that holds a spot in my heart and top five. This park has a one-of-a-kind RMC single rail coaster. It’s hard to ignore the quality of Great Adventure’s big three, which holds its own against Cedar Point, Busch Gardens Tampa, and yes, Magic Mountain, too.

These two parks present the perfect predicament of quantity versus quality, each impressive in their own right. It may come down to preference which park has the better offering of coasters. While my love for El Toro pushes Great Adventure high in the ranks for me, with Magic Mountain holding the world record for most coasters for so long, it’s difficult to crown another park above it.

As aforementioned, Six Flags parks aren’t standouts when it comes to things to do outside of thrilling rides. That said, both parks have diverse dining options and expansive plots of land to explore.

Six Flags Great Adventure does take the cake here thanks to its offerings of animal attractions. Great Adventure has a wonderful drive-through safari where you can get close to wildlife from the Americas, Africa, Australia, and more.

When it comes to events, both parks are pretty consistent in their offerings, with the standard holiday-centered events like Fright Fest and Holidays in the Park. Great Adventure does have a slight edge in events thanks to their second annual Thrill-A-Thon, an event aimed toward coaster enthusiasts. This event is similar to HoliWood Nights, where coaster enthusiasts can experience extended ride times and exclusive access. Though neither park is all too focused on events, Great Adventure has the lead here.

But what about theming and atmosphere?...