Which Disney and Universal Parks Have the MOST Dark Rides? You May Be Surprised... 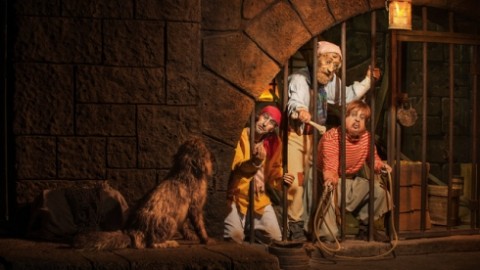 Here at Theme Park Tourist, we're all about seeing the parks we love differently. One of the lenses we've used is our "By The Numbers" mini-series, with each entry offering a unique lens for comparing the incomparable Disney and Universal Parks around the globe! From the number of rides to the number of surviving "Opening Day Originals" and the number of certifiable E-Tickets, these just-for-fun comparisons offer new ways to discuss the industry.

Today, we'll add another: the number of dark rides each park offers. Counting a park's dark rides isn't easy, and it isn't objective. Traditionally, a "dark ride" is a genre of amusement park ride wherein riders travel through indoor, painted or projected, theatrically-lit scenes. But in the 21st century, it's a lot more complicated than that...

What is a dark ride?

Depending on your definition, dark rides can be traditional (like Mr. Toad's Wild Ride) or technological (like Dinosaur); they can be slow (like Haunted Mansion) or thrilling (like Harry Potter and the Forbidden Journey). Dark rides can be interactive and screen-based (like Toy Story Midway Mania), or immersive and physical (like Rise of the Resistance)! ...or simulators (like Soarin')! ...or walkthroughs (like Poseidon's Fury)! ...or water rides (like Na'vi River Journey)! ...or roller coasters (like Revenge of the Mummy)! A dark ride doesn't need to be dark (think "small world") and argubly, it doesn't even necessarily need to be indoors (after all, wouldn't Jungle Cruise fit the bill?)!

Of course, we need to settle on a definition for our purposes today, so we'll start with our list of each park's rides meaning no walkthroughs, films, or non-ride "attractions" – a guest has to actually be moved by a ride system. For the sake of simplicity, we'll also say no simulators – though like walkthroughs, you might personally consider them a sub-genre of dark ride, and that would be fine! We'll also require that indoor, theatrically-lit scenes that established a sense of place or storytelling must be a more-than-incidental part of the experience. (Feel free to invent your own definition and recalculate!)

Got it? Then place your bets as to which parks will come out on top as we explore another new way of seeing how our favorite parks compare by the numbers...

In what may be a surprise, it’s Disney’s Animal Kingdom that lands in last place on our list, with just two dark rides. What’s perhaps even more surprising is that for the park’s first twenty years, its only dark ride was the terrifying Dinosaur (originally, Countdown to Extinction). We set off into the full story of one of Disney World’s scariest rides in our DINOSAUR in-depth feature, but the pulse-pounding, off-roading ride through a steaming prehistoric jungle filled with loud, angry, hungry dinosaurs has never exactly been a family favorite…

Blacklight Award: The arrival of NA'VI RIVER JOURNEY in 2017 as part of Pandora: The World of AVATAR represented a much-needed reprieve. The slow moving boat ride through the glowing, bioluminescent Valley of Mo’ara is a rare breed indeed – a ride where nothing “goes horribly wrong”! The tranquil, reflective journey is a great “Pandora 101” primer, providing glimpses into the otherworldly flora and fauna of the distant moon, and the lives of the indigeonous Na’vi people who connect with it.

After weaving layers of rainforest soundscapes into a musical tapestry, the ride concludes with an encounter with one of the Best Audio-Animatronics on Earth – the Na’vi Shaman of Songs, who orchestrates the living world around her in a symphony of sights and sounds. The colorful, thoughtful, and emotionally captivating ride suffers from just two things: it’s way too short, and its line is way too long.

Perhaps the park you’d expect to be in last place (it usually is, after all), the  Declassified Disaster: Walt Disney Studios Park at last bucks the trend. After being the smallest Disney park with the least rides at opening (just three) and the lowest E-Ticket count, it has at last been elevated to next-to-last position in our Dark Ride Count! Of course, when the park opened in 2002, it had none (a rare distinction), with each of its current three having been a metaphorical Band-Aid meant to bolster the very broken park.

CRUSH'S COASTER meets our definition thanks to an opening act of simple dark ride scenes, all encountered before it devolves into a “cute but dumb” spinning family coaster in a darkened soundstage. Likewise, THE TWILIGHT ZONE TOWER OF TERROR meets our requirements because a more-than-incidental part of the experience is far more than a drop ride, with riders ascending to two floors of the haunted Hollywood Tower Hotel to relive its history.

Blacklight Award: Listen – we dedicated an entire feature to REMY'S RATATOUILLE ADVENTURE not because it’s an infallible masterpiece of Imagineering (it isn’t) but because it represented exactly what the French park needed: a new footing. Ratatouille is a trackless dark ride “shrinks” guests to the size of a rat, then sends them scurrying along the rooftops of Paris and through the kitchen of Gusteau’s restaurant.

It’s a fun, frenzied family dark ride, sure. But more to the point, it’s a pivot point for the park, at last shifting from its piecemeal, “Studio”-stylized solutions into bringing to life idealized, romanticized lands with immersive, Disney-quality rides. That’ll continue with a multi-phase expansion bringing versions of existing Avengers, Frozen, and Star Wars mini-lands to the Parisian park. But for now, there’s no question that Ratatouille was the show of faith Walt Disney Studios needed.

It’s probably no coincidence that Walt Disney Studios is followed on this list by another low-budget park built just a few years after… Hong Kong Disneyland. Disney’s first Chinese theme park opened in 2005 without much celebration. That makes sense, because the park was pretty quickly identified as the third strike in then-CEO Michael Eisner’s infamous era of underbuilt, underfunded theme parks (he exited the company just a few months after its opening). Almost unbelievably, at the park's debut, it had just two dark rides – the omni-present Buzz Lightyear Astro Blasters, and just one Fantasyland dark ride: THE MANY ADVENTURES OF WINNIE THE POOH. That’s right – a Disneyland without a Pirates, Mansion, “small world,” Snow White, or even a Peter Pan’s Flight.

Like its sister parks from the early 2000s, Hong Kong Disneyland has required hundreds of millions of dollars in investment to become even a modest little Disney Park. That has included adding IT'S A SMALL WORLD, Autopia, Toy Story Land and Grizzly Gulch (with a Big Thunder-esque roller coaster), and a mini-Marvel land with the Iron Man Experience simulator (not included here) and a pretty cringey ANT-MAN AND THE WASP: NANO BATTLE! dark ride built on the bones of Buzz. A Frozen themed mini-land is well on the way, which will add two more dark rides to the park’s count. Even once they’re done, Imagineering enthusiasts will have the park on their bucket list for one reason…

Blacklight Award: Opened in 2013 as the culmination of the park’s first mega-expansion, Mystic Point is a mini-land bringing to life the remote jungles of Papua New Guinea where the elusive retired Lord Henry Mystic – longtime member of S.E.A. – has built an eclectic Victorian residence filled with oddities. We explored every room of MYSTIC MANOR in an in-depth Imagineering entry, but this mythic, musical spiritual sequel to the Haunted Mansion instantly became the must-see masterpiece of Imagineering.

Disneyland Paris's Railway also has a grand canyon diorama and passes through the caves offering a view into Pirates, so if Disneyland's counts, so should Paris's...