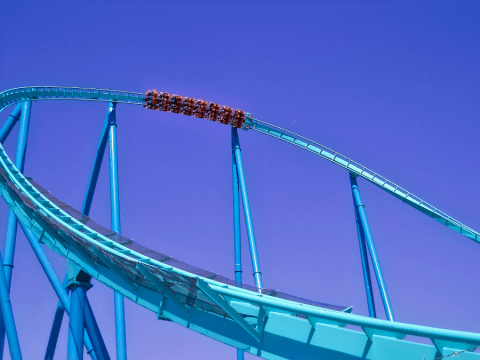 Roller coasters have been around for a very, very long time. But in the last 50 years especially, the Second Golden Age of the Roller Coaster has seen steel stretch into the sky. Year after year, decade after decade, the unthinkable continuously becomes real. Inversions. Launches. Switch tracks. Drop tracks. Racing coasters; suspended; inverted; flying; stand-up; dive; wing... When it comes to the creativity of roller coaster manufacturers, it can feel like the sky's the limit.

It all started when the unthinkable happened: the first roller coaster to break the 100-foot height barrior. A generation of so-called "mega-coasters" dotted the amusement park landscape throughout the '70s and '80s. Then came the 200-foot barrier with a generation of "hypercoasters."

But when it comes to the world's most extraordinary rides, it's hard to beat the very small family of 300-foot rides you'll find across three countries. Epic, staggering, and spectacular, the "gigacoaster" is a growing icon of thrillseeking... yet still a rarity around the world. Today, just six rides reside in the "giga" level – between 300 and 399 foot drops – each with its own story, elements, and personality... Join us as we explore the evolution of the "giga" through its six iterations, and look to where a 300 foot thrill machine may arise next...

When fabled coaster park Six Flags Magic Mountain opened Superman: The Escape in 1997, the ride was unlike anything seen before. Coming just a year after the launch (pun intended) of electromagnetic linear induction motor (LIM) technology first launched coasters without troublesome, friction-filled catapult or flywheel systems, Superman used linear synchronous motors (LSM) to do the same.

Superman's two parallel tracks each housed one single four-row, 15-seat ride vehicle with a single goal: to rapidly accelerate from 0 to 100 miles per hour in about 7 seconds, tearing down an 800 foot straightaway before rapidly angling straight upward. Superman's vehicles made it about 328 feet up the vertical tower, staring straight up at an anti-gravity Superman for over 6 seconds of sustained weightlessness, before plummeting back down. (In 2011, the cars' directions were reversed, leading to the backwards Superman: Escape from Krypton you'll see in the official POV below.)

Technically Superman: The Escape was the first coaster with a drop of over 300 feet... but in the world of coaster records, "shuttle coasters" (coasters that reverse somewhere along their course and return to the start point) tend to get an asterisk. Because it isn't a "full circuit" roller coaster, Superman isn't considered a "gigacoaster." At least according to that caveat, the first true giga coaster debuted three years later...

Famously the first park to break the 100-foot (Gemini), 200-foot (Magnum XL-200), and eventually, 400-foot (Top Thrill Dragster) full circuit height barrier, there could be no park but Ohio's Cedar Point to open the world's first gigacoaster. Easily one of the most legendary and iconic roller coasters on Earth, Millennium Force was indeed a harbinger of the 21st century, with its blazing blue track and its parabolic hills set against Lake Erie.

For coaster enthusiasts, Millennium Force is a "bucket list" experience; a landmark coaster worth traveling for. Even twenty years later, it's also one-of-a-kind. (Intamin has only built one other gigacoaster, and it's a whole different breed.) The ride is forceful, yet graceful. It's sleek and stunning, arcing over airtime hills, weaving through curving tunnels, and blasting across "Millennium Island." By time Millennium Force races past queueing guests, travels through a final banked turn, and aligns with the brakes, it feels like it hasn't lost even a hint of its 93 mile per hour top speed.

Typical for manufacturer Intamin, there's also something innovative (and more to the point, temperamental) about Millennium Force: in lieu of a traditional chain lift with its clicking anti-rollbacks providing a leisurely climb, the ride uses an elevator cable-based lift. The cable latches onto the train while it's in the station and pulls it up the lift hill in a brisk 30 seconds (that's 10 feet per second), providing riders a view of Canada across the lake on a clear day before pulling them right over the top without a moment to sweat it out.

Literally opened just a few months after Millennium Force, the world's second full-circuit gigacoaster opened at Nagashima Spa Land in Japan in August 2000 – the "Year of the Dragon." Steel Dragon 2000 was manufactured by Morgan, a coaster manufacturer whose modest 8-coaster collection includes a number of "megacoasters" (100 - 199 feet) and "hypercoasters" (200 - 299 feet).

To that end, Steel Dragon 2000 looks and feels like a Morgan or Arrow hypercoaster – think, Steel Force at Dorney Park, Steel Eel at SeaWorld San Antonio, or the Big One at Black Pool Pleasure Beach in the U.K. Ironically, the ride looks like a sister of Cedar Point's own Magnum XL-200.

That makes it a very interesting study for coaster enthusiasts, since it reaches a distinctly 21st century height, but with a predominantly late '80s / early '90s coaster manufacturer at the helm. And given that its two-chain lift hill takes nearly three times as long as Millennium Force's, it also shows the operational bonus provided by the elevator lift system! With elements of an "out and back," bunny-hill hyper design and swooping turns, its layout comes in at a whopping 8,133 feet – the longest roller coaster in the world, and it isn't even close.

After Cedar Fair (thrill-focused owners of Cedar Point) acquired the five Paramount Parks in 2007, they quickly swept away any lingering movie references, then set out to rebuild the parks in their own image: namely, coasters. At most of the former Paramount Parks, that took the form of an army of tried-and-true hypercoasters by reliable Swiss manufacturer B&M, with their easy-going, crowd-pleasing, out-and-back layouts of joyful airtime hills (see, Diamonback at Kings Island, Behemoth at Canada's Wonderland, and Intimidator – named for NASCAR racing legend Dale Earnhardt Jr. – at Carowinds).

For whatever reason, Kings Dominion in Virginia skipped right over the high-capacity, medium-intensity splendor of B&M and headed right for the big guns. Intimidator 305 was the second (and to date, final) of Intamin's gigacoaster era that began with Millennium Force. But quite unlike its powerful-yet-graceful Ohio sister, Intimidator is often cited as among the most intense roller coasters on Earth. Best understood by coaster aficionados as a fusion of Millennium Force and Cedar Point's bucking, weaving, slaloming Maverick, Intimidator is a force to be reckoned with... literally.

Though the coaster's first hill and 300 foot drop look a lot like Millennium's, instead of then rising into an overbanked turn and burning off some of that tremendous speed in a course of airtime hills and rising turns, Intimidator infamously accelerates into a gargantuan, ground-level helix, hops over a single airtime hill, then sticks low, charging at tear-jerking speed through wild, twisting, ground-level turns.

So incredibly forceful was the ride that even the most thrill-tested guests experienced "gray-outs" from the G-force, with frequent outright blackouts cited. We're talking about a ride that was ultra-intense. So much so that shortly after it opened, magnetic brakes were installed down the length of its signature first drop, pulling back on the train and reducing its top speed by a reported 20 miles per hour just to reduce the intensity of the first turnaround, with staggered magnetic brakes through the rest of the ride's track to lower its gravity.

Over the ride's first off-season (the winter of 2010 - 2011), that initial helix was completely reprofiled into a more gradual rising turn. Still, the ride's low elevation, high-speed course of dramatic movements and unexpected directional changes makes it one of the most intense coaster experiences to this day, leaving even the hungriest of thrill seekers with butterflies before boarding.

(Intamin's boundary-pushing similarly saw an entire section of Maverick's track removed and replaced before the ride's opening due to higher-than-anticipated forces. In 2010 – the same year Intimidator opened – an Intamin-made water ride at Cedar Point malfunctioned, trapping seven passengers underwater, upside down, in over-the-shoulder restraints. Surely it's not a coincidence that Cedar Fair hasn't worked with the company since. Even for Cedar Point, breaking records isn't worth it...)