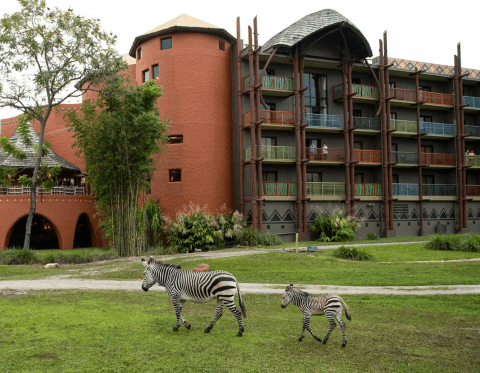 It’s ironic that one of Disney’s best resorts is also one of their most ambitious to date—and no, we are not talking about Star Wars: Galactic Starcruiser.

When most people think of Walt Disney World resorts, we think of Disney’s Magic Kingdom resorts—places like The Contemporary, Polynesian Resort, or Grand Floridian. Known for their impressive theming, these resorts ooze Disney magic. Also frequently considered are Disney’s Epcot resorts thanks to their classy theming and easy access to both Epcot and Disney’s Hollywood Studios.

Though I’m late to the party, I may have discovered a new favorite… and I can’t believe it took me this long to visit what might be Disney’s best overall resort.

Disney’s Animal Kingdom Lodge opened in 2001 as Disney’s only resort situated distinctly close to Disney’s Animal Kingdom. While all of Disney’s resorts hold unique characteristics and amazing theming, this new resort aimed to fulfill one of Walt Disney’s dreams in a fresh way: to allow Disney guests to get up close to the world’s animal’s not just in parks, but in a resort environment.

Divided into two parts—Jambo House, the original resort building, and Kidani Village, a Disney Vacation Club Villa expansion added in 2009—Animal Kingdom Lodge places guests right in the center of a series of sprawling savannahs rich with African wildlife. Guests visiting might see giraffes, African cattle, zebra, antelope, impala, kudu, wildebeest, or a wide range of birds like Marabou storks, ostrich, hornbills, African geese, cranes, and pelicans. Guests can either visit these animals by exploring the resort grounds, or by staying in a savannah view room, placing the animal’s grassy habitat right outside your window. It was an ambitious venture, but it has proven one of Disney most successful resort concepts.

We recently had the pleasure of staying for the first time at Disney’s Animal Kingdom Lodge, in a 2 Bedroom Villa with a Savannah View at Kidani Village. How did Animal Kingdom Lodge measure up to some of Disney’s other top contender resorts? Did the experience match the hype?

1. The theming is incredible

Like much of its namesake park, Animal Kingdom Lodge is a celebration of all things Africa. Having actually visited central Africa before, I can safely say they did an excellent job capturing the spirit of this diverse and beautiful continent.

From the moment you drive up to Animal Kingdom Lodge, you are transported to another world. Like Disney’s many other resorts, theming is king, and Animal Kingdom Lodge immediately invites guests into a world both cozy and rife with opportunities for adventure.

Designers and Imagineers paid extreme attention to detail throughout the resort. The resort exterior is designed to make the space feel more intimate, less sprawling than other Disney resorts. Lighting is subdued to give the distinct feel of illumination available in an African safari lodge. Patterns and designs marking the decor were inspired directly by those found in African villages, and much of the wooden furniture was crafted in African countries like Zimbabwe. Art is found in abundance, a Maasai rope bridge crosses the lobby, and striking water features both inside the lobby and throughout the grounds give a distinct feel of life and beauty.

2. It’s all about the animals

There is no question that the animals are the chief attraction at Animal Kingdom Lodge. Even before ever staying there, we visited the resort many times to explore the grounds and watch the animals.

Each of the resort’s animal residents are cared for meticulously by a team of caretakers, veterinarians, and specialists, including regular health checks and enrichment activities. Particular care was given during the resort’s design to make each savannah feel like a natural and welcoming environment for the animals, where they would each have a good amount of freedom to roam.

How about the location?