SCRAPPED...Animal Kingdom Attractions That Never Saw The Light of Day 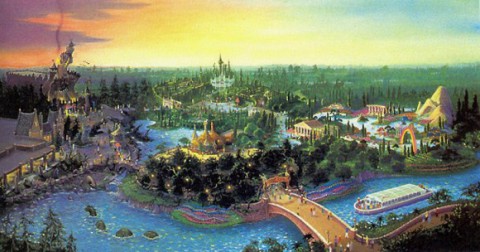 In the 1990's, when Animal Kingdom was first being developed, there were plans for a land of mystical creatures called Beastly Kingdom. Beastly Kingdom was to sit where Pandora- Land of AVATAR currently lies. This land would have two “realms”: the good and the evil. There were attractions planned for each of the realms, and a restaurant called Loch Ness Landing. Dragon Tower would have dominated the evil realm. The good realm would have housed Quest for the Unicorn and Fantasia Gardens.

Dragon Tower would have been the E-Ticket attraction of the land and featured a foreboding ruined castle. This ride would have included bat characters that would have led riders on a wild roller coaster adventure to steal treasure. The ride would eventually lead to a terrifying encounter with a greedy fire-breathing dragon who was guarding the treasure. The concept of the ride may have influenced another Animal Kingdom roller coaster with a similar encounter with a Yeti.

Sadly, due to financial constraints after Disneyland Paris failed to perform, Beastly Kingdom was scrapped in favor of Dinoland USA.  Imagineers that had worked on Dragon Tower and were laid-off eventually brought their ideas to another well-known IP-heavy theme park in Orlando (or so the story goes). This led to the now-extinct Dueling Dragons (and later Dragon Challenge) roller coaster at Universal’s Islands of Adventure.

Dueling Dragons sat in a land called The Lost Continent. The land also featured a ride called The Flying Unicorn which seems eerily similar to Quest for the Unicorn, but you can be the judge of that. The land was intended for the Beastly Kingdom was instead turned into Camp Minnie-Mickey which was supposed to be temporary until Disney could finally include the intended Beastly Kindgom. However, it remained there until it was eventually developed into Pandora- World of AVATAR, and the idea of Beastly Kingdom was scrapped forever. Fictional creatures did eventually make their way to Animal Kingdom later in the form of both the Yeti in Expedition Everest and the creatures native to Pandora.

Because Beastly Kingdom was still intended to eventually come to Animal Kingdom, there are still remnants  of this lost land and its abandoned attractions found all over Animal Kingdom.

The first one you probably have noticed is the dragon in the Animal Kingdom logo, and on the entrance to the park. If you have parked at Animal Kingdom, you may have even parked in the Unicorn section of the lot. Before its demolition, Camp Minnie-Mickey also featured a dragon-shaped fountain. Because Beastly Kingdom is no longer planned for Animal Kingdom, these remnants serve as fun "Easter eggs" for what might have been.

Would you loved to have seen these attractions at Animal Kingdom?