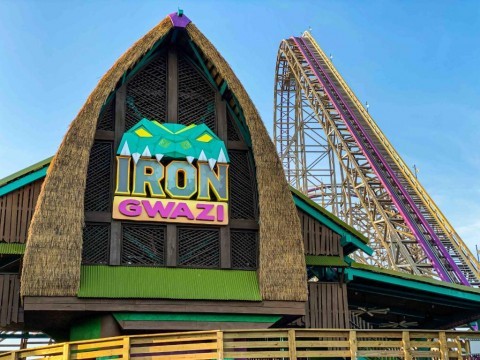 Nearly three years have passed since Busch Gardens Tampa’s announcement of their Rocky Mountain Construction recreation of wooden coaster Gwazi. In that time, supports have been replaced, purple track has been laid, test runs have been completed, and a flurry of rumors have passed from ear to ear. The record breaking coaster, which could have been seen standing but not operating for months, finally opens to the public next month.

Theme Park Tourist got to head out to Tampa to get an early preview on this behemoth of an attraction, and let me tell you: If you think this coaster is overrated, it isn’t. If you doubt whether it’ll live up to the hype, it will. If you’re wondering whether this coaster is enough to make the trip down to Tampa, it is. 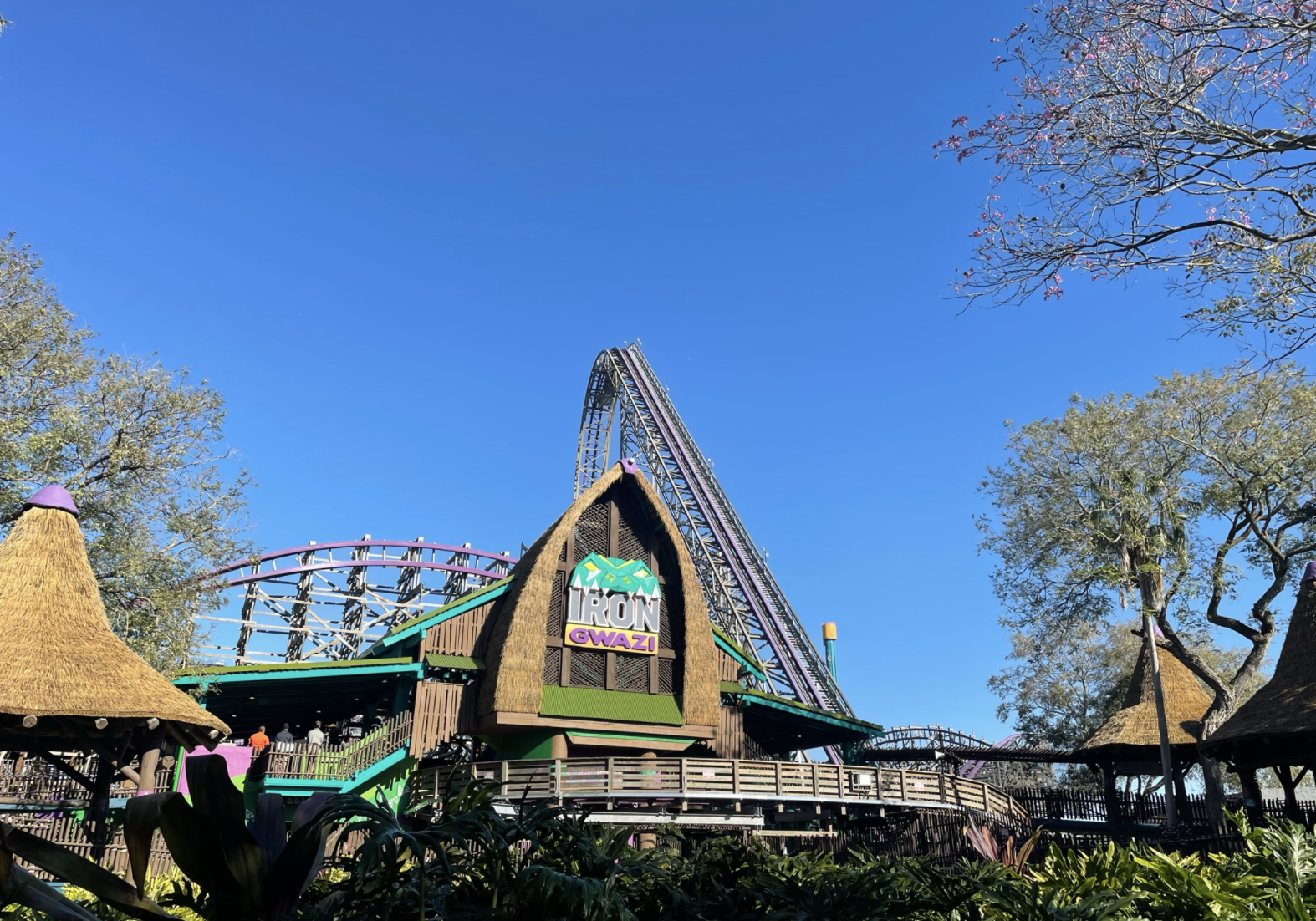 Iron Gwazi will open as the world’s fastest and steepest hybrid coaster, clocking in at 206 feet and a top speed of 76 miles per hour. The layout, while shorter than American competitor Steel Vengeance, is expertly-paced and never gives you a moment to breathe. SPOILER ALERT: This review has spoilers for Iron Gwazi. 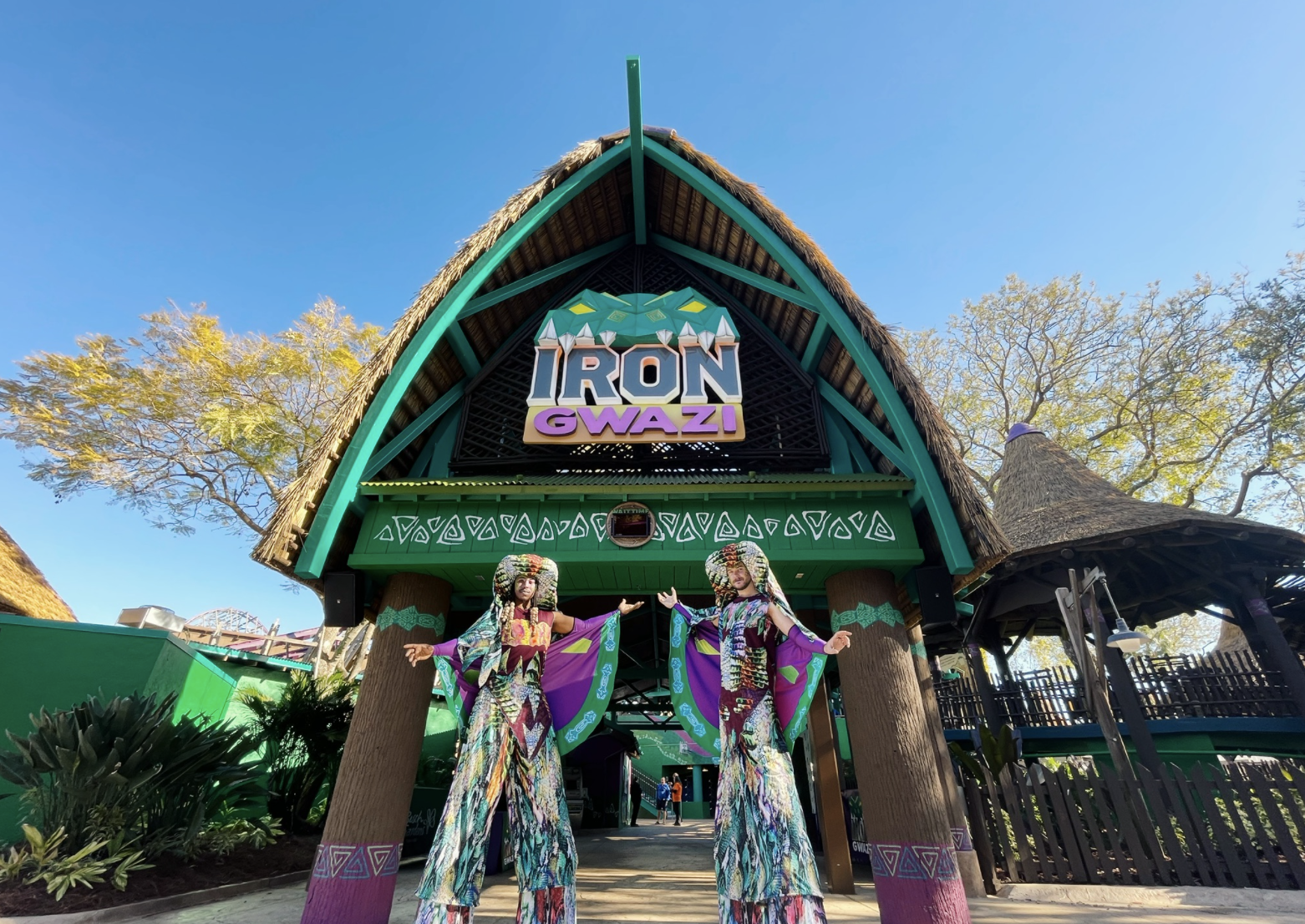 Your Iron Gwazi experience will begin with a walk into the attraction’s refurbished entry area. Here you can place your belongings in lockers and find your way to the queue. This queue line gets you nice and close to Iron Gwazi’s pristine track, and you’ll get some great shots of the ride’s 206-foot lift hill while waiting on the bridge to the station.

After a few switchbacks, riders separate into rows. These cars are equipped with zipper pouches attached to each seat. Save for slightly affecting throughput, I do not know why every coaster in the country doesn't have this option. These pouches eliminate the need for lockers or bins for your keys, phone, and smaller items. 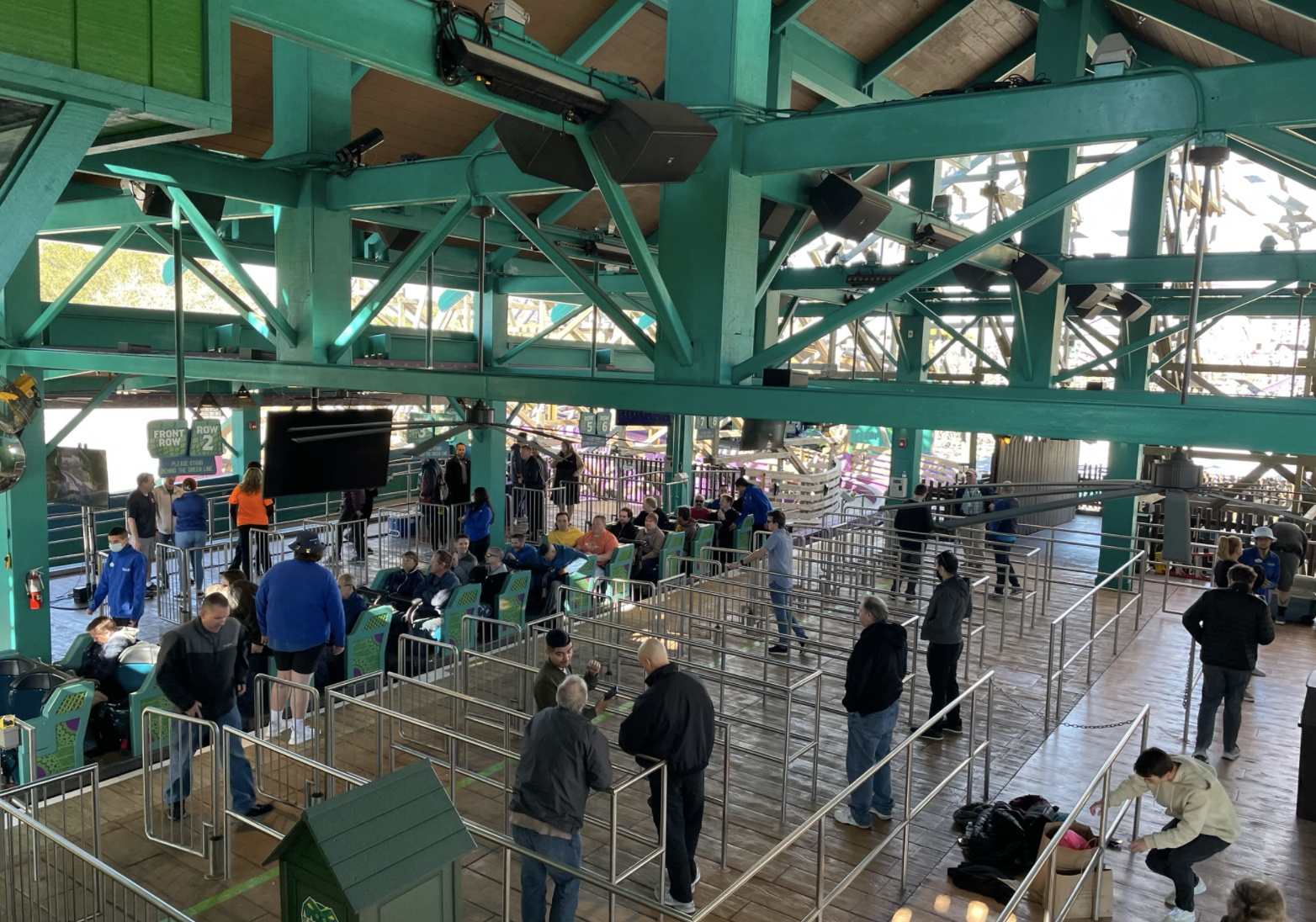 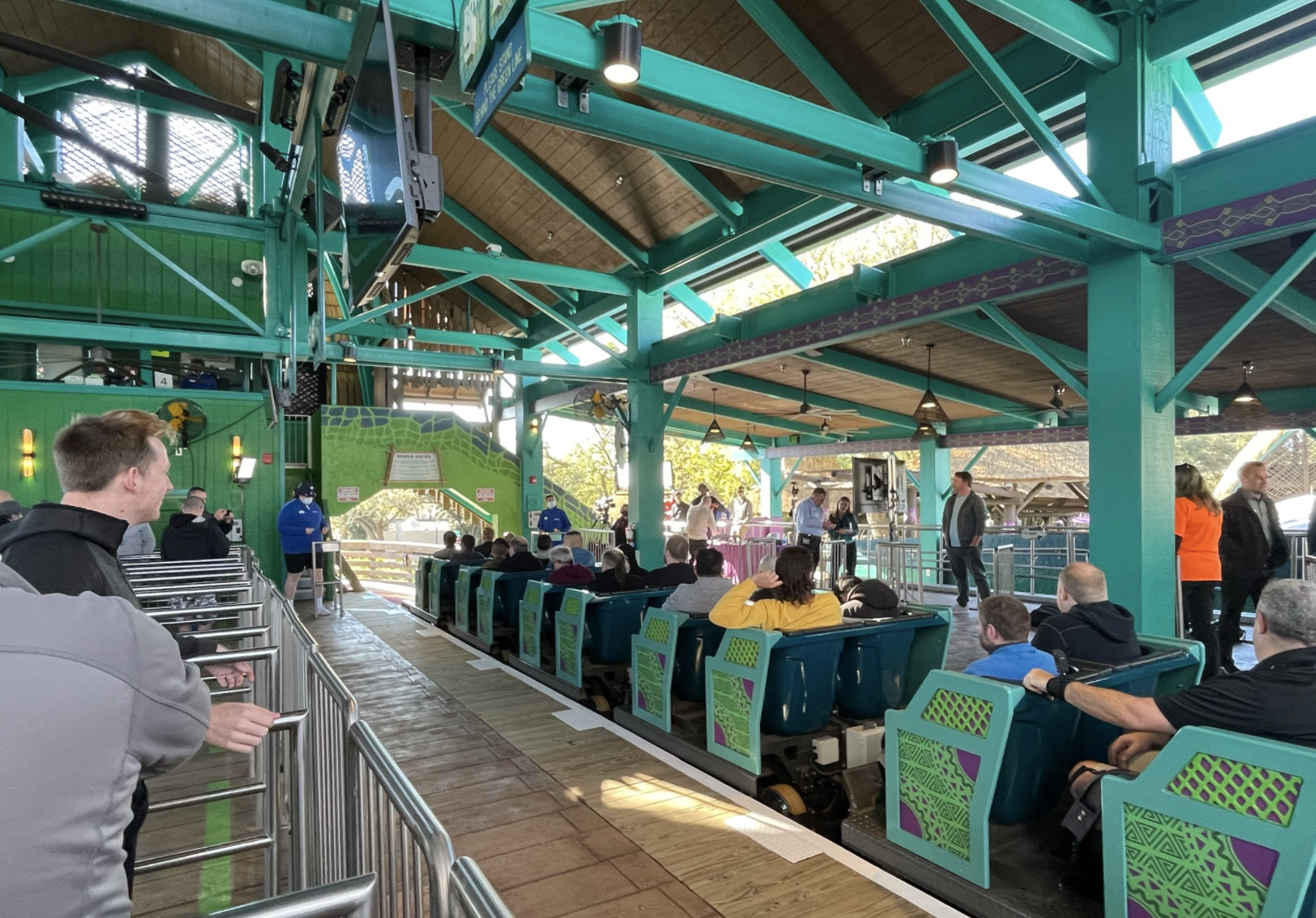 Though the front row experience is nearly flawless and some may disagree, this is a back row ride. In the back of the train, you’ll get airtime before you even ascend the lift hill when you’re hauled down the small dip out of the station.

On our preview day, the train crested slowly, slowly, over the top of the lift hill, and while the front row will experience vertical-facing anticipation that rivals SheiKra, the back row gets dragged over quickly—both great experiences, but different experiences. I was thrown from my seat almost every ride, more so in the afternoon as the track heated up. I felt as though I was standing fully upright on a ride or two.

The ride pops right back up into a banked airtime hill that immediately clues you in that yes, this ride rivals even Steel Vengeance. This moment pulls some great positive Gs, and had me graying out every ride. The coaster has three inversions, one of which being the loosely-named “Death Roll,” which is essentially a long, steep drop with a barrel roll in the middle of it. This element is one of my favorite moments of the ride, though there’s no ailment an RMC zero-G stall can’t heal.

The airtime in this ride is relentless. Though never painful, ten rides on Iron Gwazi did earn me some bruises on my thighs and shins, where I’d been pushed into my restraints. This ride will toss you around—up, down, left, and right—and has some of my favorite airtime I've ever experienced, including one shocking moment of negative Gs in the back half of the ride.Though the larger elements are placed in the beginning of this layout, don’t count out the second half—those bunny hops and banked hills will keep you entertained from start to finish. 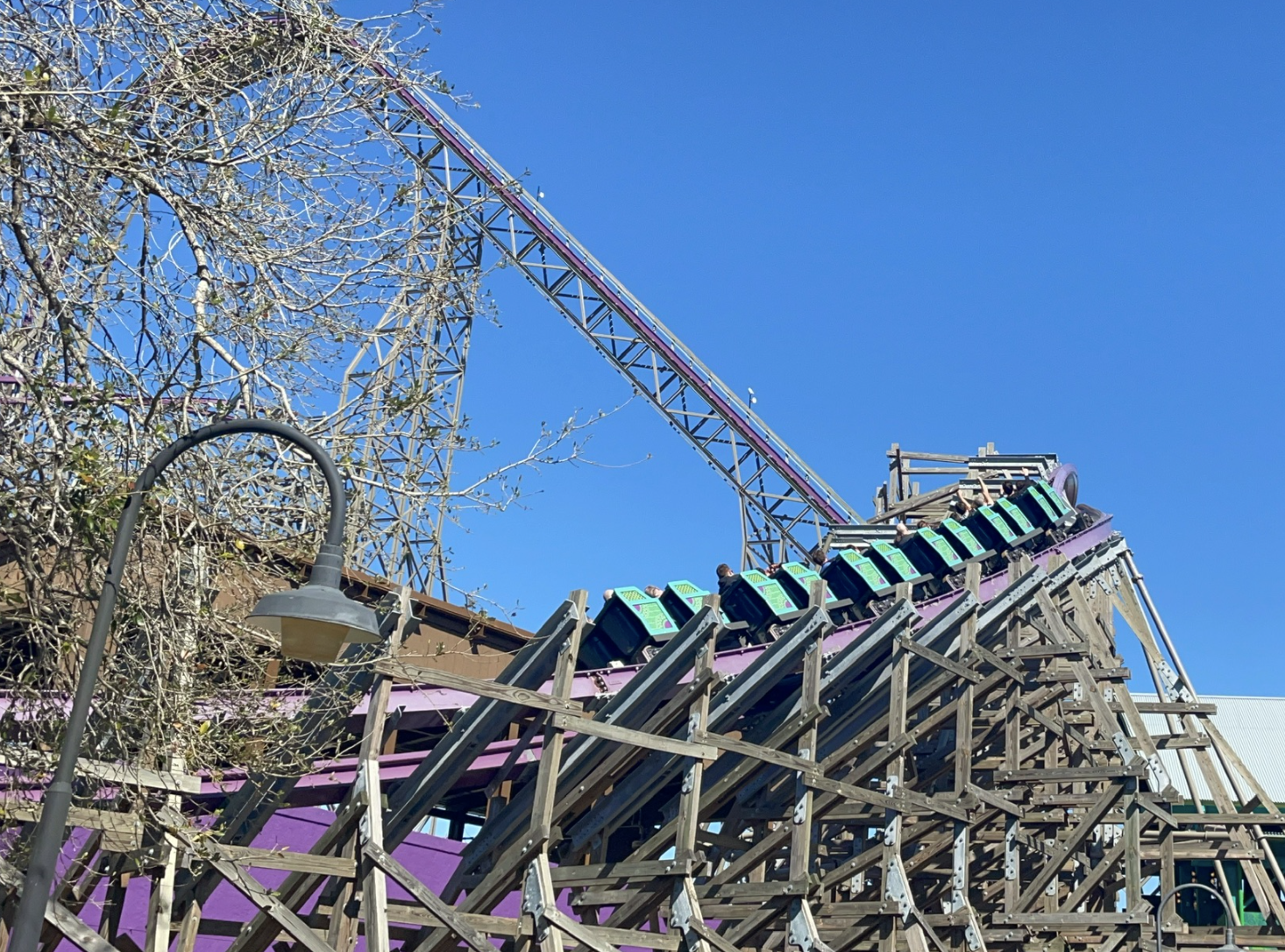 Iron Gwazi’s pacing is even better than you’d expect from an RMC (and that’s already a pretty darn high bar to set). Needless to say, that brake run hits hard. Keep an eye out on the right side of the brake run for remnants of Gwazi’s feline-inspired past.

However, it's not just on the track that Iron Gwazi impresses...