Disney's Best Buffets Are Back at Walt Disney World. When Will Other Favorites Return? 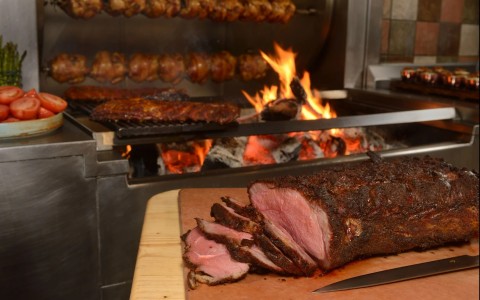 Food-lovers, rejoice—buffets are making a comeback at Walt Disney World!

Buffets have long been a mainstay experience at the Most Magical Place on Earth--that changed dramatically with the arrival of the COVID-19 pandemic, and not just at Disney parks. The return of buffets to restaurants around the world has long been a delicate issue, one Disney has had to navigate carefully. While many Disney dining locations switched over to a family-style menu during the pandemic, others closed entirely and have not yet reopened.

Guests have largely had mixed reactions to the “family style” switch at many former Disney buffet locations. On one hand, family style dining has definitely offered an improved option for reducing transmission of germs. The problem, however, is the shift has meant Disney has had to limit the once-expansive menus of their buffet restaurants, focusing only on the most popular dishes. This has proven a bit of a bummer for guests who had specific favorites at buffets, and it also can result in a lot of food wasted.

Fortunately, full buffets have started a steady return to Walt Disney World, and some are better than ever. Curious about the status of your favorite Disney buffet? Here’s what we’ve found so far...

Boma remains the unsung gem of Disney’s buffet choices, standing out thanks to its vibrant selection of African delights. While finicky palettes can still find familiar favorites like roasted beef tenderloin, potatoes, and an incredible selection of breads, exotic flavors are the name of the game at Boma. Durban chicken, Senegalese salmon, lamb bobotie, ox tail soup, Tunisian couscous, and delicious chakalaka are just a few of the incredible options to try here. Their dessert selection also remains exceptional (and yes, Zebra Domes are back).

If you enjoy a wide range of flavors and trying new things, Boma remains one of the top dining experiences at Walt Disney World, and we are ecstatic to see this exceptional buffet back.

Boma isn’t the only option for African food fans. Not far away over in Disney’s Animal Kingdom, Tusker House has long been known as another excellent choice for exotic Disney dining, pairing a selection of international cuisine with visits from a whole cast of Disney classic characters. The menu at Tusker House has long carried a number of similarities to Boma, with a few differences in food options.

At this stage, Tusker House has not reopened its buffet, and it remains uncertain if it is going to any time soon. Like many former Disney buffets, Tusker House has switched over to a family style model, with a menu limited to bread and salad service, a selection of popular entrees like Moroccan-spiced beef, roasted herb chicken, Berber pork, and Cape Malay Green Curry Shrimp, and a dessert plate. While this isn’t a terrible selection, it falls far short of the restaurant’s normal expansive menu.

If character dining is your primary focus, Tusker House remains a good option for a unique modified character dining experience at Walt Disney World. For fans of the food, however, you are probably better off making a reservation at Boma if you want the full experience of African flavors.

Located at Disney’s Grand Floridian, 1900 Park Fare has long been celebrated as one of Disney’s best breakfast buffets and character dining experiences. The location was particularly loved by Disney fans who wanted an experience like Crystal Palace with the upgrades of higher quality food, a beautiful setting, and interaction with unique characters.

Unfortunately, 1900 Park Fare remains one of Disney’s ongoing closures—while the restaurant was popular, it has yet to return as a priority among Disney’s dining options. While it is possible it could reopen this year, it seems like Disney is prioritizing other locations first since character dining remains complex at best.

It is also worth taking a moment to mention another popular princess-dining mainstay at Walt Disney World—Akershus Royal Banquet Hall over at Epcot’s Norway pavilion. Home to one of Disney’s best princess breakfasts, Akershus has remained closed throughout the pandemic except as a relaxation lounge and multi-purpose space. We are admittedly surprised this one has not returned yet due to the unique flavors and experience it offers. While there has been no news of a reopening yet, we are hopeful to hear some sort of update from this location soon.

If there is a second buffet we could not wait for Disney to bring back, it was Epcot’s Biergarten. This German dining extravaganza has held high marks as one of Disney’s best themed dining experiences for decades, with food so good, even my German-born Oma approved.

Biergarten was one of the first Disney buffets to reopen in the midst of the pandemic with a family-style menu. While the choices weren’t terrible, I’ll admit, I found the experience depressing compared to the smorgasbord of delights available with the normal buffet—a rich experience boiled down to the easiest sells, with some of the restaurant’s most unique options nowhere to be found.

We are thrilled to see the Biergarten back in its former glory with a full buffet, complete with many of the old missing favorites restored. If you enjoy rich flavors and hearty food, this remains one of our top recommendations at Walt Disney World.

But what about for fish lovers?...