What a REAL Star Wars Galactic Starcruiser Should Look Like 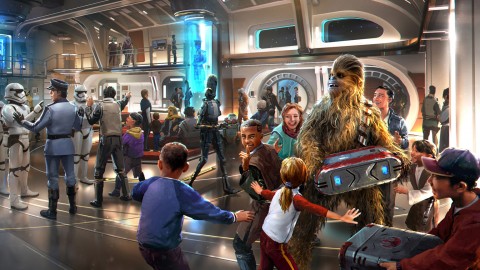 Unless you've been spending the last few months hiding in a Sarlacc pit, you'll know that the response to the promotional material for Star Wars: Galactic Starcruiser at Walt Disney World has been so negative that it rivals that of the widely-panned Star Wars sequel trilogy!

But then what's Star Wars without a little controversy these days? Nevertheless, the criticism has been overwhelming, and is largely pointed at the two teaser trailers for the Star Wars-themed hotel that will soon be docking near Star Wars: Galaxy's Edge at Disney's Hollywood Studios.

And while Star Wars fans are infamous for being a hard-to-please bunch, we think that, on this occasion, much like the backlash to sequel trilogy's Star Wars Episode VIII: The Last Jedi (2017) and Star Wars Episode IX: The Rise of Skywalker (2019) faced, they actually have a point...

While the initial concept art for the hotel experience looked promising, boasting many areas throughout the 'Halcyon' bustling with families and creatures from the faraway galaxy, the two trailers leaves a lot to be desired, and ultimately feels like anything but Star Wars.

So things aren't looking great for Star Wars: Galactic Starcruiser, which means that Disney is likely acting fast to make some changes before it launches in March of this year. Or perhaps they're being stubborn and sticking to their plasma cannons on this one!

However, we don't expect that they'll make any significant changes in that time, but at the very least, they might wish to review those truly staggering price tags, which will set you back a few thousand galactic credits per night (and by galactic credits, we do mean real money).

But rather than dwell on all the negatives, we've decided to imagine what a real Star Wars: Galactic Starcruiser would look like, or rather what it should look like. So how would we do things differently? Well, let's address all the issues with the upcoming experience.

The biggest problem with Star Wars: Galactic Starcruiser are the aesthetics. Despite being a multi-billion dollar franchise, the two teasers we've had, look surprisingly cheap, especially for a hotel that charges $3,000 per night. As such, we'd give the Halcyon's interior a huge overhaul.

Currently, it looks pretty stock and generic, and not even in a stock-and-generic Star Wars way. In fact, that would be much better than what we're getting, so why not give the Halcyon those iconic white-walled corridors of the Imperial ships, and fill them with stormtroopers.

We understand that Disney has created an original Star Wars experience, but sometimes, less is more, and keeping things simple, especially where Star Wars is concerned, is almost a guaranteed win (just take The Mandalorian, for example!).

It wouldn't even need to be an Imperial setting, and we appreciate Disney's efforts to build something unique, even if it currently doesn't look all that great. An Imperial setting would mean an Imperial theme, in which case Disney would need to commit to this throughout the rest of the experience. But then at this rate, we're sure guests would rather stay on the Death Star!

The Last Jedi (which I adored, and I'm a massive, obsessive Star Wars fan) wasn't "torn apart by critics" but was actually quite beloved. It had an 84 on Metacritic.

Note that this is higher than any other Star Wars movie except the original Ep. IV: A New Hope (which rates a 90). I'll take all my Star Wars stories in the TLJ time frame any day, compared with most of the other options out there.