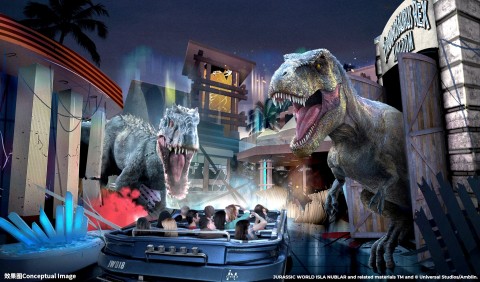 The ogre is dead. Long live the ass next door.

With the alternately memorialized and memed closure of Shrek 4-D - as well as the altogether less noticed closure of Fear Factor Live - Universal Studios Florida is on the verge of its next major transformation. As goes the original park, so goes the resort. When Islands of Adventure opened in 1999, Men in Black: Alien Attack chased it the following year in an effort to steal back a little thunder from the shinier, newer neighbor. With Epic Universe looming on the blurry horizon - now confirmed to be opening ready for Summer 2025 - there’s not much time to get the gears turning for similar reclamation projects on either side of that grand opening.

In other words, there’s never been a better time to play armchair entertainment designer. The forums have been on fire. Social media can’t play the guessing games fast enough. Artists are rendering. Insiders are hinting. Prognosticators are prognosticating. Whoever wins, so do the future guests. But which attractions will they be lining up for? That’s what this article intends to determine. The following additions, revisions, and expansions have been making the rounds, some for years now, as the next possible steps for the resort. Each will be judged based on the likelihood of their arrival and, if at all likely, when they might be arriving. Either way, it’s all hypotheticals of hypotheticals at this point so take everything with a grain of Margaritaville salt.

Fraser-Free Revenge of the Mummy

This one hurts just to type.

Revenge of the Mummy closed on January 7th for its longest refurbishment in years, lasting until sometime in late summer. Intrepid reporter Alicia Stella already ran down the permitting clues for Orlando Park Stop, deducing some replacements to the coaster infrastructure and an awning for the outdoor queue ironically similar to the one Kongfrontation used to have. But the only rumor powerful enough to break the theme park news orbit came earlier in December, when she dropped the bomb that Brendan Fraser might be surgically removed from the attraction.

It hurts more to type that this is about as likely as rumors get.

The preshow loop and ride-ending video have been playing for 17 years. The plot they bookend, of an oopsie-daisy actually haunted film set, is understood mostly by inertia at this point. If you haven’t watched that loop, good luck now, even if Universal does keep it around. It only plays in the “backstage” area just past the façade and, if you manage to visit between merchandisable holidays, the extended queue usually swallowed by a Tribute Store. Even hour-plus waits won’t see the whole thing, leaving the climactic death(?) of Brendan Fraser as a standard-definition non sequitur. Emphasis on “standard-definition.”

In audio-visual years, the media is ancient. There’s a reason those recent projector upgrades were immediately noticeable to even the least-trained eyes. Sadly, there’s only so much an HD upscaler can do.

It can’t, for instance, make a decades-dead franchise timely, millennial nostalgia notwithstanding. Rumors swirled in 2017 that Creative was actively developing an overhaul to keep the attraction in line with that year’s Tom Cruise-starring reboot. Poster art pressed along the ride’s exit ramp turned out to be the only public-facing evidence of any such project. But as inconsequential (and brief) as that tie-in was, it’s still enough smoke to call a fire - Universal just needs a reason.

If it can’t find one soon - and no Mummy reboot has been announced yet in the Blumhouse age of Universal Monsters - the best reason would be to make sure they don’t need a reason and nix the cinematic connection entirely. It already worked in Hollywood and Singapore. All it would take is a few remodeled rooms of the queue and a new finale, really the most tantalizing mystery here, to make Revenge of the Mummy Fraser-free.

Few celebrities have seen such a renaissance of public support and professional success in recent years than Brendan Fraser. He’s already worked with directors Danny Boyle and Steven Soderbergh. He’s currently working with Martin Scorsese and dipping his toe in cinematic universes with Batgirl. He is back and he is beloved. That’s more than enough for see-what-sticks scoop websites to report that Universal is considering him for a Mummy comeback. While that’s a shot in the dark until proven otherwise, the second coming of Brendan Fraser may be reason enough to keep him around the ride. Even if he does disappear from Revenge, as the smart money would indicate, he may just as quickly return, if only on a movie poster.

The 2019 opening of Jurassic World: The Ride kicked off an ongoing revitalization of Universal Studios Hollywood. Then came the pandemic-delayed Secret Life of Pets: Off the Leash! Next up is Super Nintendo World and Mario Kart. On the other side of that, rumors are already drawing crosshairs over Revenge of the Mummy.

One of those is a lock for Epic Universe. The other is perhaps the most-requested addition to Universal Orlando, to be discussed in further detail ahead. But what of the dinosaurs?

The River Adventure veterans have certainly seen better centuries. There’s only so much an annual refurbishment can handle. Ultrasaurus necks can only bend so far, for so long before hydraulic arthritis sets in. As for the carnivores, the spirit is still willing, but the actuators are weak. Such is the life cycle for mostly outdoor, permanently damp robots.

And that would be enough to double-time the makeover if Velocicoaster wasn’t right across the sidewalk.

Despite the obvious thematic unity of a Jurassic World land, the newest thrill ride on property ensures that, at least for a few years, nobody’s going to mind the difference. What the average guest would mind is if the only people-eating, people-pleasing classic within walking distance disappeared for any length of time until those crowds die down. And that’s not factoring in the amount of time, effort, and capital it would take to bring the Jurassic Park house style - thatched roofs and red timber - up to Jurassic World’s brutalist code. Universal also just spent hundreds of millions of dollars on one addition to this area. A second so quickly wouldn’t make sense, given some of the other, squeakier wheels around the Islands.

As it stands, both Orlando and Hollywood now have one-of-a-kind attractions based on Jurassic World. Converting the River Adventure to match would only hurt both coasts, on a global scale, even.

This article was the most enjoyable read I have had in a long time. Thank you. If you ever write a book, I'd be thrilled to purchase.