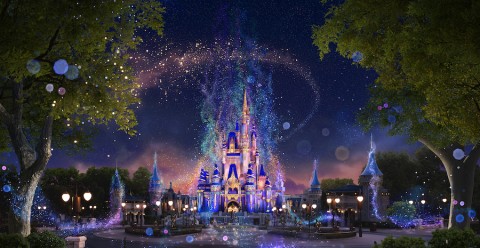 Ask any theme park fan and they'll tell you: a certain kind of magic falls across parks every evening. Once the sun sets, lands come alive. After dark, it seems that every theme park becomes more itself, with theatrical lighting casting a spell that can't be beat. But when you think of Disney and Universal's theme parks in Orlando – Magic Kingdom, Epcot, Hollywood Studios, Animal Kingdom, Universal Studios, and Islands of Adventure – which shine brightest in their after-dark glow?

Since it's impossible to compare those parks in one sitting, we decided to take a look at the structures meant to represent them: their "park icons." Each of Orlando's six park icons transforms after dark just like the parks they stand for. But the question is, of Orlando's six park icons, which shines brightest after dark? We'll use this countdown to share our opinions, but let us know in the comments – which icon do you think has the most impressive nighttime lighting package?

Standing sentinal at the entry of Universal's Islands of Adventure, the Pharos Lighthouse (a sort of fictionalized take on the Lighthouse of Alexandria) is a weirdly perfect park icon for an eclectic park filled with literary places. Built on a rocky outcropping of ancient red stone, the Pharos Lighthouse is secretly one of the most compelling and detailed structures in any stateside theme park when you get up close. It’s narratively brilliant, establishing Islands of Adventure as a place of exploration and fantasy; Port of Entry as a place we’ll depart from and return to en route to fantastic other-worlds.

It’s also operationally smart, drawing guests into (and out of) the park every evening with its real, rotating mirror and piercing white beam. Weirdly, though, beyond that beam, it’s practically unlit. There’s sort of a lazy spotlight on its south side halfway up, and maybe a diffused orange and purple flood-light very, very weakly aimed at its top and bottom half. The lighthouse’s crown also contains effects meant to simulate a burning fire. But its almost weird how not lit the Pharos Lighthouse is. After dark, it practically disappears, especially against the glow of CityWalk.

In some regards, it’s par for the course. As a whole, Universal is open far fewer hours after dark than Disney World, and even though Islands of Adventure is generally quite pretty at night, there's far more flood-lighting and spotlighting there than many Disney Parks. It would be really nice to see some #justicefortheIOAlighthouse, where a lighting engineer could transform it (and Port of Entry) into the beautifully saturated, warm, and vibrant icons they deserve to be!

In real lfe, the park icon of Universal Studios Florida can have the same issue as its sister, lit with just a sort of diffuse floodlight. But when the effect works right (and with sufficient photography skills, as above!), you can see what could be. The Studio Arch (modeled after the art deco entries to Golden Age production facilities in Hollywood) can be absolutely beautiful, with a golden glow that radiates up its archways and blue halos around art deco accents.

Frankly, the Pharos Lighthouse could take a lesson from this lighting scheme. Especially at Universal Orlando – whose unique, master-planned layout essentially places the Lighthouse and Studio Arch at opposite ends of CityWalk, beckoning guests to choose between them – two punchy, bright, glowing, ethereal icons would complement each other beautifully.

Most of Walt Disney World's 50th Anniversary celebration seems to have forgotten to celebrate... y'know... Disney World. But one of the few park-focused plusses was that each of the resort's four park icons was “upgraded” with a new nighttime lighting and projection package. The so-called “Beacons of Magic” are meant to call guests back to “The Most Magical Celebration on Earth,” leaning into the promotion’s metallic, glittery, “EARidescent” color scheme of pinks, golds, blues, and purples. More “background animation” than “shows,” these Beacons of Magic are meant to set the mood and highlight each park’s icon.

Artists did a pretty nice job of bringing the Hollywood Tower Hotel to “life” using projection mapping (see the video, above). It’s covered in art deco embellishments, glowing golden downspouts, and misty waves of iridescence that dance across the exterior like lens flares. The glowing neon marquee gains pixie dust-like sparkles, and – coolest of all – projection mapping adds life to the hotel’s “rooms,” with a swinging jazz night at the “Tip Top Club” visible through upper floor side windows.

So why rank it the lowest of Disney's park icons? Frankly, the ride’s “regular” nighttime lighting (an otherworldly purple glow and a crackling, sparking green neon sign, above) was pretty close to Disney-After-Dark perfection. It would be nice to incorporate “did you see that or were my eyes playing tricks on me” projection into the hotel’s windows, or to have Twilight Zone style distortions of its architecture, but trying to paint the lightning-scarred, dilapidated hotel facade that house one of Disney’s scariest rides into a regal Beacon of Magic feels like a hard sell.

(To that end, it’s a total mystery why Disney is so intent on making the Twilight Zone Tower of Terror into Hollywood Studios’ park icon at all – basically, the equivalent of making the Haunted Mansion into Magic Kingdom’s identifier over the castle. After all, Hollywood Studios’ “Main Street” ends at the centrally-located Chinese Theater – a natural “castle-counterpart” that also happens to be a real, historic icon of the Golden Age of Hollywood… and where Star Wars premiered! The park’s Chinese Theater even received a new, golden, “Premiere night every night” lighting package in 2021… but the ruins of the Hollywood Tower Hotel held onto icon status. Lest we forget, Disney is so intent on not making the Chinese Theater the park icon, it once built a 120-foot tall hat in front of the building and deemed that the park icon instead.)