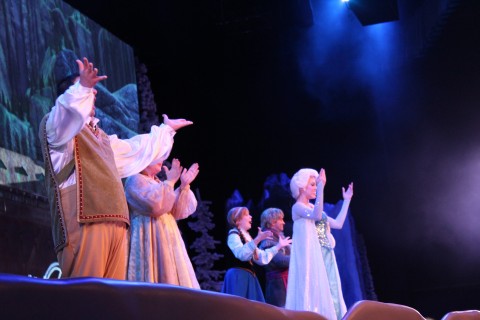 Walt Disney World has many incredible shows. They have permanent animatronic shows, live musicals, and even interactive character-driven shows that offer a different experience for each viewing. However, there are five IP’s (Intellectual Properties) that would make excellent shows at Walt Disney World.

You have likely heard of Encanto in the last month or so. The soundtrack is filled with hit after hit. “We Don’t Talk About Bruno” has even surpassed “Let It Go” as the biggest hit song from a Disney animated feature film. It is probably also stuck in your head. It is no surprise that this musical masterpiece tops our list of IP’s that would make great shows. A live Encanto stage show that allows guests to sing along with all the incredible songs would be a great fit. This could be done in the same style as For the First Time in Forever: A Frozen Sing-A-Long Celebration. A celebration of The Family Madrigal, if you will. It would surely be filled with laughs and if Disney can make it snow, isn’t it possible they could make flowers or butterflies rain down as well?

Coco is another Disney IP with incredible music. While Coco is finally seeing some representation in Mickey’s Philarmagic and the Disney Adventure Friends cavalcade at Magic Kindom, we think this just doesn’t do this IP justice. Obviously, Coco would fit in perfectly in the Mexico pavilion at EPCOT. A stage show for Coco could join Miguel and his family in celebrating Mexican culture while incorporating the songs from the movie in both English and Spanish. EPCOT doesn’t currently have any permanent live stage shows so it could be a welcome addition.

Big Hero 6 is not a musical, so this wouldn’t be the typical stage show that one might expect at a Disney park. Instead, Hiro, GoGo Tamogo, Wasabi, Honey Lemon, Fred, and Baymax would enchant guests with an impressive science exhibition. These scientists/superheroes would perform science experiments and showcase their robotics and tech breakthroughs live on stage.

Maybe they would even show off some of their superhero tech. Think science meets illusionists meets stunt show. That wouldn’t even be the best part. The show could be interactive! With audience participation and a life size Baymax animatronic that responds directly to guests. This would be a similar experience to Turtle Talk with Crush or Monsters Inc. Laugh Floor. It would also make for a different experience every time guests attend the show. It could work great in Tomorrowland at Magic Kingdom or the World Discovery neighborhood at EPCOT. Admit it, this is the show you didn’t know you needed.

Tangled and Rapunzel are grossly under-represented at Walt Disney World. Literally, they only gave the IP bathrooms! While they are the nicest bathrooms in Magic Kingdom, Tangled has a story that is easily abbreviated to accommodate a live show. The songs are also amazing. Can you imagine seeing “I Have a Dream” performed live on stage with a bunch of rowdy thugs? Magic Kingdom doesn’t currently have any actual live stage shows. A show like Tangled would be perfect for Fantasyland and would be a great addition to the parks already amazing show line up.

Princess and the Frog

While this IP will be getting its own ride, eventually, one ride doesn’t do this IP justice. Princess and the Frog is a celebration of jazz music and working hard to accomplish your dreams. Tiana has always been a character that children could look up to as a great example of how working hard to achieve your goals can pay off. She has also been the least represented princess at the Disney parks, and that just has to change. The New Orleans setting of the movie would make this IP a great addition to the American Adventure pavilion at EPCOT. Making it a dinner show and incorporating Tiana’s restaurant into the parks would be an even better way to bring this IP to the parks.

What are some IP’s that you wish would have a show at the Disney parks?