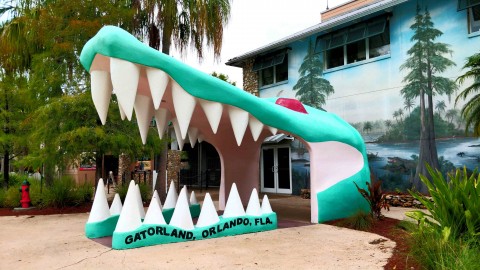 A new year means new vacations and new vacations mean...something different than they used to. Best laid plans from last fall now look like anything but. The ongoing pandemic, freshly re-accelerated by the omicron variant, is scorching the workforce. Airlines are cancelling flights because there aren’t enough uninfected workers to make them fly. On the ground, every possible public-facing business is wilting from the same heat. And that includes tourist attractions. Fewer and fewer employees are left to tell more and more guests to enjoy the rest of their day at Fill-in-the-Blank Park. It’s an unprecedented burnout too often ignored by consumers expecting a precedented vacation.

For the foreseeable future, some patience and a little compromise is going to have to cover the difference. There’s more to Central Florida than the clashing titans. Now that one of them has ended airport-to-resort transportation, there’s more reason than ever to see what else is out there, emphasis on the out. For anyone whose plane is still scheduled and hotel still booked, or even locals in the market for fresh air, here are six outdoor activities to beat the crowds and support small businesses at the same time.

All the way west on 192 and a little north lies a buried treasure, at least by Central Florida attraction standards. It’s not hard to spot the Showcase of Citrus - watch for King Kong on the north side and a tiger-striped monster truck schoolbus on the south - it’s just slightly outside the Kissimmee tourist ecosystem, 15 minutes from Walt Disney World and 35 from Universal Orlando. Not a bad drive and, ultimately, the seclusion is part of the appeal.

The Old Time Country Store, dignified with a corrugated roof marked “CITRUS,” belongs to a dying breed of gift shop. No mice in sight. No conspicuously familiar cauldrons for your coffee. There are plenty of tchotchkes for visitors of all ages to mess with on the drive home, but the selection is refreshingly local. Grow-your-own palm tree kits. Gator-foot backscratchers. Locally sourced snacks for every appetite - salsas, honey sticks, wines, etc. Every wall provides its own rusting history lesson, of antique orange juice advertisements and painted alligators spitting fire (a side effect of the house-brand hot sauce, of course). But shopping is only the tip of this folksy iceberg.

The Country Store doubles as a gateway to the Showcase’s 2,500-acre expanse. Just past it, visitors will find a gem mining operation, a petting zoo, a playground, a music stage, and a convenient means of climbing onto those aforementioned tiger-striped monster truck buses. Those brave enough to board can enjoy a surprisingly lengthy open-air tour of the grounds. The presentable view from US-27 quickly gives way to primordial swamp and cow-tended savannah. Drivers provide live entertainment with old Florida lore and Showcase trivia - if you’ve ever wondered what Disney’s Animal Kingdom does with all that manure, look no further.

And then, of course, there’s the citrus.

The Showcase grows over 50 varieties, all of them available for the picking. Lemons, tangerines, grapefruits, limes, sugar belles, and more types of orange than you could possibly name. No matter your pleasure, fruit is paid for by the pre-sized bag so any combination counts.

But if a 10-pound bag of navels is too daunting for your hotel room fridge, Showcase of Citrus offers a more convenient taste of Florida - the fresh-squeezed orange juice slushie. Not orange flavored. Not even orange juice flavored. It preserves that breakfast-table tang of the real deal because it is the real deal. And if you want to give Dole Whip a run for its money, spring for the creamsicle version, which mixes the slush with frozen yogurt. Are they world-famous as so many stickers around the property claim? Hard to say, but they certainly should be more famous.

Consider Showcase of Citrus a backwards oasis, a living, breathing place in a town full of places exhaustively made to appear living and breathing.

Check back in a few months and this recommendation should be more obvious. For now, Krush Brau Park is an intentionally kept secret.

Recent passersby on the east end of 192 might’ve noticed a conspicuously large parking lot full of shipping containers in front of a conspicuously large building adorned with a dry waterfall. More seasoned travelers might remember that waterfall, just past the Dollar Tree and just shy of Medieval Times, as the former entrance of Jungleland Zoo. Since the 1970s, when it opened as Alligatorland Safari Zoo, that conspicuously large parking lot was occupied by the largest man-made alligator in the world. Though another concrete crocodilian eventually took that crown, the Jungleland gator remained, eventually reasserting its might with a crushed Jeep in its jaws. That sight likely inspired more warm memories than the attraction behind it, which crumbled amid allegations of animal mistreatment and repeated inspection failures. The park, cages and all, was left intact after its 2002 closure, another highway ghost.

Krush Brau Park is paying its respects. All around the Festplatz tent, animatronic animals make their noises. When the new attraction is complete, there will be a petting zoo to complete the homage.

For now, Krush Brau is an easy, breezy German night out.

Oom-pah music beckons from the back left corner of the unmarked lot. Only on approach do the roars and growls join in with the band. Follow the party and you’ll find a little piece of Bavaria carved out of a sub-tropical swamp. Drink windows offer an impressive array of lagers, dunkels, and pilsners, with or without a boot to drink them out of. Food windows, serving an abbreviated menu for now, sell German favorites to-go.  Enormous pretzels. Three kinds of sausage. Pita-wrapped schitnizel. Oversized slices of Black Forest and German Chocolate cake.

There’s no better soundtrack to savor it by than a live German band. Cowbells. Accordions. Mile-long alphorns. Thunderous cries for “Prost!” Regulars of Epcot’s Biergarten buffet will recognize some of the performers and know some of the sing-alongs by heart. It’s a good time made great with the right crowd. There’s even a gift shop for any sudden cravings for lederhosen.

Right now, the Festplatz is open daily, with special events on specific nights. Check their website - KrushBrauPark.com - for a proper schedule.

It’s also worth checking to keep an eye on the transformation. When finished, Krush Brau Park will include a family-style restaurant, outbuilding eateries, live entertainment in outdoor theaters, playgrounds, and real, live animals in addition to the robotic kind. There’s no date for completion yet - global pandemics tend to get in the way - but it’s moving right along and already a neat way to spend an evening.