Closed for Storm: How a Hurricane Drowned Six Flags 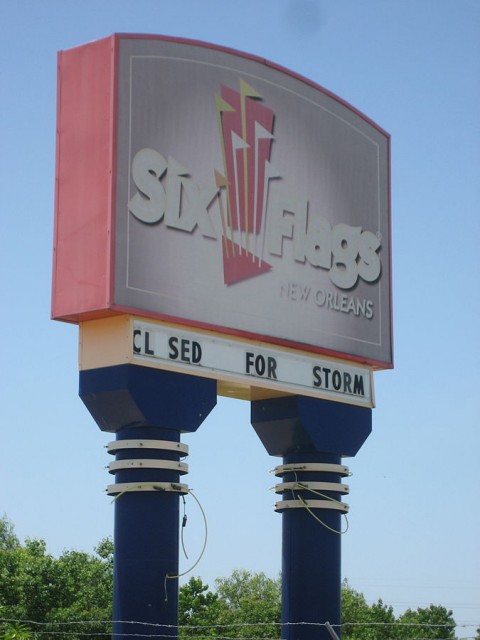 The year was 2005. In mid-August, Hurricane Katrina impacted New Orleans and the surrounding area, leaving devastation in its wake. Katrina reached Category 5 intensity at its peak and claimed the lives of over 1,500 people. In the aftermath, thousands of people were left without a home to return to and some flooded areas did not return to normal for weeks after.

One of the most iconic remnants of the destruction of Katrina still stands to this day–an abandoned theme park in New Orleans. At its peak, the park boasted an impressive twenty-seven rides including two water rides and four rollercoasters. Themed attractions based around Spongebob Squarepants and Batman were fan favorites, and the park featured multiple themed areas such as a DC comics area and a Looney Tunes land for children.

Six Flags New Orleans enjoyed a short five years of operation (two of which were under the original name of Jazzland) before the storm closed its doors permanently due to irreparable water damage and flooding. To this day, it sits abandoned–left to rot and empty aside from the alligators that quickly took up residence in the surrounding area. Since its closing, numerous films and TV shows have used the location as a set including big names such as Marvel’s Cloak & Dagger (2018-2019), Percy Jackson: Sea of Monsters (2013), and Jurassic World (2015).

In October of this year, however, plans were put into motion to demolish the existing structures and develop a new amusement park where Six Flags New Orleans once stood. The proposed project will include a hotel, water park, sports complex, warehouse, and travel center. The chosen developers under the project name Bayou Phoenix are optimistic about the future of the location that could create over seven hundred jobs for the local community.