Secrets of the Swan & Dolphin: Surprising Stories from Disney World's Most Unusual Hotels. 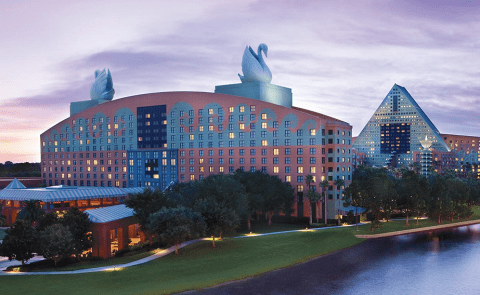 Some Walt Disney World hotels make you feel like you're down in ole' New Orleans strolling through bayous and mansions. Some take you to the grand seaside Victorian hotels of yesteryear. Some place you in the Caribbean for a sun-drenched vacation in a colorful village. But only one of Walt Disney World's hotels is a post-modern abstraction; a geometric icon of architecture and a divisive remnant of '90s design somehow elevated to timelessness.

Say what you will about The Walt Disney World Swan & Dolphin, but these two unusual sister resorts set around Crescent Lake near EPCOT are captivating; interesting; different. Today, we're taking a look at the Origin, Architecture, Legends, and Story behind the Swan and Dolphin. Hopefully by the end, whether you love or hate these two-of-a-kind resorts, you'll appreciate that Walt Disney World could use a little more of their kind of boldness today...

When then-new CEO Michael Eisner inherited planning for Walt Disney World in the mid-1980s, he saw a 40,000 acre property with limitless potential. Walt Disney World had certainly become the "Vacation Kingdom of the World" that Roy Disney had hoped... but more to the point, Disney had transformed the rest of Central Florida along with it. Many of Eisner's projects in the '80s – like Pleasure Island and the Disney-MGM Studios – clearly read as the company's attempts to outplay rivals who elbowed into the Mouse's crowds, like Church Street Station and Universal Studios. That's how the Swan and Dolphin came about, too.

Believe it or not, when Eisner arrived in 1984, Walt Disney World had only two hotels: the Polynesian Village and Contemporary, both of which dated back to the resort's 1971 opening! Recognizing the tremendous potential Disney had to own the hotel market in Central Florida, construction went into overtime. In 1988, Disney opened the Grand Floridian hotel on the Seven Seas Lagoon, and introduced a new, less-expensive, "Moderate" hotel – Disney's Caribbean Beach.

But even if Disney could capture more Central Florida guests with expanded hotel capacity, there was one crowd they needed more than any other: the convention crowd. Plenty of companies and organizations hosted conventions and seminars in Central Florida... they just weren't doing it in Disney World's dated, '70s facilities. Eisner would change that. Built around a custom-made Boardwalk of evening attractions, the "Convention Kingdom" would insulate professionals within their own sphere of Disney World, all while providing a back entrance into EPCOT for fine dining each evening.

When the New York-based real estate company Tishman got wind that Disney was courting external partners (architect Alan Lapidus and operator Marriott) to build and manage convention centers, they sued. (Tishman asserted that their role in the construction of EPCOT and two Lake Buena Vista hotels came with a multi-year exclusivity deal, preventing any other outside companies from building hotels on Disney property.) Ultimately, Disney and Tishman settled amicably, and Tishman did indeed take over the construction and operation of two of the "Convention Kingdom's" hotels...

But as the story goes, Michael Eisner wasn't content with the hotels Tishman planned and negotiated to bring on a world-renowned architect to do something bold...

But one of the most divisive architects on Disney's payroll in the era was Michael Graves. A longtime architect, artist, and designer, Grave's is an icon of post-modern architecture – an intentional rejection of the clean lines and austerity of the '60s and '70s.

Marked by whimsy, symmetry, and geometry, it's no surprise that Graves' style (and especially his work for Eisner's Walt Disney Company) is sometimes called "entertainment architecture." That made Graves the perfect person to bring to life two iconic hotels within Eisner's Convention Kingdom...

When asked by Disney historian Jim Korkis in 1997, Graves described how he was chosen for the project, saying, "Michael didn't like those tall, all-glass buildings. He referred to them as 'refrigerator boxes.' He wanted the architecture to tell a story." Even at first glance, the Swan & Dolphin do.

Why a swan and a dolphin to begin with? "I wanted creatures that were not part of the existing Disney mythology and hoped as a result they would then be developed further as Disney icons," Graves told Korkis. "[The dolphins] were inspired by the work of an Italian sculptor, Bernini [and his Fontana del Tritone]. Of course, there is one major change. Bernini's dolphins had mouths that curved downward and looked like they were frowning. Michael said that wasn't going to happen on Disney property so I curved the mouths upwards as if smiling."

The Swan is made up of a 12-story rectacular tower with a gently-curving roofline, with two 47-foot tall Swan statues (coming in at 60,000 pounds each) drifting atop. Two 9-story wings jut off toward Crescent Lake each adorned with a clamshell.

The entire property is bathed in a warm, sandy pink with teal, stylized, curving waves radiating out from its center and along the towers – the post-modern pop that gives Graves' work its whimsy. And between the two accessory towers, the Swan's main entrance from Crescent Lake is a stylized gazebo blanketed in billowing tents – an ode to beach life in the Sunshine State.

A causeway through the center of Crescent Lake connects the Swan to its sister, with rising seashell fountains and billowing water. With nearly twice as many rooms, the Dolphin's most striking feature is its 257-foot tall central triangular tower – a teal 'pyramid' rising from its 12-story rectangular core with 56-foot tall nautical dolphins on either side. Four 12-story wings branch from the core. Opposite the Swan's rolling waves, the Dolphin is covered in paintings of giant banana leaves, fanning out across its towers.

The spectacular Square Feet Tours offers a free, hour-long audio tour of the Swan & Dolphin that dives deep into Graves' intentions with the shapes and colors of the hotels, and even if modern refreshes have scrubbed the colors and textures of the '90s in favor of more modern, palatable patterns and clean lines, there's no denying that these two hotels stand out. And even if the postmodern masterpiece doesn't recreate a specific "place" like the Grand Californian or Wilderness Lodge, there is a story to explain the Swan and Dolphin... On the next page, we'll explore the lore created by Graves and discuss some famous rumors about these two hotels...

Hi Brian-thanks for the reference to Square Feet Tours and the link to walking tour of the Swan and Dolphin. I really need to update the tour now that the renovations have been completed. And I am blushing that you found the tour to be "spectacular". :-)

Bob, I sat down and listened to your audio tour from home when you recommended it to me on Twitter (@themeparklore), and it convinced me to move my next trip to the Swan! Fascinating stuff, and exactly the more architectural and historic deep dive I was hoping to find. I'm so thankful for your insight!