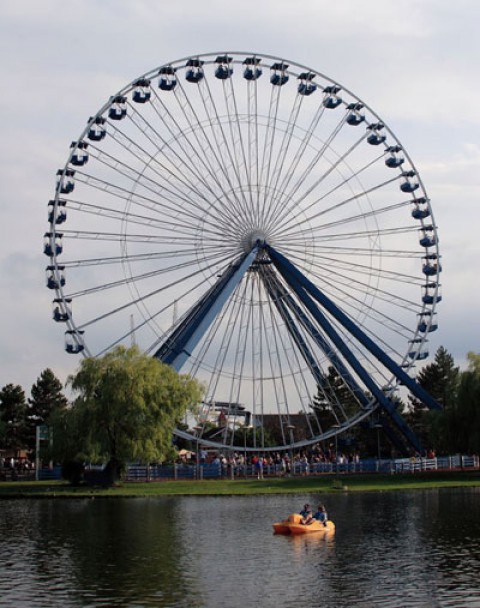 As with the roller coasters we mentioned in Rest in Pieces: 4 Roller Coasters That Shut Down Permanently in 2021, we are bidding several non-coaster attractions farewell in 2021.

The Moon Antique Cars at Six Flags St. Louis are also being retired. This historic antique car attraction originally opened in 1971 and delighted guests for 49 years. There has been no mention of what will be taking the classic ride’s place. Antique car rides tend to be popular at many theme parks. Many people still enjoy car rides like Tomorrowland Speedway, even when others call for their closure. Sadly, this was not enough to save the Moon Antique Cars.

In New York at Six Flags Darien Lake, two rides have closed this year. The Giant Wheel Ferris wheel was announced as a permanent closure this year. While no formal announcement was originally made, a sign sat outside the attraction noting its retirement earlier this year. It was originally built for the 1982 World’s Fair and stood 15 stories tall. The second attraction to close at Six Flags Darien Lake is Grizzly Run. Grizzly Run was a river rapids ride that originally opened in 1989. After spending the 2020 season closed, Grizzly Run started the 2021 season boarded up and fenced off. It wasn’t confirmed until May that the ride would not be reopening.

Last, we make a stop at Adventureland in Iowa to say goodbye to three attractions. Falling Star, a pendulum-style ride in which riders would swing side to side originally opened in 1989. Lighthouse was a spinning carnival-style ride that opened for the first time in 1974. Finally, Lady Luck, a roulette-themed spinning ride that opened in 1974 also closed this year.

Will you miss any of these classic rides?

I'm sorry to hear about the Sky Buckets at SFOG. Added to the park for the second season. I'm happy I rode them as often as I did. There is so little left of the original park I hope we are able to keep and maintain what little remains from 1967 when the park opened. I was 9 years old and attended the very first season! I love this park.

I was a ride mechanic in the late 80's at the Drain( Darien) Lake..one day...whislt greasing the Hub bearings of the Giant Wheel, I nearly fell 80' trying to escape the hornets stinging the hell out of me. Good Times.

Really sad to see the rides at Darien lake go. I only just went on the grizzly run a year or two ago, and it was really fun! I can't imagine what they're going to replace the Faris wheel with, it's such an awkward amount of space. I just hope it's a ride and not more places to spend a ton of money on food.

I will miss the Ferris Wheel at Darien Lake very much. It was always our traditional first ride in the park. The views from the top of it were outstanding and if you were lucky enough to get stopped at the top, you really had time to take in the view. Really sorry to see it go.

I cut six flags some slack because of covid..but Darien Lake is the poorest run park ive ever been with...and closing 2 major family attractions because you dont want to pay to maintain them...unexcuseble