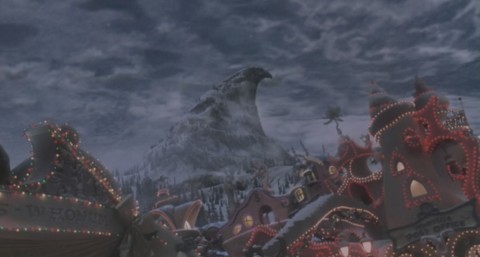 Over the last few years, the holidays have truly become Universal. The full-fledged Tribute Store. The dual-park Holiday Tree Hunt. The brand new Mistletoe Pines Village in CityWalk. The burgeoning cult of Earl the Squirrel. And that’s not counting the returning Macy’s-approved parade or Grinchmas. Universal Orlando Resort may not have a hard-ticketed Christmas party like the resort down the road, but with everything included with ordinary admission, it doesn’t really need one.

Then again, Universal’s post-Halloween celebrations have always been a little outside the box. One of the earliest festivities was a skit-and-song extravaganza starring the park’s early players, from the Ricardo clan to Fievel’s extended family. There was even a performance from the Orlando Bell-Ringing Choir (the Marx Brothers covered in jingle bells). Potential copyright infringements aside, that was the spirit - ring in the holidays by any means necessary. That meant trees on the roof rack of Ecto-1 and Delancey Street done up for Hanukkah.

The history of those Universal holidays, as loosely recounted last year, is even more slippery than that of Halloween Horror Nights. But across the resort’s 30-odd years of cheer, some traditions have left enough of a mark to consider reinstatement. These six festivities, some grand and others no more complicated than a little red felt, all deserve celebration anew.

Since the 2000 release of Ron Howard’s How The Grinch Stole Christmas, Seuss Landing has provided a convenient Christmas centerpiece for Islands of Adventure. In addition to the expected Jim Carrey impersonator, the cockeyed halls were decked with 35 wreathes, 55 stars, and eight soap-snow machines. The unused queue for the all-but-cursed Sylvester McMonkey McBean’s Very Unusual Driving Machines attraction was repurposed into the Grinch’s famously cluttered lair.

But the hottest draw for guests big but especially small was a scaled-down Mount Crumpit hiding behind Red Fish, Blue Fish, One Fish, Two Fish. It also happened to be pretty cold, in a relative sense.

In the heart of the fiberglass mountain was a 60-foot-long slide. It operated similarly to Fievel’s counterpart next door, but instead of water, the Grinch kept riders moving with a steady coating of freshly shaved ice. Any guests bold enough to wear shorts in December quickly learned the error of their ways.

Even though the slide was aimed more or less exclusively at kids, reviews were still mixed. It wasn’t very high, fast, or long. If anything, the Snow Plummet just fueled rumors and anticipation about a full-blown Mount Crumpit roller coaster that, to date, have come to nothing.

But despite its humility, the slide gave Universal Orlando a seasonal edge in its shakiest days. There was a reason to visit in December. The case could be made those early Grinchmases started the ball rolling toward the Tribute Stores and scavenger hunts featured today.

Now that Universal holidays, and the resort as a whole, are cozier than ever, the time is right for a return to the Mount. The plot where it once stood, roughly bordered by The Cat in the Hat and now-unoccupied Sharp Aquos Theatre, remains wide open. Sure, other parts of the park may call for swifter TLC, but maybe the time is finally right for that roller coaster.

Not that Universal went soft on the merrymaking in its early days. For the 1992 “Old Fashioned Christmas Party,” no expense was spared. Snow fell from the New York skyline. Santa scored his own soundstage. A proto-Plummet toboggan was constructed. It might’ve only lasted a few days like its spookier counterpart at the time, but the effect was undeniable.

As with most of Universal’s primordial celebrations, details are scarce and photographic record nearly non-existent. The rink did not last long, already history by 1994. Minus a picture or two of the Marx Brothers tackling Santa on skates, there’s almost no surviving account of where it even was.

But there are plenty of places it could one day return. The most obvious, if not necessarily the easiest to nail down, is a soundstage. They’re already cold by nature. Disney ran their own frozen pond in 2014, kept chilled in the former Backstage Pass building. If Universal wanted to beat the heat outdoors, concerts permitting, a rink would fit nicely in front of its Music Plaza Stage.

The liability may be too steep or the modern crowds too overwhelming, but you just can’t beat ice skating for festive recreation - and SeaWorld is already renting skates for $15 a pair.

Before Universal’s holidays even had a name, they had horses.

In the winter of 1990, guests could see all their favorite street sets from the romantic comfort of a horse-drawn carriage. It wasn’t an especially long trip - not even as long as the underwhelming Production Tram Tour - but it’s the thought that counts and carriages are about as thoughtful as theme park Christmases get.

Like most of the dearly departed traditions on this list, the biggest obstacle in the horses’ way is crowds. Unlike the comparatively tighter Islands of Adventure, Universal Studios Florida was built to handle shoulder-to-shoulder volume. That advantage, planned for the film crews that came and very quickly went, now pays dividends in the peak-time crushes. The only problem is that those crushes don’t leave much room for wandering Clydesdales.

Though the park is a lot busier than it was in 1990 and the season a whole lot brighter, finding room for horse-drawn carriages again would fit right in with all the new ways to celebrate. Condolences in advance about the clean-up.