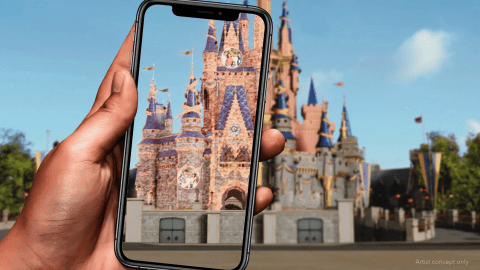 There are few things more frustrating during a Disney vacation than losing time because you forgot something important. Packing for a trip to Disney parks may seem straightforward, but there are some items that are easy to miss until it’s too late.

We’ve talked before about the benefits of having a smart Disney survival kit, but more and more lately, we are noticing that forgetting certain key items can really toss a wrench in a Disney day. Some of these are items that are difficult (or expensive) to procure in the parks. Others have become issues specifically due to ongoing restrictions related to the pandemic.

1. A means to charge your smartphone

Your phone will be doing some heavy lifting.

My Disney Experience is a helpful app, but it’s also notorious for draining cell phone batteries—a problem exacerbated by Disney’s in-park Wi-Fi. While Disney’s free Wi-Fi is a huge boon to those trying to avoid data fees, hopping from hub to hub sucks the juice out of phone batteries at stunning speed.

A dead smartphone can cause unwelcome complications in a Disney day, but keeping your device charged isn’t as simple as just bringing a cable and looking for an outlet. While you can find outlets in some locations (such as the Tangled section of Fantasyland, Tomorrowland Light & Power Co., and near the Garden Grill in Epcot’s The Land), they are impressively hard to come by.

Disney has offered a solution called “Fuel Rods” for some years that allows guests to purchase swappable power banks for around $30, but their power banks don’t have great charging capacity for all phones, and they’ve had a few seasons where they started charging fees whenever guests wanted to make a swap.

Instead of taking a risk, it’s worth investing in a well-made portable power bank before your vacation. Many quality models are available for a price similar to or not much higher than Fuel Rods and will serve you beyond the length of your vacation. The key features I look for are portability, power capacity, and charging speed. The Ravpower model I’ve used for some years is no longer available on Amazon, but there are many alternatives to choose from, such as this lightweight one from Anker.

This is one I didn’t expect to be an issue, but wow, it can catch you by surprise.

I’ve been visiting Walt Disney World throughout the pandemic and have grown familiar with the park’s various mask requirements. I have a comfortable mask I wear at Disney, and I’ve always remembered to bring it. Most times, I also bring a spare.

The one time I slipped up was when we brought a group of teens to the park. The trip was one of the most fun times I’ve ever had at Walt Disney World, but oof—we ran into one issue after another surrounding masks, despite efforts to double check that all the kids had them. One student didn’t realize she left hers in the car until we were literally walking up to Millennium Falcon: Smugglers Run. Knowing Disney’s long history of excellent guest service, I assumed some disposable masks might be available for odd occasions when a guest forgot theirs. We looked for someone to ask and couldn’t find anyone until halfway through the line.

No one had any, and the cast member told her in no uncertain terms she needed to leave offering no alternatives or solutions. It was a surprisingly abrupt encounter—one that caught me off-guard and was extremely uncomfortable for everyone involved. While the day was eventually saved (thanks to a kind fellow guest who gave her a mask afterwards), I felt terrible I had somehow forgotten to bring a spare and put her in that situation.

These sorts of scenarios happened several times. We had two other occasions where kids misplaced their masks—on one occasion, right as we entered the queue for Rise of the Resistance. We managed to DIY one out of a layered bandana and hair ties to bring it into compliance, but once again, the whole silly mess could have been avoided if we just packed a few extra masks.

It really surprised me how difficult it was to quickly find a replacement mask in the parks—whereas the things used to be ubiquitous in every shop, they now are limited to specific locations only. As far as procuring a disposable one, cast members seemed extremely iffy about offering one, and only once was I able to get a complimentary replacement.

We’re all human and losing a mask is an easy mistake that can happen—doubly so with kids. Save yourself a headache and bring a few spares if there is any chance pandemic restrictions will be in place during your visit.

At the time of this writing, fall is about to give way to winter here in Florida. While the Sunshine State is known for its warm temperatures, people might be surprised how chilly Orlando can get in the winter.

While cold days in Florida rarely rival northern states, we’ve found ourselves shivering at Disney parks more than once on a cold evening. It’s a situation ripe to result in an impulse buy to secure a sweater or jacket—two items that can be expensive if you weren’t planning for it.

Both for dealing with rain as well as colder months, we highly recommend checking the weather and bringing some sort of jacket or pullover on your next Disney park excursion if visiting any time besides the warm months.

As far as we are into this pandemic, it's not on Disney to provide masks for you. EVERBODY should have their own by now. So cry me a river about Disney not having masks available when it's on YOU and your groups to be prepared.

What's next,, you don't have an admission ticket, and you want Disney to provide you with one for free because you forgot to buy one?

Grow up and take some responsibility for yourself. You KNEW masks were required, and took this kid into the park without one. That's on you, not on Disney.