I Took a One Day Trip to Orlando. Here's Why (and How) You Should Try to Treat Yo' Self, Too. 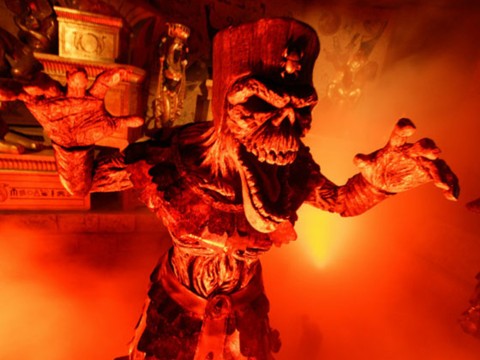 Even though I write about theme parks, the truth is, it's been a really, really long time since I've been to Orlando. Like many of you, my love affair with Disney, Universal, and the themed entertainment design industry is pretty one-sided since I'm from the Midwest. Don't get me wrong – I'm lucky to live within a day trip's drive of Cedar Point, Kings Island, and Kennywood, but obviously for folks like us, nothing satisfies quite like Anaheim or Orlando.

Like many of you, I had a once-in-a-lifetime trip to Walt Disney World scheduled – FastPass+ reservations booked and all! – for... May 2020. Suffice it to say, that didn't happen. And honestly, I hadn't taken a real "destination" trip since, meaning my 2018 visit to Disneyland is the last time I'd been to a major theme park.

So now, I did another thing that a lot of you are probably doing: I booked a much-needed, long-delayed, no-holds-barred trip to Orlando for January 2022. This is the big one – the one where I'm visiting both Universal Orlando Resort and Walt Disney World, staying on site at both (something I've rarely done), buying into the silliness that is Disney Genie+, booking a few table service restaurants... Like, truly, going all out to enjoy myself with the theory being – we deserve this!

To make this January trip even better, I'm bringing two family members who are as close to "first-timers" as you can get, meaning the trip is doubly exciting because I get to play tour guide and expert and see each attraction through their eyes, with my lips sealed about sideways elevators, broken track sections, water tunnels, and other incredible tricks and special effects.

January 2022 couldn't come soon enough... And then I read it: Revenge of the Mummy – one of my personal, all-time favorites that I've been raving about to my future co-travelers for years of building anticipation and trip delays – will be closed in January. Look, these things are totally unavoidable, especially if you dare visit in the "off-season."

Any time you book a trip more than a month or two out, you can pretty much count on some closure being announced as your trip nears... but one my favorite rides ever, that I haven't ridden in years? An anchor attraction that had been part of my sales pitch to get my friends excited for this trip?!

I considered a total trip change – maybe we could move the whole thing up to November? – but hotels were already sold out, tickets would need upgraded for the holiday season upcharges, there would just be other attractions closed (we miss you, Poseidon's Fury!) and it wouldn't get me out of the Midwest in the dead of winter. So what's a theme park nerd to do?

Given the title of this article, you know exactly what I did. In late October – once news of both major refurbishments broke – I sprang into action.

I purchased round-trip tickets on Spirit Airlines for a little under $100 per person – departing Friday at 6:30 PM (so I only needed to skip out of work an hour or so early to make it to the airport on time) and returning Sunday afternoon. (Side note: I had no issues whatsoever with Spirit. I realize it's a "no frills" carrier with more than a few horror stories, but it definitely fit the bill for a quick trip where all I had was a backpack. I went into it reminding myself to be flexible, and I was ready to endure flight delays or cancellations, but it didn't happen!)

Then and only then did I realize that a one-day ticket to Universal Orlando is pricey. A one-day, Park-to-Park ticket comes in at a whopping $165. Given that I'd already bought 3-day Park-to-Park tickets for the "real" trip in January for $305, I was really, really not excited about forking over another $165 for a one-day "preview" visit, "just" to see Revenge of the Mummy.

Then, I had a Jimmy Neutron style brain blast. Unlike Disney, Universal Orlando Resort is still more or less a friendly place for fans. I called Universal on a hunch (a 2 minute wait on the phone, by the way, when a call in for my Disney trip the week before was three hours and two minutes on hold) and yep – I could upgrade my 3-Day Ticket to a Pass for about $35 per ticket. Yes, people who exclusively visit Disney Parks – I, an out-of-stater, got an Annual Pass by upgrading a three-day ticket for just $35.

(Another side note: it was very, very easy to upgrade. I didn't make it to my hotel till 9 AM – well after the theme parks closed. I visited CityWalk's Guest Relations window, which is open till midnight or later – thinking there was no way they could make the upgrade. It took maybe 5 minutes, so there was no fuss the next morning at park opening!)

I booked two nights at Universal's Endless Summer Resort. If you don't follow the happenings up north on I-4, Endless Summer is Universal's newest hotel, and it's "quasi-on-property," meaning it's an official hotel with all the perks (like Early Entry), but it's located on International Drive (actually, the former site of Wet 'n' Wild) and thus a 5-minute bus ride from the parks. The two halves of the resort – the lakefront Surfside Inn and inland Dockside Inn – together add nearly 3,000 rooms to Universal's inventory.

I probably could've saved money by staying at a "true" off-site hotel, but not much money (it was a Friday and Saturday night at the beginning of the holiday season, after all), and besides, since I'll be at the Cabana Bay in January, this was my chance to see Universal's take on a true "Value" hotel on a low-stakes, 1.5-day trip. And it really was a "Value," with room rate below $150 a night.

By the way, Endless Summer was fantastic! Sure, the soft goods weren't premium, but the rooms were bright, airy, fresh, modern, clean, surprisingly spacious, and perfectly appointed with "beachy" decor. The resort as a whole had such great energy, a great food court, a full Starbucks, access to International Drive restaurants, shops, and pharmacies, and quick, continuous shuttles to the parks with literally no wait. (Frankly, it's hard to believe Disney charges significantly more for their motel-style "Value" and even "Moderate" resorts!)

Throw in a Lyft to and from the airport (admittedly, $35 each way) and some money for food and you've got yourself a trip for, say, $400 or $450 per person, all-inclusive. Obviously, that's still a lot of money! (I personally made it work by cutting the rental car out of my "big" January trip, basically shifting that cost to this smaller, separate trip.)

Look, I know that for many, $400 + food is way too much money to blow on a spur-of-the-moment trip, especially when there's a "real" trip to Orlando on the horizon! My intention here is not to convince you to blow your budget on an unnecessary visit to Orlando, nor to convince you that Universal Orlando Reosrt is worth a visit if you're somehow still determined Disney is the end-all-be-all for you. Instead, it's maybe to be just a little bit of a "devil on your shoulder..."

The Devil on Your Shoulder

Obviously, this specific splurge was made easier to stomach by aspects of my unique situation – like having easily-upgradeable, already-purchased tickets or a DINK (double income, no kids) financial situation. But the point is simpler than the finer details of my one-day trip to Orlando. It's about proving to you that you can and probably should do something nice for yourself that you can comfortably afford to do.

After all, we've been through a lot. We've lost a lot. We've given up a lot. And if you have done everything you can to "love thy neighbor" and care for yourself and others during a really difficult time for humanity, I'm going to go out on a limb and say you should definitely do that which you can comfortably afford to do because you deserve it!

Whether it's a weekend getaway or a massage or some new candles or a new phone or a home improvement project or seeing Revenge of the Mummy before it goes down for an extended refurbishment, consider me someone who's rooting for you to treat yo' self.