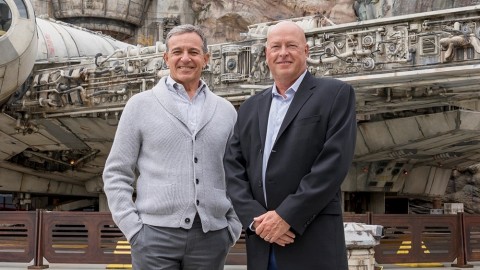 Being a Disney Parks fan isn't always easy. On top of handling annual price hikes, disappearing perks, closing classics, reduced portion sizes, and merch resellers, following "Disney Parks" news can be... complicated! With retiring stars and new names coming in and out of the conversation every year, it can be hard to keep up with who's who in the what's what of the Mouse House.

We're here to help! Today, we'll take a look at six of the big name "who's who" figures you've got to know if you stand a chance at understanding Disney Parks news... and the rumors, complaints, credit, and blame that's always a part of the conversation... Hopefully this guide adds a little context to the next big story or must-follow figure you hear about!

Bob Iger began his career in 1974, earning $150 a week as a go-fer for ABC. Gradually, he worked his way up to a Senior Program Executive at ABC in the ‘80s. Progressive positions with the entertainment broadcaster eventually saw Iger elevated to President and COO of Capital Cities – ABC’s parent company – in 1994… just in time for Michael Eisner’s Walt Disney Company to buy Capital Cities in a staggering media acquisition for the era.

Iger remained President of the acquired Capital Cities until 1999, when he took over Disney’s international business unit and became Chairman of ABC. In 2000, he was elevated to Chief Operating Officer of the entire Walt Disney Company – Eisner’s number two position, vacated by the infamous departure of Michael Ovitz after just 16 months in the role. When Michael Eisner left Disney in 2004 (before the end of his contract), Iger was elevated.

Mere months after assuming the Chief Executive Officer role, Iger announced that Disney would purchase Pixar for a staggering $7.4 billion – one of the largest acquisitions in the company's history, especially for a brand new leader. His tenure is marked by similarly massive intellectual property acquisitions of Marvel ($4 billion) and Lucasfilm ($4 billion), plus the once-unthinkable purchase of another of the "Big Six" film studios, 21st Century Fox ($71.3 billion). In other words, though Michael Eisner definitely began Disney's growth into a global media company, Iger arguably oversaw that journey's peak.

In the parks, Iger presided over an era of spectacular expansion during which the company's theme parks were one battlefront in the "IP Wars." The era of "Living Lands" – like Toy Story Land, Cars Land, Galaxy's Edge, Pandora, and Avengers Campus – has been entirely contained within Iger's tenure.  Iger also oversaw the costly response to the decade of underfunded parks he inherited, greenlighting the remaking of Disney California Adventure (above, with Tom Staggs), Hong Kong Disneyland, and Walt Disney Studios Paris.

Famously tending toward the creative side of the business, Iger is largely viewed as a leader who went with his gut, making big, splashy acquisitions, empowering creators, and insisting on quality. A big believer in the danger of "brand withdrawals," Iger is well regarded for insisting on quality across the Disney brand, maintaining consistency across the growing company. His legacy is enshrined forever by his acquisitions of Pixar, Marvel, and Star Wars, the opening of Shanghai Disneyland, the $70 billion purchase of 20th Century Fox, and the launch of Disney+.

Iger was initially set to retire at the end of his contract in 2016. Two candidates – Tom Staggs (Chairman of Parks & Resorts) and Jay Rasulo (Chief Financial Officer) – were believed to be Iger's top picks to succeed him. He even had the two executives swap roles in the early 2010s, which industry commentators suspected was an attempt to broaden both candidates' experience ahead of one of their selections. Ultimately, both Staggs and Rasulo left the company, leaving Iger without a successor. His contract was extended to 2018, then 2019, then 2021.

Iger unexpectedly announced that he was stepping down immediately (and 22 months before the end of his contract) from the CEO on February 25, 2020 – probably not coincidentally, just as the reality of the encroaching COVID-19 pandemic became headline news. He agreed to stay on in a custom-made role – Executive Chairman – until the end of 2021. One of his stated goals in the position was to handle the “creative” end of the business while coaching and mentoring his replacement, whose experience in the “creative” is… well… suspect…