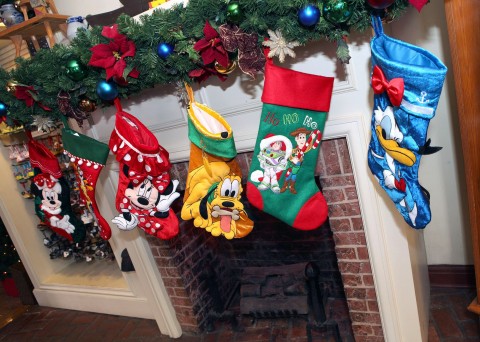 Tis the season between seasons, at least on the theme park calendar. The pumpkins and plastic gore are already fading into memory. The wreaths are just waiting to get plugged in. Should any turkeys happen to wander by in the meantime, consider it a Thanksgiving miracle and turn up the Mariah Carey. Ready or not, Christmas is coming.

And so, too, is Christmas shopping. It may not be what you want to think about on your vacation, but there’s no better time to worry. Gifts from afar/Florida let loved/liked ones know they’re being thought of fondly even when you’re away from it all, them included. Picking up marquee presents in the parks, however, might strain the natural limits of carry-on and credit card alike. Fortunately, there’s more to souvenirs than that exclusive Lego set that costs more than a brand new carburetor. The following suggestions are cheaper and smaller but no less novel ways to fill out the stockings come December.

The newest souvenir in town isn’t new at all, let alone in town.

Mold-A-Rama machines first started minting made-to-order souvenirs at the 1962 Seattle World’s Fair. Even though business picked up across the following decade at further exhibitions, no new Mold-A-Rama has been produced since the 1960s.

So the handful that Universal has been festively updating the last few years? All antiques, including most of the molds - the Jurassic World Tribute Store’s waxy dinosaurs were first sculpted for a Sinclair Oil showcase in 1964. But that history, or at least a sense of it, is obvious - the machines tell it in real-time. They are 3D printers primeval, the magic process an attraction unto itself. Presto-chango - a piping hot souvenir to go.

Long before Universal made them a seasonal tradition, Mold-A-Ramas were cranking out affordable art at Busch Gardens Tampa and Gatorland. Both still offer their respective menageries of the animal kingdom in convenient, pocket-sized form year-round, so no visit to Central Florida need go un-molded.

At $5 to $6, these little sculptures are the most unique stocking stuffers anywhere near that price. For youngsters, they’re toys and showpieces fit for any bedroom shelf. For grown-ups, they’re kitsch history in a conveniently portable package. And really, who could resist a bespoke, plastic alligator on Christmas morning?

Every retail establishment within a mile of wherever you’re reading this already has more Christmas candy for sale than any given family could eat in their collective lifetimes. Chocolate Santas are just part of the deal.

But instead of relying on M&M-filled candy canes to cushion the goods, why not make the sweet stuff a little more interesting?

No matter your timeframe, visiting two months out or two days prior, theme parks have you covered. There’s plenty of variety in even the simplest, shelf-stablest offerings.

Down the highway, Goofy presides over every candy known to consumers. Sour. Sweet. Chewy. Powdered. They may not be chemically dissimilar from the same hang-bags you’d find at the corner convenience store, but they do carry a cartoon seal of approval. For any discerning buyers in search of a more authentic confection, you’d be hard-pressed to find a store on property that doesn’t sell those rainbow lollipops everybody’s tried but nobody’s finished. This isn’t even taking into account the literal world of possibilities represented by Epcot.

For anything fresher, use your best judgment; cookies with mouse ears and butterbeer fudge can help to make the season bright but also slightly nauseous if left out too long.

Pennies have been crushed in the name of fond memories since 1893, at an exposition commemorating the 400th anniversary of Christopher Columbus’s arrival. Like the Mold-A-Ramas to come, so-called “elongateds” didn’t make it much farther than the World’s Fair, at least for a while. It wasn’t until the mid-‘80s that penny presses made their way into theme parks - Disneyland flattened its first in 1987. Today, they’re about as common as any other vending machine.

Disney operates penny, dime, and quarter machines, though even the cheapest variety runs a dollar. There’s a pocket-change tribute for every animated character if you know where to look around the World. What Universal lacks in real estate, it makes up for in density - the resort is lousy with flat Lincolns. The hidden gems among that particular lot are memorials to past attractions, not always located where you might expect. There are also Forrest Gump coins, for very singular tastes. In both cases, coin books are readily available in most gift shops.

But it may be difficult to get family and friends excited about uncommon cents. Disney picked up some of that slack with collectible medallions. These run bigger, about an inch-and-a-half across, and more expensive at $5 per, but they’re much more substantial than the old standby. Because there are fewer machines to go around, the designs run more generic by default; Mickey’s complete wardrobe is present and accounted for. A little welcome variety comes in color, with select medallions struck in varying shades of precious metal. For that special someone with a distinct soft spot for Pluto or Pirates of the Caribbean, going for the gold might be just the thing.