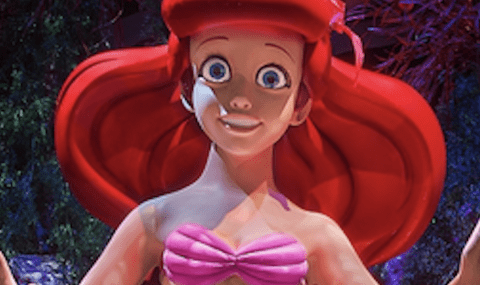 Despite a trip to Orlando being marketed as a dream come true, there's plenty at Walt Disney World and Universal Orlando designed specifically to scare you. From shrieking dinosaurs to hissing grasshoppers; revived mummies to singing sea witches, many of the figures that landed on our Countdown of the 25 Best Animatronics on Earth prove that when designers want to scare you, they can.

But let's be clear: sometimes, the scariest Audio Animatronics aren't meant to be scary at all... Today, we've collected four theoretically-innocent, unintentionally-creepy Audio Animatronics you'll find at Walt Disney World and Universal Orlando Resort. Our advice? Don't look into their eyes before bed...

Obviously it takes a pretty cynical person to call the "small world" dolls creepy, but we couldn't leave them off this list. In practice, it's probably more the idea of the ride's cast of singing dolls than the reality. There's an artful agreeability to the figures' faces. It's hard to perceive them as "scary" because by most measures, they're not. They also don't really make "eye contact" with riders, which also adds to their benevolence.

Yet for many people, there's something hypnotically eerie about the synchronized, singing dolls. Actually, while the continuous loop of Richard and Robert Sherman's theme song is sometimes cited as adding to the figures' creepiness, the relentlessly joyful tune probably makes them a little less scary than any less-beloved song would.

Of course, like many Disney Parks classics, "it's a small world" has been often-imitated, but never quite duplicated... A host of Asian park knock-offs have made the rounds on YouTube. Some are playful, cartoonish reimaginings while others are horrendously horrifying.

The last of EPCOT's original, informative, industry-centered dark rides, Spaceship Earth tells the story of human communication from the Stone Age to the Space Age. That's a lot of ground to cover! About halfway through the ride, the invention of the printing press leads to an American city where a young, blonde-haired newsboy calls out the headlines: "Extra! Extra! Read all about it!" For most of the ride's history, the paper boy stood along the ride's track, waving hot-off-the-press pages at riders as they glided past.

But at least as of the ride's last major reimagining (2008), the young paper boy was relocated to the back of the scene, facing away from riders and instead hawking his papers toward... a wall... Okay, that wall is a painted flat representing a continuing street... But the image of the news boy turned around and selling his papers away from guests has struck a number of fans as unsettling...

More than likely, Imagineers just decided that relocating the figure helped balance the scene... but fans have concocted the theory that – just out of sight of guests – the paper boy's face was damaged in the redesign, necessitating the figure's front remain hidden from guests. The goosebumps-inducing idea that the awkward placement is hiding a broken or missing face somehow adds serious chills to the scene. It goes without saying, we feel bad for the Cast Members who have to walk past that scene when the ride's closed at night...

You may have heard of the "Uncanny Valley" hypothesis. The idea is that humans have an innate emotional response to viewing humanlike things, and the more humanlike something appears (think the totally-lifelike Kylo Ren or Shaman of Songs Audio-Animatronics), the more positively our brains process it... up to a point. At some point, the hypothesis says, things become so humanlike that any break in the illusion sees a steep drop off in comfort – a valley – that comes across as cold and eerie. (There are lots of theories to explain the "Uncanny Valley," including that things that look "human-but-wrong" trigger disgust to help us avoid people who are sick.)

Such is probably the case with the Audio Animatronics of Ariel found in Under the Sea: Journey of the Little Mermaid at Magic Kingdom and Disney California Adventure. By all accounts, the figures of the mermaid heroine are incredibly advanced. But rather than reading as highly lifelike, they feel... off. The figure's tiny size, huge cartoonlike eyes, twelve-inch waist, and lipless mouth reads as "cold" in the "Part of Your World" scene, and the "Under the Sea" version is even eerier...

Consider that the photo above is an official Disney promo image! Yikes! It's weird that Ariel translated so poorly to three dimensions in the ride; the version of the mermaid on the marquee looks much better, and Ariel was beautifully brought into three dimensions for the Kingdom Hearts video game series. Either would've been a much better model for the character than the creepy, eye-twitching animatronics on the ride!

You just have to love E.T. Adventure – the only remaining Opening Day attraction at Universal Studios Florida. Overseen by Spielberg himself, the ride is essentially a "sequel" to E.T. wherein guests must return the lovable alien to his home world – The Green Planet – which was never seen on screen. Spielberg & company invented a cast of alien creatures to inhabit the planet, including singing mushrooms, pumpkin-headed spider-plants, the wise leader Botanicus, and... Magdol.

A hybrid of a rose plant, a Longaberger basket, and the mutant Spider Baby designed by Sid in Toy Story, Magdol is scary enough in concept, but the figure's aging Latex skin, stilted animation, and sunken-in eyes (to the point of reading as empty holes) are downright bone-chilling. In the '90s, the character awoke alongside the Green Planet and sang in a beautiful voice while offering riders a rose. At some point, that was replaced with a "whacky aunt" voice thanking us for saving her planet... but let's just say that if Magdol had come to Earth intead of E.T., the movie would've had a lot more screaming.

When you’re riding E.T. Adventure and you have to fly past Magdol pic.twitter.com/9DAQ0f5d8v

This was a good list but I would definitely include audio-animatronic Trump as well. *shiver*