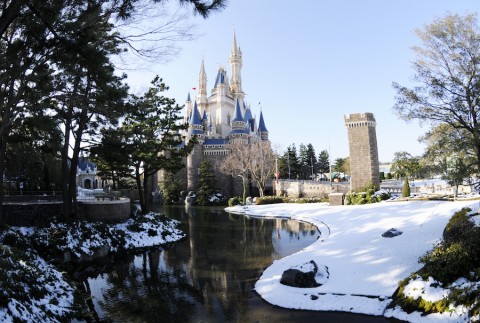 There's no doubt about it – for fans of Walt Disney Imagineering, Tokyo Disney Resort is a bucket list destination; home to what many call "the best theme park on Earth." There's an aura of mystery around the far-flung resort set down on the waters of Tokyo Bay, right in the middle of the world's largest city. Of course, fans want to get there... but it's so far away! So foreign! So expensive! ... Or is it? Today, we'll run some (very, very basic) numbers to prove that if you can afford a trip to Walt Disney World, you can and should move Tokyo Disney from "dream destination" to "our next great adventure."

To be sure we're isolating our variables as much as possible, we'll make like comparisons anywhere we can – for example, we'll price both trips as departing from Pittsburg, Pennsylvania (which just seemed like a good non-coastal city), have both trips last the same amount of time (7 days – which is arguably too little time in Tokyo, but enough to visit Tokyo Disney Resort and the city for multiple days each), plan both trips for the end of May, for two people, and with "Moderate" level accomodations once we arrive. Orlando and Tokyo aren't apples and apples, but we'll do our best!

And yes, you can argue in the comments about the particulars, telling me I've set aside too much money for food or transportation or that I'm not booking the wrong season or that you know a great discount hotel. But stick with me here. There's a simple lesson to learn at the end of this! So absolutely feel free to swap out what you'd set aside for food or souvenirs and make the adjustments, but even if my calculations are rough and far from all-inclusive for either trip, the basic numbers should get the point across. Ready to start planning?

For most Theme Park Tourist readers, a trip to Walt Disney World is old hat. You probably know the ins and outs of a trip to Orlando and have tried-and-true resorts, parks, and experiences you count on a trip that takes place every year, two, three, or four. You may even be a local with a coveted Annual Pass. Our goal here is to create a reasonably nice, once-every-few years trip to the resort for two. Neither bare-bones nor extravagant, this trip is merely a model against which to compare a similar trip to Tokyo Disney Resort.

Orlando is one of the most accessible destinations in the United States, with lots of carriers offering lots of direct, nonstop flights from lots of cities. In the last two weeks of May (the time I'm pricing both trips for), the flight from Pittsburgh to Orlando comes in at a respectable $330 on American Airlines. You could pay $30 less for a flight on Spirit either leaving at 7:15 AM, but I wouldn't. So for two, our roundtrip flights to and from Orlando total $660.

This is another area where your mileage will literally vary. Especially if Disney World is your only destination in Central Florida, this cost can be very, very minimal. Though Disney's Magical Express airport transit service is one of many perks that have disappeared, Mears' unbranded continuation of the service offers round-trip transit for $32 per person. Uber and Lyft are options too, of course. For that reason, we'd say the minimum cost of transportation is $100.

The maximum isn't hard to figure out. Right now, an economy car rental from Enterprise for the week would come in $610 without insurance. In another slashed perk, Disney's "Moderate" resorts now charge $20 per night for parking, adding an additional $120. In exchange, though, you'd have to freedom to drive yourself to Disney's theme parks with "free" parking (because, y'know, you already paid it) as well as off-property. So depending on how much control you want over the trip, let's say transportation would range from $100 to $800.

There's a certain amount of stress when it comes to picking tickets for Walt Disney World, isn't there? Do you go with a classic 4-Day, One-Park-Per-Day setup that'll leave you rushing? Do you add a day, and if so, which park do you repeat? Is Park Hopper worth it? For obvious reasons, Disney's "the longer you play, the less you pay per day" policy doesn't really kick in till your 6th day anyway. For the sake of consistency and a little flexibility, I'll plan for a 5-Day Ticket with Park Hopper – a surprisingly astronomical price of $612 per person.

Since I want the trips to be as equivalent as possible and Tokyo Disneyland still offers free FastPass, I'll also need to partake in one of Disney's delightful new upcharges – Disney Genie+ grants me access to the "Lightning Lanes" of (most) major attractions. At $15 per person per day, that'll add $150 to my tickets, for an all-in, two-person, park tickets total that might surprise you: $1,374.

The good news is, as you well know, you've got plenty of flexibility in this area. With over 30,000 hotel rooms divided into "Value," "Moderate," and "Deluxe" levels, accommodations at Walt Disney World run the gamut. You can stay at the All-Star Movies Resort for $150 a night or the Grand Floridian starting at $800 per night. You can even stay off-site at a Comfort Inn down the road for just over $100 (but your transportation costs would increase as a result).

Again, in the interest of building pretty equivalent, middle-of-the-road stays, we'll price our May trip at one of Disney World's "Moderate" on-site hotels (which, despite their name, are still, y'know, well-dressed motels). Disney's Port Orleans – Riverside is generally considered one of the resort's nicest "Moderates" and, price-wise, comes in at the middle of the pack. There, a standard, 2-Queen room with uninspiring views averages $304 per night for the week, giving us a 7-night accommodations cost of $2,128.

Another number that varies wildly, but again for the sake of pricing out a reasonable, realistic, and comparable trip, let's give each person $100 per day. Some may balk at that number but consider a day at the Magic Kingdom where $100 might get you a $10 Starbucks to start your morning, a $20 quick service lunch, and a $70 Be Our Guest prix fixe dinner.

Some will find that number way too small for a per-person per-day food budget, while others will think that's way too much. Please don't nitpick this number – just swap it out for whatever you feel is an appropriate per-person, per-day food amount. It won't really affect our comparison, because we'll use the same number when we price out a trip to Tokyo. So knowing we'd rather have it and not need it than need it and not have it, I'll budget $100 per person for 7 days, setting aside $1400.

Assuming that out of your seven-day trip you'll be actively involved at Disney Parks for five days, we'll budget $100 per person per free day to do "other" things. Essentially with $200 per person (which honestly is pretty conservative number), you could either do lots of little things or one or two big things. That could include Jellyrolls, mini-golf, Cirque du Soleil, and/or other ticketed activities onsite, or a day trip to Universal Orlando, Gatorland, LEGOLAND or Weeki Wachee Springs. With just two unplanned days, we'll set aside a total of $400.

In the spirit of making this budget realistic, let's be sure we incorporate something for souvenirs, gifts, taxis, and other "cherry on top" expenses. $50 per person per day sounds right because it sets aside $350 over the course of the week – enough to either spend very little and have a lot left to put back in your account, or enough to buy a Lightsaber one day and tchotchkes the rest. Again, you could set this number at $500 per person per day or $10. It doesn't really matter, because it can stay the same for Tokyo if you want it to. So $50 per person per day means that for a duo's week-long trip, we'll set aside $700.

Some will think that our Orlando trip is priced with ridiculously absurd extravagence; others will think this trip is way, way underrepresenting the cost of a Walt Disney World vacation. Absolutely feel free to insert your own numbers and crunch them – that's the point of this article! But for what we're considering a middle of the road trip with a healthy amount of money set aside for living the vacation life, our total, two-person, seven-day trip to Walt Disney World in May 2022 comes in at $6,702 (and that's the option with rideshare rather than a rental car).