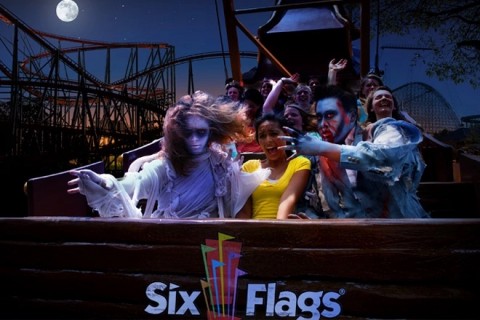 Both fear and fog have spread across Six Flags Great Adventure in Jackson, New Jersey with the launch of its annual Halloween event, and Theme Park Tourist was lucky enough to be invited to sample the spooky offerings. As a lifelong coaster enthusiast (and Cedar Point local) who's always wanted an excuse to make the six hour drive to New Jersey (and to ride the record-breaking Top-Thrill-Dragster-lookalike Kingda Ka), the chance to report on Great Adventure's Fright Fest presented by Snickers was just the excuse I needed.

There's just one problem... I hate jumpscares! I mean, like many of you, I can't wait for Halloween season! I love watching YouTubers with the strength of steel tackle Halloween Horror Nights and Knott's Scary Farm houses without flinching! I'm always in awe of what even seasonal, regional parks can pull off for temporary, seasonal events (often while having one or even zero permanent dark rides, but that's none of my business). So reviewing Great Adventure's event was literally a dive into the deep end.

Full disclosure: I was hosted on behalf of Theme Park Tourist by Six Flags Great Adventure, and thus received complimentary admission to the park including Press lanyard, parking, admission, and Fright Passes (which provide access to the nine "premium haunted houses"). I purchased The Flash Pass on my own to ensure I could get through the park's thrills by day before the haunts at night. However, all opinions are those of the author.

Six Flags Great Adventure is a very nice park. It's been a part of the Six Flags "family" since the '70s, and has survived the company's many sell-offs, acquisitions, expansions, and retractions. As evidenced by its 14-coaster lineup (including five B&Ms, the S&S Freespin Joker, the famous prefab woodie El Toro, the brand new RMC single-rail Jersey Devil that TPT's Peyton reviewed here, and the world's tallest coaster, Kingda Ka) this is a Six Flags flagship. In fact, drawing from Philadelphia and New York City markets, I'd probably consider Great Adventure one of Six Flags' three regional flagships opposite Los Angeles' Magic Mountain and Chicago's Great America.

On paper, the park is divided into the Boardwalk, the pan-Asian jungles of the Golden Kingdom, Frontier Adventures, Fantasy Forest, the DC-focused Movietown, the Lakefront, and Adventure Seaport (plus two kids areas) but in practice, not even the map bothers to label them, and big, bright, bold DC Hero-themed coasters are pretty evenly spread among them all, "theme" be damned. That's to be expected of a Six Flags park, and Great Adventure manages to make it all look good thanks to historic corners, full-grown trees, and a lakeside setting.

Even before the sun sets, things start to get spooky. The hiss of fog machines and a parkwide switch from pop music to chilling wind and distant gasps signal that if you want to get out un-scared, you better make it quick. For journalism, I stayed, ready to test out the park's premium haunted houses (which, remember, you'll need a separately-purchased Fright Pass to access).

One thing I definitely noticed early on is that from the outside, Fright Fests' haunts and scarezones looked practically low key – most were marked just by a standard banner with the house's logo stretched between poles or hung along the exterior of a warehouse or theater. That's significantly less "showy" than you might be used to if you, like me, spend October watching Universal or Cedar Fair parks haunted house POVs. (I used my roadtrip to New Jersey to stop by another new-to-me park – Cedar Fair's Dorney Park in Allentown, Pennsylvania – which, despite being a much, much smaller and more locally-focused park, had pretty incredibly built-out facades and full-blown sets for their houses and scarezones.)

Altogether, Great Adventure offers nine haunted houses for 2021: The Lab, Blood Shed, Xpedition Dino: Survival, Wicked Woods, Big Top Terror, The Manor, Reflections of the Dead, Aftermath, and Fears. It's tough to rank them since (as I've learned!) so much of a haunted house experience depends on the people you're grouped with, where you are in the conga line, and quantity and quality of scares as limited by this year's hiring issues.

That said, I'd say a handful of the park's houses do transcend "lightly themed plywood mazes" and aren't so dependent on scareactors to be very good attractions. Big Top Terror: Forgotten Carnival (video) makes great use of blacklight, scenic design, lighting, and misdirection becoming a very claustrophobic funhouse with great props. Blood Shed (video) may be your classic cannibal slaughterhouse haunt, but it had incredible actors and surprisingly great sets, made awesome use of the Golden Kingdom's dense foliage and darkness, and included – gulp – chainsaws.

Reflections of the Dead (video) was almost ridiculously simple – a classic mirror maze populated with shrieking, pop-out actors – but helped me get in touch with the idea that these houses are supposed to be fun; you're supposed to be laughing. Wicked Woods didn't make a lot of sense story-wise, but included some great show scenes that made me want to stop and watch for a moment, including a finale with a voodoo priest, music, fog, light, and sound.

There's only one haunted house that felt "not good," and that would be Xpedition Dino: Survival (video). While I personally enjoyed walking along the paved roadway that would usually permit personal vehicles into this up-charge, add-on animatronic dinosaur spur of the drive-through Safari, it wasn't a "haunted house." Animatronic, educational dinosaur walkthroughs have been all the rage at theme parks over the last decade, but anyone who's stepped through one will tell you, the animatronics aren't exactly intimidating or aggressive or quick. As a peaceful trail past well-lit dinosaurs in a foggy, dark woods, it's a cool experience, but the addition of a handful of scareactors really couldn't turn it into a "haunted house" where it should've been a family offering.

In terms of pricing, a one-day ticket to Six Flags Great Adventure ranges from $34.99 to $64.99 with parking coming in at a whopping and industry-topping $30. In keeping with Six Flags tradition, the better value might be a 2022 Season Pass that includes the rest of 2021 (for $79.99) or Gold Plus Membership (which, despite its name, seems to be the lowest level Membership?) for $6.99 a month since both include parking. Once you're in the gate, a Fright Pass (with one-time admission to each of the nine Haunted Houses) starts at $34.99 – if you manage all 9, that'd be about $4 per house. Without a Fright Pass, you can still enjoy the atmospheric spooks, entertainment, thrill rides, and outdoor Scarezones.

Would we recommend Six Flags Great Adventure's Fright Fest? As a relative outsider and someone who's not exactly a haunted house fan, I'd say it's well worth the visit! Especially if Great Adventure is new to you, October weekends feel like a great time to tackle the park's thrill ride collection and add a dozen credits to your coaster count with relatively short waits all morning, then refocus on the scares in the evening. (Wait times really seemed to inflate in the late afternoon as Fright Fest crowds began to show up.)

If you're expecting Universal-level details, movie-tie-ins, and sophisticated scares, Six Flags Great Adventure's Fright Fest may not be for you. But if you just want to have fun and be shrieked at and startled in good, ole' fashioned mazes while roller coasters scream overhead, this is the place to be... just don't mind if I leave before dark.