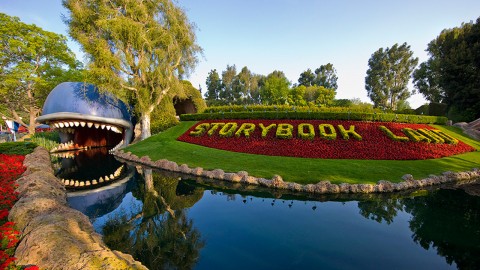 Disney Parks boast many incredible attractions, whether they’re old classics like Peter Pan’s Flight, or newer ones like Star Wars: Rise of the Resistance. But there are some attractions that don’t really get the attention they deserve. When it comes to appreciating the finer detail on offer at Disney Parks, sometimes less is more. And there is perhaps no better example than Disneyland's Storybook Land Canal Boats.

Located at Disneyland Park’s Fantasyland, the modest attraction, which has been open since 1955, allows guests to enjoy a leisurely boat ride along a canal, along which they pass miniature settings from a number of Disney animated classics. It might not be quite as thrilling as some of the park’s more recent attractions, but that's the whole point. Here’s why we need more attractions like Disneyland’s Storybook Land Canal Boats…

For Storybook Land Canal Boats, you’ll board a 12-person, open-air boat, where you’ll be accompanied by a tour guide. After passing through the mouth of Monstro the Whale, you’ll enter an enchanted land of Disney fairytales – except this time, unlike experiences that ‘shrink’ you, such as Toy Story Land or Disney World’s upcoming Remy’s Ratatouille Adventure, it’s everything around you that will be doing all the shrinking, as this ride features tableau-versions of iconic fairytale settings.

The stories these hand-built cottages, castles, villages, and towns are based on, are The Three Little Pigs, The Adventures of Ichabod and Mr. Toad, Lullaby Land, and more well-known ‘properties’ – pun intended – such as Alice in Wonderland, Peter Pan, Aladdin, Snow White and the Seven Dwarfs, Cinderella, Frozen, Pinocchio and The Little Mermaid. And like a storyteller, your tour guide will tell you the fairytale behind each miniature setting.

It’s good for the soul

To describe Storybook Land Canal Boats as anything but quaint, calming, leisurely and peaceful, would be a lie. Beyond passing through the mouth of a large whale, there really isn’t much happening here in the way of action, but this is one of the ride’s strengths. You can experience thrills and other such emotions on many other rides, but Storybook Land Canal Boats is of the gentle variety, and is a good place to recuperate from the wild side of Disneyland, and even practice some mindfulness!

With that said, you don’t really want to close your eyes, as you will miss out on a great deal. But this ride isn’t just about visuals. Beyond the charming and magical simplicity of the land’s miniature settings is the queue music, which includes many scores from the likes of Peter Pan, Sleeping Beauty, Mary Poppins, The Jungle Book, Beauty and the Beast and even more recent movies like Frozen. See – it’s the perfect attraction to just let it all go!

The level of detail is magical

It’s not all about the latest special effects, whether it’s an audio-animatronic or CGI, and Storybook Land Canal Boats is an extremely modest attraction that relies far more on aesthetics, intricacies, and nostalgia to create an enchanting experience for its guests. Some of the most memorable fairytales were handpicked for this attraction, along with their most iconic settings – such as the Cave of Wonders from Aladdin and King Triton’s underwater castle from The Little Mermaid.

Each picture-perfect tableau is accentuated by special lighting, while the intricacies are astounding – you won’t want to leave without taking one of the sets home. Of course, this is strictly forbidden, so keep your hands inside the boat at all times! You will, however, leave wondering why Disney hasn’t built other such rides. And we don’t mean repeat versions of this one specifically (there’s already a Disneyland Paris version) – we’re talking about 'miniaturizing' other Disney stories.

Other IPs could be used in the same way

In fact, let’s elaborate on the idea of miniaturizing other Disney Park experiences for just a moment. Imagine a ‘Pixar Land Canal Boats’, which would feature miniature settings from the likes of Monsters. Inc, Finding Nemo, Toy Story, Soul, Coco, and more. Pixar doesn’t just have variety on its side, but also quite the color pallete!

And let’s not forget the original Disney bunch, either, such as Mickey, Minnie, Pluto, Goofy, Donald and Daisy. As for a setting, why not miniature versions of Disneyland itself – how awesome would that be! Or how about ‘Star Wars Land Canal Boats’, which would showcase epic battles, worlds and ships from the faraway galaxy, much like Legoland’s now-defunct LEGO Star Wars Miniland. And we haven’t even touched upon Marvel – with twenty-something movies, the possibilities would be endless!

Storybook Land Canal Boats really is the quintessential Disney Park attraction, capturing the magic of many Disney classics in a single experience. The Disneyland Paris version, The Land of Fairy Tales, is equally enchanting, whose miniatures include Hansel and Gretel, Rapunzel, Fantasia, The Sword in the Stone and The Wizard of Oz. But regardless of the fairytales included in Storybook Land Canal Boats, the experience will have your imagination visiting all the ones you can think of in no time.