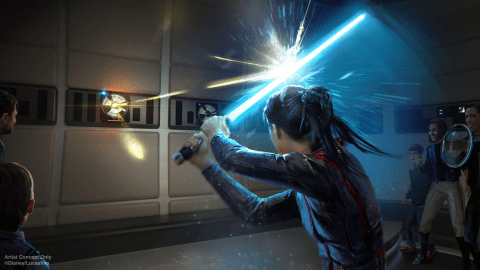 What if you could actually live out an adventure in the Star Wars universe… not just in a land on a ride but to be 100% immersed in a galaxy far, far away for two days?

We know much more about Star Wars: Galactic Starcruiser than we did at the beginning of the year, and the impending arrival of this unique resort is starting to look more concrete. We now know what a sample itinerary for a visit to Galactic Starcruiser might look like—a mix of activities, dining, entertainment, and unique story moments—as well as that a visit to Star Wars: Galaxy’s Edge (with access to both Star Wars: Rise of the Resistance and Millennium Falcon: Smugglers Run included) will factor into that story. We know what the cabins will look like, and we know the price guests can expect for this all-inclusive adventure—between $749-1209 per guest per night, depending on how many people you’ll have per cabin.

Sticker shock aside, there are some burning questions we have about Star Wars: Galactic Starcruiser that still haven’t been answered yet…

1. What will the limits be on cosplay?

Cosplay is serious business among Star Wars fans—we love dressing up as our favorite characters for movie premieres, conventions, and other special events. International organizations like the 501st Legion are full of dedicated fans who have made an art out of replicating studio-quality costumes (just watch the finale of season one of The Mandalorian to see some examples—most of the stormtroopers are 501st members in their own armor).

Disney decided to lean into this tradition with the opening of Star Wars: Galaxy’s Edge by bending their longtime rules regarding guest costumes. In most cases, guests over the age of 14 cannot dress up in costumes when visiting Walt Disney World (the exception being “Disneybounding” outfits made of modern or vintage clothes). With the arrival of Galaxy’s Edge, Disney opened up a new option, sometimes called “Batuu-bounding”, where guests could dress up as their own Star Wars character. While there were some strict limitations on this when the land opened, many of these have been lifted (with the exception of things like armor, large prosthetics, full masks, etc.), giving guests a large amount of freedom to live out adventures on Batuu.

For Star Wars: Galactic Starcruiser, guests aren’t just being permitted to dress up—they’re actually going to be encouraged to wear costumes beyond anything Disney has allowed before. Disney Imagineer Ann Morrow Johnson stated that, “We are encouraging our guests to be in full cosplay, so if you want to have Twi’lek lekku and a full robe, we are all for it aboard the Halcyon.”

In the past, Disney has limited costumes largely for safety reasons—mostly so guests (and especially kids) don’t mistake costumed guests for cast members. While we are definitely excited about Disney encouraging full cosplay, we are curious what limits they’ll place on the practice.

It seems likely that blasters will remain banned, but what else might be up in the air? Will armor be allowed, and if so, what about helmets? Will costumes based on known characters from the Star Wars galaxy be limited to prevent timeline issues? Will certain costumes be banned to maintain immersion? What about dresses and robes that drag on the floor (currently banned in Galaxy’s Edge)? Intricate face paint? It sounds like headdress prosthetics like lekku (head tails) will be permitted, but what about larger prosthetics like Darth Maul-style legs or Wookie fur?

We know Disney will have to put some limits in place—it’s just a question of what they’ll end up being.

2. Will there be a Passholder discount?

I was surprised by some of the blowback when people originally started to raise this question—the overall sentiment was why should Passholders get a break on a brand new experience outside of the parks? There’s actually a good reason to ask this question though…

That last bit is where Passholders have some questions…

Passholders already have access to Disney’s Hollywood Studios any time they can get a reservation—they’ve already paid for access to that park as part of the cost of an annual pass. While you could make the argument that part of the value of the Galactic Starcruiser visit to Galaxy’s Edge is guaranteed access to Star Wars: Rise of the Resistance and Millennium Falcon: Smugglers Run, you can’t get around the fact that some of the value included in the price is in covering the park admission.

While Disney may not need to reduce the full price of a one-day ticket from the cost of Star Wars: Galactic Starcruiser, it does seem reasonable for Passholders to get some sort of price break to cover this value difference. Will Disney do it? Considering the company’s penchant lately for cutting perks and introducing upcharges, we doubt it, but we still hope this will be factored in eventually.