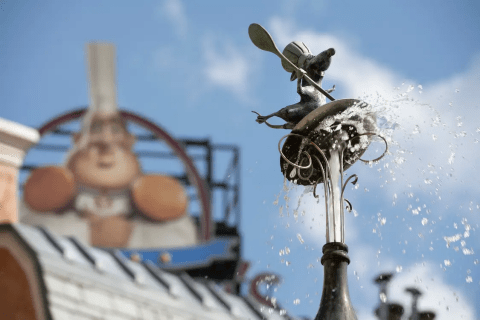 Move over Mickey… A new rodent has taken up residence in the Most Magical Place on Earth.

Not that rodent… We’re referring to the arrival of Remy’s Ratatouille Adventure at Epcot, opening October 1st, 2021, after a year-long delay due to pandemic closures.

Remy’s Ratatouille Adventure is the first in a slew of new attractions arriving over the upcoming years as part of Disney’s massive reimagining of Epcot. Tucked into a shiny new expansion to the France pavilion, the attraction joins Norway’s Frozen Ever After and Mexico’s Gran Fiesta Tour as a long awaited addition to World Showcase’s dark ride lineup.

We had the pleasure of visiting Remy’s Ratatouille Adventure early as part of an Annual Passholder preview this past weekend. The preview not only gave us the opportunity to try out the ride but also to explore the new courtyard, merchandise offerings, and (most surprisingly) to try out the new La Crêperie de Paris (offering both table and counter service crepes and galettes—we recommend the table service version for its expanded menu).

I went into our first ride of Remy’s Ratatouille Adventure with neutral expectations. I wasn’t expecting anything on the level of Star Wars: Rise of the Resistance, but I was cautiously hopeful after being pleasantly surprised by Mickey & Minnie’s Runaway Railway last year. Similar to the upcoming Tron: Lightcycle/Run, Remy’s Ratatouille Adventure is actually a carryover attraction based on Ratatouille: L’Aventure Totalement Toquée de Rémy from Walt Disney Studios Park in Paris. Thanks to a segment from the Disney+ show The Imagineering Story, I went in somewhat familiar with the ride’s history and technologies.

How did Remy’s Ratatouille Adventure fare compared to other Walt Disney World attractions? Our feelings are… complicated.

The Imagineering Story did a laudable job laying out the backstory of how Ratatouille: L’Aventure Totalement Toquée de Rémy (that’s a mouthful!) came to be. Indeed, the ride played a significant role in marking a turning point for the troubled Walt Disney Studios Park.

You can read about the ride’s history in-depth in our “Modern Marvels” exploration of Remy’s Ratatouille Adventure, but the short version is that Ratatouille: L’Aventure arrived at the tail end of a dark season in Disney’s history. The company had been riddled with a series of failures at the end of the Eisner era, a time of stringent belt-tightening and confusion for the Imagineering department. These foibles included the problematic openings of EuroDisney (now Disneyland Paris), Hong Kong Disneyland, Disney’s California Adventure, and finally—the most troubled of all—Walt Disney Studios Park.

Walt Disney Studios Park was, to put it lightly, a bit of a hot mess. The park was primarily opened to meet contractual obligations for a second gate for Disneyland Paris. To keep costs low, Disney attempted to emulate studio parks in the US like Universal Studios and Disney-MGM Studios. The problem was the studio-park model was pretty much dead, especially after the stunning success of the ultra-immersive Disney’s Animal Kingdom. Even more-so than the botched initial version of Disney’s California Adventure, Walt Disney Studios Park lacked the two primary ingredients necessary for a Disney park: magic and imagination.

One of the initial problems with Disneyland Paris was that it felt like an American contrivance rather than a truly French theme park. Disney would have to institute a number of course corrections to address this tone problem, but they ended up with a surprising win when Pixar’s Ratatouille released in 2007. While the film was successful overall, it proved a staggering success in France where it became the country’s highest grossing animated film ever.

It took six years to see Ratatouille: L’Aventure come to life, during which Disney Imagineers made their first major strides in utilizing trackless ride vehicle technology blended with 3D screens and larger-than-life sets. The ride opened in 2013 to staggering success, adding a much-needed dose of personality to the park, complete with a replica of the movie’s restaurant.

The legacy of the ride can be seen throughout Disney parks as these same technologies became key elements in Toy Story Mania, Mickey & Minnie’s Runaway Railway, and even Star Wars: Rise of the Resistance. With the announced reimagining of Epcot as well as Disney’s continued push to integrate intellectual properties into new attractions, bringing a Ratatouille attraction to the France pavilion made perfect sense. Though we had to wait a year, American fans will now have their own chance to enjoy Remy’s Ratatouille Adventure.

There’s a lot to like about Remy’s Ratatouille Adventure. It’s a thematically-appropriate addition to Disney’s dark ride lineup, and it does offer some surprises that make it stand out from similar rides at Walt Disney World. Everyone has different preferences in what they enjoy about rides—it’s part of what makes Disney parks magical--, and I have no doubt that kids and Ratatouille fans will love it.

I will admit, however, that I felt a little underwhelmed by Remy’s Ratatouille Adventure. I’ll avoid specific plot points of the ride but expect some minor spoilers to follow.

My main issue with Remy’s Ratatouille Adventure was that it lost me early by relying too much on familiar 3D movie gimmicks—indeed, it reminded me more of Universal’s Minion Mayhem ride than anything else. The heavy use of floor-to-ceiling 3D screens ends up being a double-sided coin. On one hand, using screens allowed Imagineers to use footage exactly like that in the movie to bring the characters and the world of Gusteau’s to life.

On the flip-side, despite the trackless vehicles, the ride feels like a 3D movie that just happens to incorporate movement and simulator elements. Portions of the ride feel properly immersive—particularly a wacky chase sequence through labyrinthine mouse tunnels--but other portions bring to mind dark rides of an era past, where guests simply passed through as spectators in a cartoon world. The story isn’t as coherent as other recent Disney attractions, and immersion is easily broken by simply looking around and spotting the edge of the screens.

The other thing going against Remy’s Ratatouille Adventure is that it’s arriving at Walt Disney World on the heels of one of the park’s better family attractions—Mickey & Minnie’s Runaway Railway (we’ll leave Star Wars: Rise of the Resistance out of that discussion just to keep things fair). I’ll admit, I expected Mickey & Minnie’s Runaway Railway to feel contrived, a simple Mickey Mouse overlay inserted into the bones of The Great Movie Ride. The biggest thing that caught me off-guard about that excellent attraction was its humor—like the new Mickey & Minnie cartoons, it was genuinely funny. I went from skeptical to all smiles within the first minute. It’s charm felt authentic and creative rather than relying on familiar tropes—indeed, it even purposefully pokes fun at some of those.

Remy’s Ratatouille Adventure definitely has some charm, but I felt like this was specifically due to the source material of Ratatouille. While the ride surprised me a few times, it never elicited that same childlike wonder I’ve felt in other recent attractions. Some of this may be personal preference, but from what I’ve read, I’m not alone in this assessment—an E-ticket attraction, Remy’s Ratatouille Adventure is not.

Thanks for the honest and spoiler free review. Did you have to pay to ride it, Jett?

"While the ride surprised me a few times, it never elicited that same childlike wonder I’ve felt in other recent attractions."
This honestly doesn't need the 'other recent attractions' bit at the end.
I rode this in Paris, and was underwhelmed. I rode it several times and I enjoyed it less and less each time.
This relies way too much on screens, if you ride Winnie The Pooh in Tokyo you will see a trackless ride done the Disney way (and done well).
I love Remy & Ratatouille (movie) but this ride was incredibly average, I had hoped the EPCOT version might improve, but it seems it hasn't