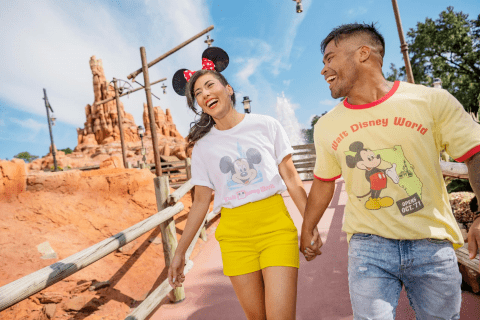 Walt Disney World can become a complicated destination when everyone wants to visit the same places. There’s good reason why certain Disney attractions, restaurants, and resorts can prove difficult to get into.

The thing is, sometimes the most popular choice isn’t the only good option…

Some of the best experiences at Walt Disney World tend to fly under the radar—worthy alternatives that may not get the same press as their counterparts but that many guests enjoy in equal measure. These underrated gems are perfect for visitors who want to skip lines, try something new, or run into issues accessing more popular experiences due to high demand.

An important note before we proceed—everyone is going to have different tastes. Diversity of options is one of the things that makes the Most Magical Place on Earth wonderful. When it comes to some of the popular experiences mentioned on this list, the goal isn’t to say that these aren’t enjoyable—rather we wanted to highlight laudable alternatives for guests to consider as options on their next vacation.

1. Jungle Navigation Co. Skipper Canteen (instead of Be Our Guest)

A trip to Be Our Guest restaurant is an incredible experience, and there’s good reason guests rave about it. The problem is Be Our Guest is so popular, getting a reservation can prove a real pain in the patella.

We’ve gushed about this Adventureland dining gem before, and we will happily do so again. The restaurant is themed charmingly after an Adventurer’s Club-style canteen (complete with plenty of S.E.A. references). The thing that makes Jungle Navigation Co. a little different, however, is that it is largely staffed by off-duty Jungle Cruise skippers.

Hilarity is likely to ensue.

I’m not a die hard Jungle Cruise fan, but there’s just something charmingly pure about the dad-joke and pun-heavy humor favored by Jungle Cruise skippers. For example, on your visit, you may get the chance to see the backside of water or The Great Wall of China.

In many ways, the skippers shine in the restaurant even more than on the ride. We’ve laughed pretty much every visit, but my favorite encounter was the time our server asked if I wanted river water or premium water. I told him I’ll go for the premium water. Minutes later, he emerged from the kitchen with a glass of bubbling, brownish-green liquid, proudly presenting my prize (the actual ingredients turned out to be a “mighty mix” of various colas). It was absolutely hideous. The server could barely keep a straight face. We lost it—Disney magic at its best.

The humor alone wouldn’t be enough for us to recommend Jungle Navigation Co—the food has been a delight every time we’ve visited. They have a nice variety of familiar staples for picky eaters, as well as African, Latin, and Asian dishes for more adventurous souls (the Kungaloosh is a wonderful dessert, as an example). The variety really sets Jungle Navigation Co. Skipper Canteen apart from other options at Magic Kingdom, making it a definite must-try for any would-be adventurer visiting Walt Disney World.

If you have a sweet tooth, Walt Disney World has you covered—especially at Epcot’s World Showcase.

The most popular sweet spot in Epcot tends to be France’s Les Halles Boulangerie-Patisserie. This charming pastry shop has been wowing guests for decades with mouth-watering tarts, mousses, and tarts, and it’s likely to only grow in popularity with the soon-arrival of Remy’s Ratatouille Adventure.

World Showcase has another bakery, however, that some guests might argue is just as good.

Kringla Bakeri Og Kafe in the Norway pavilion doesn’t fly under the radar quite as much as it used to. The arrival of Frozen Ever After turned this once-quiet corner of World Showcase into a hot spot. Still, many guest skim Kringla’s selection, settle on familiar treats like cupcakes and cookies, then go on their way without realizing the mouth-watering wonders they’ve missed in its unassuming bakery case.

Kringla’s Norwegian pastries stand out because of their wonderful subtlety—treats packed with flavor without overwhelming sweetness. While guests who prefer something more traditional might enjoy a troll horn or chocolate Kringla, our three go-to favorites are the school bread, lefse, and rice cream.

The school bread tends to get the most press—a spiced sweet roll dusted with coconut and filled with a buttery custard that defies description. It’s astonishingly delicious. The rice cream is another winner—a creamy rice pudding that gets its subtle sweetness from a topping of macerated strawberries. For more adventurous types, we also recommend the lefse—a potato-based flatbread rolled with a sweet buttery filling. Try all of them on your next World Showcase tour!

3. Docking Bay 7 (instead of pretty much everything else at Disney’s Hollywood Studios)

The food is so good, it could bring a tear to a Wookie’s eye…

Disney’s Hollywood Studios largely is not known for dining. They do have a few noteworthy restaurants like The Hollywood Brown Derby and the Sci-Fi Dine In Theater, but most of the fare surrounds familiar American food staples. Variety can be a challenge to find.

Docking Bay 7 Food and Cargo at Star Wars: Galaxy’s Edge not only brought a fresh take on dining to the park—it lets guests try food straight out of a galaxy far, far away.

It’s difficult to define the food at Docking Bay 7 because it’s purposefully designed to feel other-worldly—Disney actually struggled with the restaurant early on because people couldn’t figure out what the food was by looking at the Star Wars names alone. To break it down, Docking Bay 7 is a place where you’ll to find familiar flavors from Asian, Mediterranean, and BBQ mixed together in unexpected ways.

A perfect example is our favorite dish: the Felucian Garden Spread. In actuality, the dish is a mix of zesty plant-based meatballs, herb hummus, and a unique relish—when combined, you end up with a dish that tastes like it came right out of a science fiction novel. Another great example is the Batuuan Beef and Crispy Topato Stir-fry, a tamarind-glazed beef dish served with yucca fries, stir-fried vegetables, and pickled onions. The combination makes sense on the page but becomes Disney magic on a plate in the atmosphere of Galaxy’s Edge. The creativity of the menu quickly skyrocketed Docking Bay 7 to the top of our list for dining options at Disney’s Hollywood Studios.

Tops on my list is that grotto bar (forgot the name) adjacent to the main restaurant in the Italy pavilion. Has some of the same food choices as the main restaurant but in a far more charming setting. Great atmosphere. Menu items pair well with wine flights and other libation choices.