If EACH World Showcase Pavilion Had a 'Disney' Ride, Which Of These Would You Pick? 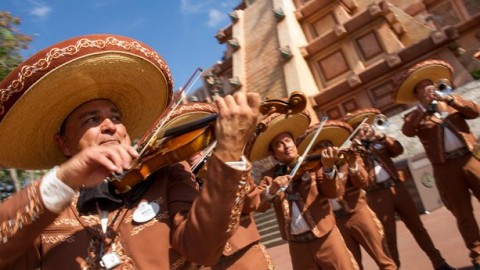 Once upon a time, EPCOT Center was about something big. A park dedicated to ideals of the future and international cooperation, EPCOT offered an inspiring, educational, and transformative dedication promising to offer hope to humanity through its epic, educational dark rides through industry and its message of global unity and cultural sharing.

Today, that M.O. has changed... If you ask CEO Bob Chapek, Epcot's multi-year, open-ended reconstruction effort has four goals: to make Epcot more timeless, more relevant, more "family," and more "Disney." That means finally sweeping through the park with a stylistic upgrade so that it's retro, but modern; classic, yet fresh. Redesigned and reunified logos, redesignated "neighborhoods," and refreshed aesthetics are a big part of the story...

... But Epcot's evolution is also hinging on something very controversial: bringing more Disney, Pixar, and even Marvel characters into the park. Plenty has been said about the role of "characters" in Epcot, and about the awkward, piecemeal inclusion that's brought seemingly-random characters into seemingly-random pavilions through the '90s and 2000s. For better or worse, the dam has broken. Characters are coming to Epcot... and even the once-untouchable World Showcase...

It seems that the "new" Epcot is about the power of stories to drive us forward (Future World) and connect us (World Showcase). So instead of throwing our hands up in defeat at World Showcase's evolution, let's play with that idea! If each of World Showcase's pavilions gained a dark ride showing what that country has contributed to Disney's stories and the lessons we learned from them, which films would represent each country's role? These are just our ideas, but we'd love to hear yours in the comments below!

Pulling from Disney's animated archive, there are surprisingly few films set in Mexico or even based on Mexican people or stories. Both Saludos Amigos (a plotless travelogue) and The Three Cabelleros are more about South America than Mexico (both were produced to bridge a cultural connection between North and South America during World War II).

So picking the right Disney story and characters to inhabit the Mexico pavilion is, frankly, pretty easy. 2017's Coco is not only a beautiful celebration of Mexican culture, Latin music, and the Dia de los Muertos celebration; it's a heart-wrenching, tear-jerking Pixar classic that's more than earned itself a place in Disney's pantheon of animated films. More to the point, at the time of its release, Coco surpassed The Avengers to become the highest-grossing film at the Mexican box office. Frankly, it's surprising that the pavilion's Gran Fiesta Tour Starring the Three Caballeros hasn't already become a Coco ride. Our guess? It's just a matter of time...

Norway is the first of Epcot's World Showcase pavilions where – if you're thinking black-and-white – there's no easy or obvious character ambassador to select from... So let's switch into "gray area" mode. Of course, those who've read our in-depth look at the pavilion's Lost Legend: Maelstrom know that Epcot's Norway was initially planned as a "Scandinavia" pavilion (celebrating the region that geographically includes Denmark, Sweden, and Norway), so it's probably okay to expand our view to that cultural collection of countries.

Of course, no Disney stories are specifically set in any of those countries either, but another "gray area" move might introduce stories that originate from that region. Specifically, we can point to stories by Danish author Hans Christian Andersen. Unlike the Brothers Grimm or Charles Perrault who merely retold stories like Cinderella, Sleeping Beauty, and Snow White that had been passed through legend for centuries, Andersen actually wrote stories like "The Princess and the Pea," "The Ugly Duckling," "The Little Match Girl," "The Emperor's New Clothes," "The Little Mermaid," and "The Snow Queen."

So basically, in the Venn diagram of "stories that originate from Scandanavia," "stories that are stylistically set in Scandanvia," and "stories that have inspired Disney films," there's just one overlap. Trust us – we know the issue. 2013's Frozen is only lightly based on "The Snow Queen" to begin with, and it's very famously set in the Scandinavian-inspired but definitely-fictional Kingdom of Arendelle. But if every World Showcase pavilion were to have a ride based on a Disney fairytale or story, then Norway's Modern Marvel: Frozen Ever After is probably as close to a cultural fit as you'll find.

The relationship between China and the Walt Disney Company could probably be the subject of a doctorial thesis paper. For many decades, Disney was a relatively verboten presence in the highly-guarded country. But China's rapid industrialization, its massive population (nearly four times as large as the United States), and its emerging "Middle Class" have created a stunning financial opportunity. A country of 1.4 billion totally-untapped potential customers is simply too great a chance to pass up.

Arguably, China was one of the primary focuses of then-CEO Bob Iger. In 2008, his Disney launched "Disney English" language training centers across the country, teaching Chinese children English... through Disney stories and characters. One-two-skip-a-few and you end up at the 2016 opening of Shanghai Disneyland – a capitalistic character outpost in the midst of Communist China (albeit, one majority-controlled by the Shanghai Shendi Group, owned by the Chinese government). Especially in the last decade, Disney has famously chased the Chinese market, selecting, producing, and even editing films specifically to pass Chinese censors and attract Chinese audiences.

That was probably the hope with 1998's Mulan, but Disney's production of a biopic of the Dalai Lama was deemed by the Chinese government saw Mulan's release (probably intentionally) buried by the Chinese New Year. Anyway, the film received surprisingly mixed reviews in China for its changes to the fable of Hua Mulan, its music, and its cartoon dragon. 2020's live action remake was intentionally rewritten to emphasize the story's Chinese elements and downplay the aspects of the 1998 original that had rated poorly in China. Unfortunately, the remake's 2020 release was scrambled by Covid-19, and frankly, received very negative reviews in China.

So given that actual Chinese audiences haven't loved either version of Disney's Mulan... should Disney's only sincere China-set film earn a dark ride in World Showcase's China pavilion? We'll leave that for you to decide...

Thanks to the Brothers Grimm, many of the world's most well-known fables and fairytales are often classified as German. Of course, many of the stories they're most well-known for are far older than the Grimm's first tome, and from across the globe. But given that their version of the stories served as the definitive versions (at least until Walt Disney's), images of "Snow White," "Red Riding Hood," "The Frog Prince," "Hansel and Gretel," "Rumplestilzken," and "Rapunzel" feel like quite Germanic tales, and  animated adaptations of the stories have usually kept Germanic architecture and atmosphere as a result.

Lately, there's been a push to consider 2010's Tangled as a potential addition to the German pavilion. It makes sense in the same way Frozen does in Norway – Tangled is Disney's reimagined adaptation of "Rapunzel," and even if its setting – the kingdom of Corona – is highly stylized and fictional, it certainly draws from the German fable's central-European look. So yeah, in terms of celebrating the stories of Germany, "Rapunzel" (and by extension, Tangled) fits the bill. Plus, it's practically tailor-made for a boat-based dark ride...

But for better or worse, we have to offer the alternative here. Wouldn't it be kind of cool – and totally fitting – for a 21st century version of Magic Kingdom's Lost Legend: Snow White's Scary Adventures to join the pavilion? A testament to Disney's first ever full-length animated feature and a recreation of a beloved lost dark ride, Snow White seems like a perfect fit for the Germany pavilion as a celebration of how the country's stories have spread around the globe.

If Epcot's Italy paviion were to host a dark ride themed to a beloved animated film set in Italy, it would have two fantastic options to choose from.

Disney's second full-length animated film, Pinocchio is considered one of the greatest animated films of all time. It also introduced "When You Wish Upon a Star" and Jiminey Cricket into Disney canon. It's also already the subject of a dark ride at Disneyland – Pinocchio's Daring Journey – that could be exported as is and still be a wonderful addition to Epcot.

Financially, 2021's Luca was dealt a pretty bad hand, being released exclusively on Disney+ and without the Premiere Access upcharge that could've at least built some U.S. box office gross for the film. It might've been a smart move, though, since insiders say merchandise from Luca is absolutely flying off the shelves, offsetting its low box office gross. The film is a low-stakes one, simply spending time in the Italian town of Portorosso with two friends who happen to be sea monsters. A wonderful ode to friendship and childhood summers, it's filled with the kind of heart, authenticity, and memories we love.

So which of Disney's Italian-set stories has earned a dark ride in Epcot's Italy pavilion? Hmm...

The great thing about a Big Hero 6 is that it is an amalgam of both Japan and the United States, and in the world pavilions, those two are side-by-side. So Big Hero 6 would work as a great in-between pavilions queue and ride, which could meld the historical architecture of the US with the modern aesthetics of Japan, before turning into the classic Japanese styles of the proper Japan pavilion.